Comet Leonard shines amid the Northern Lights and a meteor shower in stunning footage captured by a Chinese spacecraft as the bright green iceball passes by Earth for the first time in 70,000 YEARS

A Chinese satellite captured a stunning view of Comet Leonard as it made its closest approach to Earth, with a strong Aurora visible in the foreground.

Since its discovery in January this year, the comet has been fast approaching both the Sun and Earth, at nearly 160,000 miles per hour.

The image was captured by Yangwang 1, which is a small satellite launched by Chinese technology company, Origin Space, based in Guangdong, China.

It took it from a short clip while the comet was close to Earth on December 12, which is the closest it has come to our planet in 70,000 years. 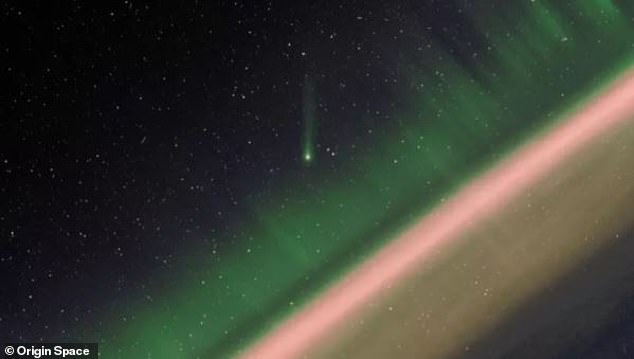 A Chinese satellite captured a stunning view of Comet Leonard as it made its closest approach to Earth, with a strong Aurora visible in the foreground

Catalogued as C/2021 AI, comet Leonard is named after the astronomer that first discovered it.

This was a year before it hit perihelion (the closest approach to the sun).

This will be its last orbit as it is on a hyperbolic trajectory, meaning it will leave the solar system after its close approach to our host star.

The images comes after two satellites designed to observe the Sun captured video of Comet Leonard as it sped past the Earth on its one way trip past our host star.

Yangwang-1 is a commercial space telescope that was launched earlier this year to image the universe in visible and ultraviolet light.

It is also working on the search for near-Earth asteroids that could one day be mined for resources and returned to Earth.

It was the first commercial Chinese space mission, and was available for use by commercial and non-commercial uses, according to Origin Space.

The spacecraft captured the image of Comet Leonard, seen amidst a sky full of satellites and distant stars, on December 12, 2021.

It is just the latest in a series of aurora images captured by the commercial telescope.

The ball of ice and dust is about half a mile wide, and was discovered in January 2021 by Gregory Leonard, who spotted it in images taken from the Mt. Lemmon Observatory in Arizona.

Back garden astronomers, telescopes around the world, and a range of space observatories have captured images of the bright green comet.

The colorised image, shared by Origin Space, shows the comet with its extended tail visible across the night sky.

STEREO-A has been focused on following the green comet since November, and the team from NASA were able to produce a short animation from dozens of images.

NASA published a ‘difference image’ to highlight ‘outbursts’ from the comet, caused when it throws off volatile material like gas and water ice – changing its brightness.

The ESA spacecraft, a joint project with the US space agency, captured a video of the comet streaking across its field of view between December 17 and 19, 2021. 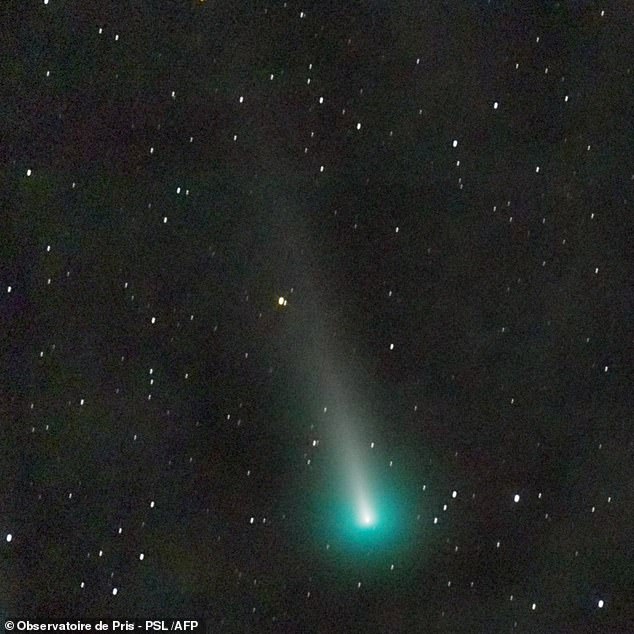 A pair of satellite designed to observe the sun have captured video of the bright green Comet Leonard, as it speeds past the Earth for the first time in 70,000 years

Comet Leonard will make its closest approach to the Sun in millennia on January 3, 2022, and ahead of that event both solar observing satellites were pointed in its direction.

NASA produced an animated ‘difference image’ with a grainy grey background designed to highlight the comet and its tail as it streaks through space.

This was created by subtracting the current frame from the previous frame to highlight differences between them.

Difference images are useful for seeing subtle changes in Leonard’s ion tail, which is the trail of ionised gases streaming from the comet’s body.

The ball of ice and dust is about half a mile wide, and was captured by the NASA Solar Terrestrial Relations Observatory Aspacecraft (STEREO-A) (right), and the European Space Agency (ESA) Solar Orbiter observatory (left)

It can be seen getting brighter and longer towards the end of the short clip.

The video captured by the Solar Orbiter Heliospheric Imager (SoloHI) which is a camera on board the Solar Orbiter spacecraft, shows it streak diagonally across its field of view, with the Milky Way, Venus and Mercury also visible.

During the short sequence, Solar Orbiter moves toward a sidelong view of the comet, revealing more of its tail as it moves through space.

More video could be published of the comet, as SoloHI continued to observe the comet until it left its field of view today.

Its closest pass of the the Sun, on January 3, 2022 will take it within 56 million miles of our star, which is about half the distance between Earth and the Sun.

If it doesn’t disintegrate on its way to the Sun, then Comet Leonard’s trajectory will fling it into interstellar space, never to return.

But according to scientists, it may already be splitting up less than a year after it was first discovered, or it will begin to split up soon. 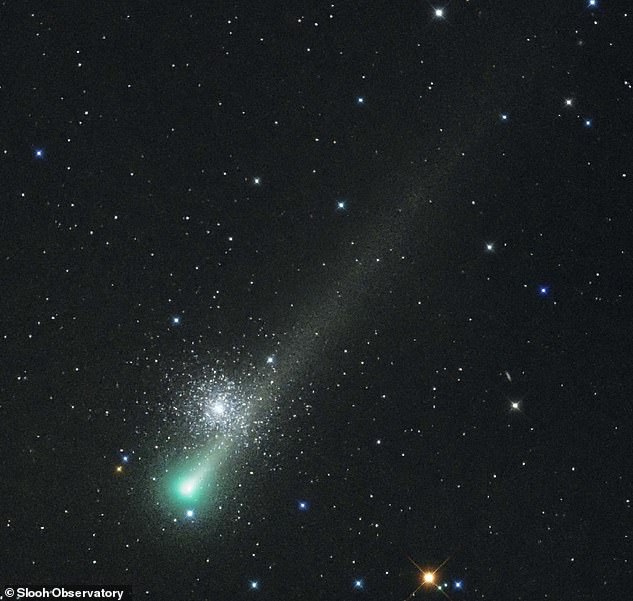 It will make its closest approach to the Sun in millennia on January 3, 2022, and ahead of that event both solar observing satellites were pointed in its direction

Comets – also called ‘cosmic snowballs’ or ‘icy dirtballs’ – are conglomerations of frozen gas, dust and ice left over from the formation of the solar system.

They go around the Sun in an orbit that’s highly elliptical, meaning they’re not perfectly circular, and can spend hundreds and even thousands of years in the darkest depths of the Solar System before returning for their ‘perihelion’.

But Comet Leonard has a hyperbolic orbit, meaning once it passes the Sun it will be ejected out of the Solar System and never seen again by Earthlings. 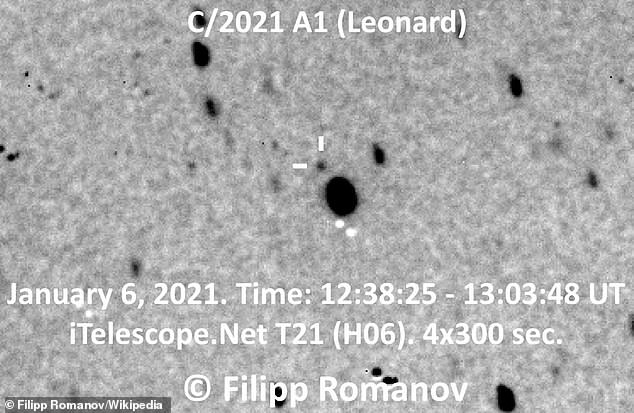 Comet Leonard was discovered in January 2021 by Gregory Leonard, who spotted it in images taken from the Mt. Lemmon Observatory in Arizona 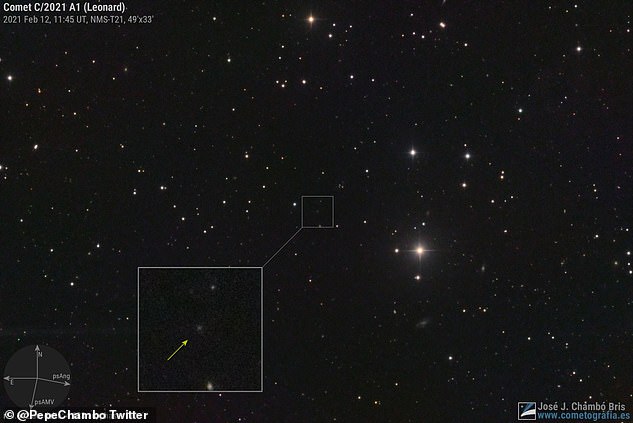 When a comet’s orbit brings it close to the Sun, it heats up and spews dust and gases into a giant glowing head larger than most planets

Comet Leonard likely spent about 35,000 years coming inbound from about 323 billion miles (520 billion km) away and may have last visited the inner solar system about 70,000 years ago.

Comet Leonard makes its closest approach to Earth on Sunday, December 12, prior to its perihelion on January 3.

The comet has a green tail because its icy rock interior heats up the closer it gets to the Sun, first emitting a blue dust, then yellow or white and finally green.

When it turns this teal colour, it means the comet is warm, contains lots of cyanide and diatomic carbon and the potential for it to break up is at its highest.