English Heritage has defended its decision to spend £2.5m ($3.3m) rebuilding a bridge in Cornwall that it says existed hundreds of years ago during King Arthur’s reign.

The new bridge is to join two parts of Tintagel castle that were once thought to be joined by land but are now separated by a 190ft (57m) gorge.

Historians have however contested the decision by saying that not only is King Arthur a legend, that there has been no crossing for thousands of years where the restoration is taking place. 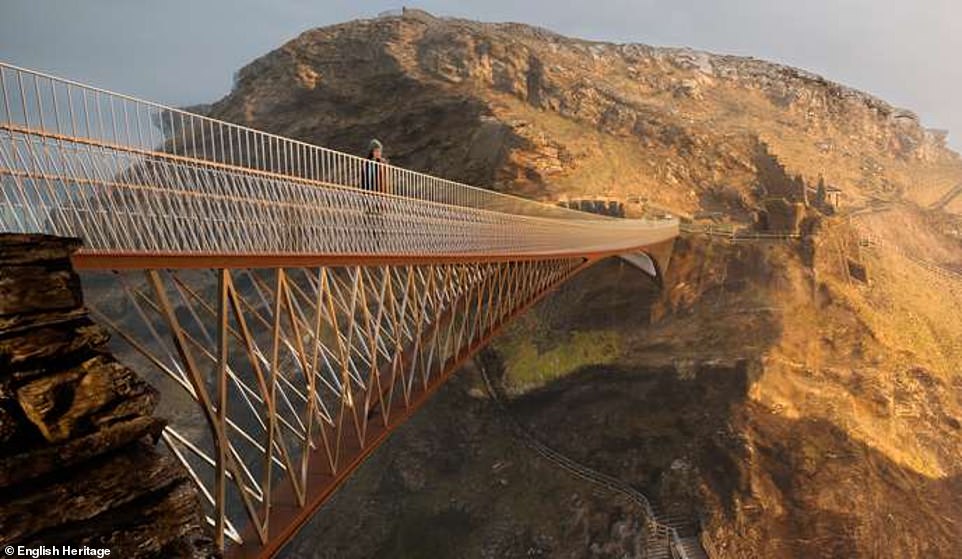 English Heritage has defended its decision to spend £2.5m ($3.3m) rebuilding a bridge in Cornwall that it says existed hundreds of years ago during King Arthur’s reign (artist’s impression)

The bridge is believed to have been extremely narrow, permanently guarded by three guards and have a drawbridge in the middle.

During the reign of King Arthur and his father before him, the bridge at Tintagel was thought to be a key part of the fortress.

But historian Nikolai Tolstoy, an author on the Arthurian legend, thinks its all fictitious assumptions.

He said to The Telegraph: ‘As every geologist knows, the gulf between the promontory and the mainland has existed since prehistoric times.

There never was a bridge linking the two features, and the assertion that Geoffrey of Monmouth refers to one is untrue.

What that notorious fabulist actually wrote was that Merlin crossed by a narrow, rocky ridge i.e., a feature very similar to the approach that exists there today.’