A mysterious set of carvings on a rock face in France has finally been revealed as a description of a tragic death at sea.

The inscription on rock in Plougastel-Daoulas, North West France, refers to a dying sailor, called Serge, more than 230 years ago.

A competition to translate the carvings, which date from about 230 years ago, was launched by local authorities back in May.

Now the inscription, which is marked with the dates 1786 and 1787, has finally been unscrambled thanks to the competition.

Two winning teams have split the €2,000 (£1,684) prize money for partially deciphering the code, which features French and Scandinavian letters. 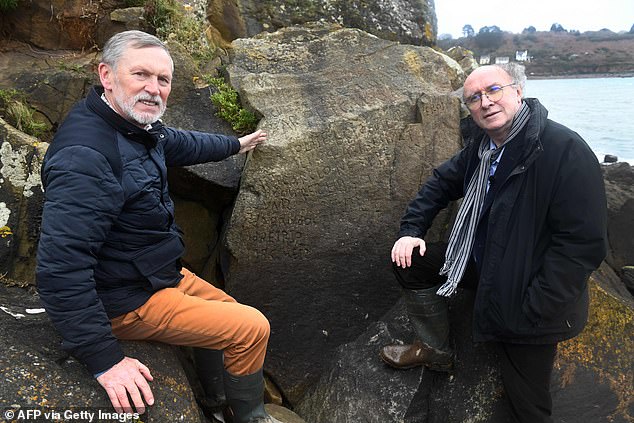 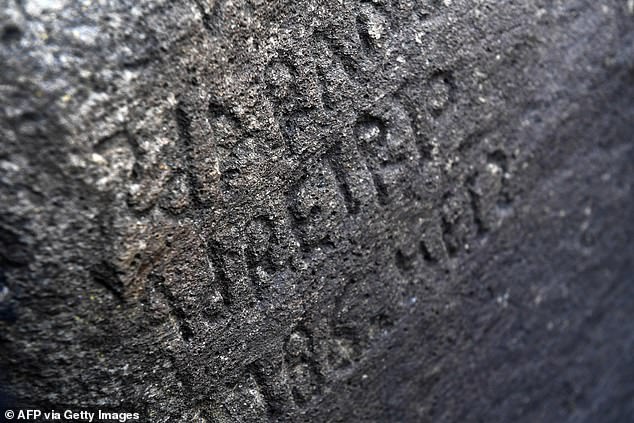 This picture taken on February 24, 2020 shows the inscription on a rock in Plougastel-Daoulas, western France 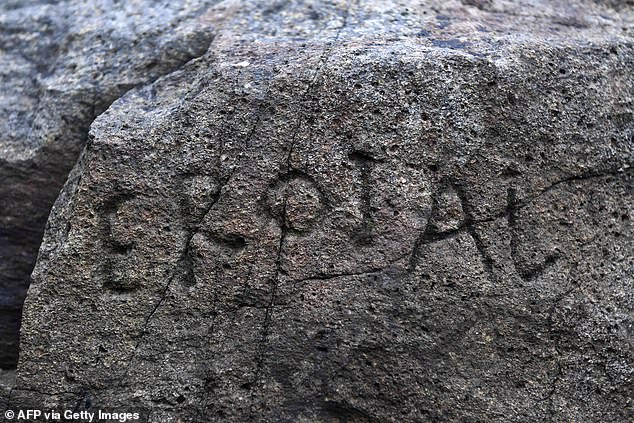 Parts of the inscription have been translated by the two teams – one as ‘Serge died when with no skill at rowing, his boat was tipped over by the wind’.

This inscription was translated by English teacher Noël René Toudic, a Frenchman who believes ‘Serge’ was a soldier who was forced to row out to sea on a stormy day.

Toudic concluded that the inscription would have been engraved by another person in honour of the dying soldier, according to the Jerusalem Post.

The other part of the inscription, translated by historian Roger Faligot and artist Alain Robet, says: ‘He was the incarnation of courage and joie de vivre [zest for life].

‘Somewhere on the island he was struck and he is dead.’

The rock on which the carvings were made is located in a remote cove that is only accessible when the tide goes out, near Plougastel-Daoulas, in Brittany.

The rock, found about five years ago, stands at about 3 feet (1 metre) high and bears 20 lines of writing.

One part of the carving is thought to read: ‘ROC AR B … DRE AR GRIO SE EVELOH AR VIRIONES BAOAVEL’. 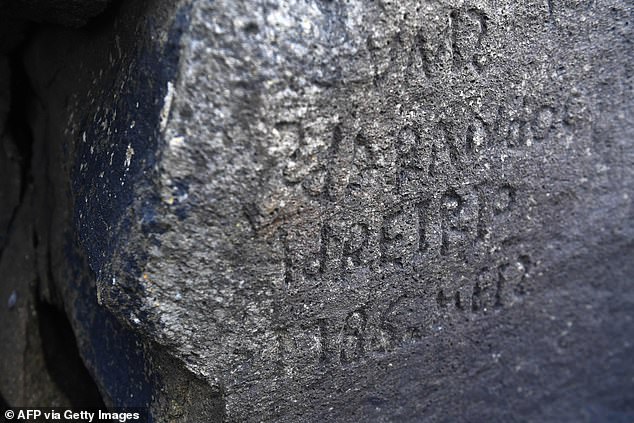 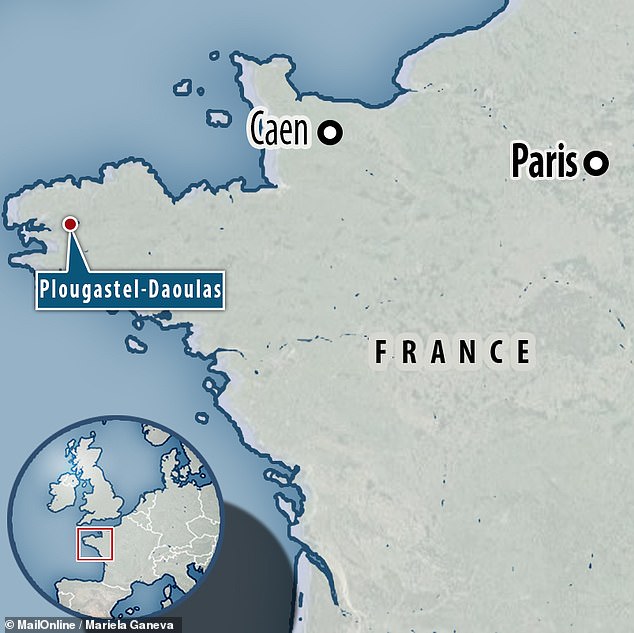 The mysteriously-inscribed rock is located in remote cove near the commune of Plougastel-Daoulas, in north west France’s administrative region of Brittany

Some of the characters carved into the rock are normal French letters depicted in reverse or upside down, while others appear to be ‘Ø’ – a vowel in Scandinavian languages including Danish and Norwegian.

The individual who wrote the engraving, it has also been suggested, may have been only semi-literate.

Therefore the intended words may have been poorly transcribed and the letters may related more to the sounds of the words as the author heard them.

The rock also features the image of a ship, complete with sails and a rudder, and what appears to be a heart covered by a cross.

The dates that accompany the unusual markings – 1786 and 1787 – are just a couple of years before the start of the French Revolution in May 1789, suggesting this event may be linked. 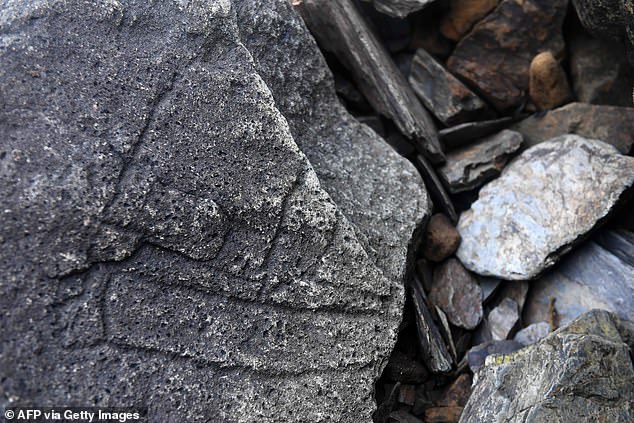 A boat engraved on the rock in Plougastel-Daoulas shows a pair of sails and a rudder. A nearby date marks the inscription as 1786 and 1787

Even local experts were perplexed by the carvings ever since they were found about five years ago, which is why the small town decided to put them out to the wider public in an attempt to translate them.

‘We’ve asked historians and archaeologists from around here, but no-one has been able to work out the story behind the rock’, said Plougastel mayor Dominique Cap last year.

‘So we thought maybe out there in the world there are people who’ve got the kind of expert knowledge that we need.

‘Rather than stay in ignorance, we said: let’s launch a competition.’

The competition received thousands of submissions but only 61 were complete translations. 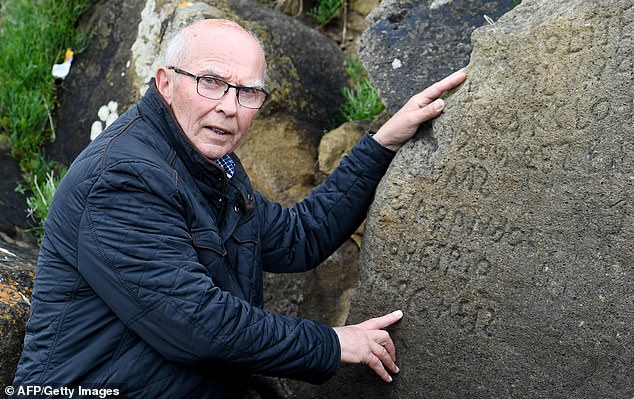 Most of the entries were from France, but others came from as far afield as the US and Thailand.

The two winning theories were the most plausible translations and appeared to support each other’s interpretation.

The competition was dubbed ‘The Champollion Mystery at Plougastel-Daoulas’ – in reference to the French scholar and hieroglyphics expert Jean-François Champollion.

Mayor Cap said there was still work to be done to completely solve the mystery of the inscriptions, but the winning competition entries mark ‘a big step forward’.

WHAT DOES THE PLOUGASTEL-DAOULAS INSCRIPTION SAY?

One part of the carving is thought to read: ‘ROC AR B … DRE AR GRIO SE EVELOH AR VIRIONES BAOAVEL’.

Some of the characters carved into the rock are normal French letters depicted in reverse or upside down.

Others appear to be ‘Ø’, which is a vowel in the Scandinavian languages of Danish, Norwegian, Faroese, and Southern Sami.

The rock features the image of a ship, complete with sails and a rudder, and what appears to be a sacred heart — a heart covered by a cross.