Endangered British hedgehogs need greater legal protection to stop the public taking them from back gardens and selling them as pets online ‘at £300 a pop’, MP warns

British hedgehogs need legal protection from being plucked from back gardens and being sold for hundreds of pounds, the government has heard this week.

MPs have argued in parliament that the British hedgehog (Erinaceus europaeus) is facing an increasing problem of being traded as pets.

The species is known as one of the UK’s best loved mammals and a ‘gardener’s friend’, but the creatures have seen a whopping 97 per cent decline since 1950.

Hedgehogs are badly threatened by road traffic, destruction of habitat with heavy machinery and the use of chemicals for intensive farming, which not only poisons insects that the hedgehog feeds on but kills the hedgehogs directly.

British MPs have warned in parliament this week that the iconic British hedgehog (Erinaceus europaeus, pictured) is being sold ‘for £300 a pop’

Hedgehogs are one of only three animals to hibernate in the UK, along with dormice and bats.

Hedgehogs are lactose intolerant, so milk should never be left out for them. Water is fine to leave them.

They don’t use their eyes to hunt due to poor eyesight, but rather their hearing and sense of smell.

They were listed as vulnerable to extinction in the UK by the Red List for British Mammals last year, prompting a petition for the government to give them greater legal protection.

The petition received more than 100,000 signatures for hedgehog protection to be increased to schedule 5 under the Wildlife & Countryside Act 1981, and the issue was debated in Parliament earlier this week.

If made, the amendment would prohibit members of the public from selling the creatures.

‘There is a problem of hedgehogs being sold,’ said Matthew Vickers, a Conservative MP for Stockton South, during the debate on July 5.

‘The problem arises when people start to snatch the hedgehogs they find at the bottom of their garden and sell them on for £300 a pop.

‘That threatens population numbers and creates biosecurity risks. Moving hedgehogs to schedule 5 would prevent it.’

Vickers said that there’s also an issue with the trading of a non-native hedgehog species, the African pygmy hedgehog, which is ‘not as cute as the great British hedgehog’.

Schedule 5 protection would offer the dwindling species protection from all intentional killing, injuring or taking, as well as prohibiting them from being sold.

‘Government’s response to the petition states that they have not previously moved hedgehogs into schedule 5 because they have no evidence that hedgehogs are being intentionally killed,’ Vickers added.

‘I am sure we are all grateful for that and I hope that people would not do something as cruel.’

A recent report from Hedgehog Preservation Society indicates there may be as few as one million hedgehogs in the UK today – a decrease of more than 50 per cent in the last 20 years.

And in the 1950s it was estimated there were 36.5 million hedgehogs in Britain – a staggering decline of 97 per cent.

‘The numbers we have also heard are truly shocking,’ said Duncan Baker, a Conservative MP for North Norfolk.

‘None of us could fail to be extremely worried that we are down to potentially our last million hedgehogs.

‘To read that they are vulnerable to extinction would have been unheard of when I was growing up. 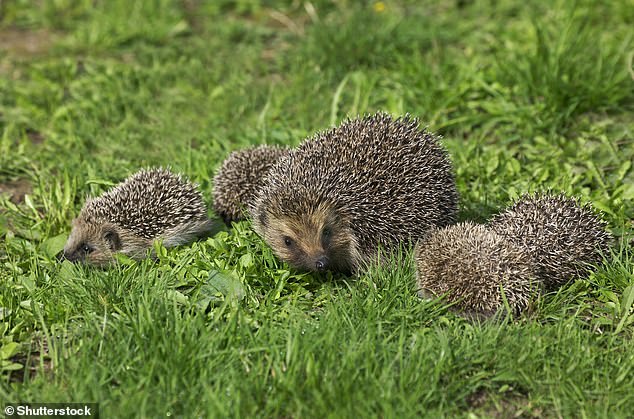 Pictured, female Erinaceus europaeus hedgehog with its adorable offspring. Hedgehogs are mostly insect eaters, but leaving them fresh water and food – like cat food, dog food or specialist hedgehog food from wildlife food suppliers – will encourage hedgehogs to return to your garden

‘A decrease of over 50 per cent in the last 20 years is something that we should all sit up and notice.’

Erinaceus europaeus, the hedgehog species that’s native to the UK, is also found throughout Europe.

Currently, the IUCN Red List, which lists the global conservation status of different species, only has it listed as ‘least concern’ as populations are stable in much of its range across the continent.

If government gives the species’ greater protection under the Wildlife & Countryside Act 1981, this current minor level of protection may be upgraded.

The hedgehog is known as the ‘gardener’s friend’ because it eats caterpillars, beetles and other critters, Baker also points out in a piece for Politics Home.

‘Combined, our gardens provide a space for wildlife larger than all our national nature reserves and so by gardening in a wildlife-friendly way we can help our prickly little friends and help protect them in our own backyards,’ he says.

According to 2018 research, the hedgehog has disappeared from almost 80 per cent of the British countryside.

The prickly mammal is increasingly moving to urban areas, which act as refuges for the small woodland creatures, University of Reading scientists said at the time.

Hedgehogs are mostly insect eaters, but leaving them fresh water and food – like cat food, dog food or specialist hedgehog food from wildlife food suppliers – will encourage them to return to residential gardens.

DOS AND DON’TS OF PROTECTING HEDGEHOGS IN YOUR GARDEN

– Put out water for drinking

– Put out a bowl of dog food or meaty cat food around dusk.

– Install, in a quiet part of the garden, a hedgehog house.

– Look to see if your hedgehog is limping or appears to be injured, or in late autumn look out for underweight hedgehogs

– Put out bread and milk

– Fork over compost heaps in case hedgehogs or other animals have taken up residence.

– Spray hedgehogs with dog or cat flea sprays. It will be detrimental to the hedgehog