The streets of London were awash with willy today (June 11) as thousands of men and women took part in the daring 2022 World Naked Bike Ride.

People cycled through the sunny capital in their birthday suits on nine separate routes, with the festivities kicking off at 11am in both Croydon and Victoria Park.

It finished at around 6.30pm, when many of the racy riders journeyed back to Croydon for a clothing-optional barbeque. Not only are participants encouraged to flaunt what god gave them, they also deck themselves out with body paint and wacky accessories, often writing slogans across their bare bodies in support of the cause.

One of the most outlandish styles spotted was from a more elderly gentleman who covered himself from head to crotch to toe in green paint, also donning some alien ears to complete the look. Another chap was seen in a full-body black lycra onesie. His face was covered but strategically placed holes ensured that a bit of nip and a lot of chopper were on display.

It wasn't just bikes that were allowed to enter either.

One nude bloke was spied expertly navigating a unicycle through the busy streets of London with his tackle somewhat painfully tucked beneath the seat.

Another showing extreme skill on the ride was the fella spotted manoeuvring his bike while lying horizontally, his stomach on the seat and his Johnson dangling dangerously close to the rear tyre.

Women too were out in force, completely starkers. One group were spotted wearing brightly coloured wigs with slogans such as "butts on bikes r badass" painted on their naked bodies. 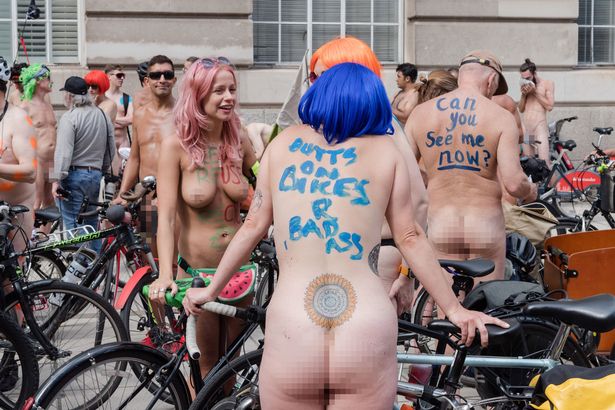 Another women used the body paint in a different way, drawing circles around her breasts and belly button to make extra sure that they were visible to those cheering on from the sidelines.

Regarding London specifically, their website reads: "In London our problem with motor vehicles is not just private cars. "Much of the threat to cyclists, along with the oil burning, pollution and congestion in Central London, comes from taxis, private hire vehicles, buses, coaches, vans, delivery vehicles, articulated lorries, tipper trucks, and people travelling in company cars on business.

"What do those drivers have in common? They are all clogging up our streets because they are paid to be there and someone else is picking up the costs. "The danger is compounded by out-of-town drivers who are not used to driving on streets where there are more cyclists than drivers and bicycles can often go faster than motor vehicles."

Last year's event saw 1,421 people undress to impress after the 2020 event was cancelled due to Covid.

The World Naked Bike Ride in London is also free to enter – good news for those wanting to take part next year.