A pigment that was popular with Renaissance artists develops a wasting disease over time that causes blue parts of historical masterpieces to turn grey, scientists say.

The costly pigment ‘ultramarine’, made from a dazzling blue metamorphic rock, catalyses its own chemical reaction that reduces colour intensity.

This affects legendary paintings including Johannes Vermeer’s ‘A Young Woman standing at a Virginal’ and Jan Steen’s ‘The Life of Man’.

But researchers think the application of red hot temperatures during the manufacturing process may prevent the pigment from losing its brilliant blue colour over time.

Using intense X-rays, scientists can now determine whether 400-year-old paintings are at risk of this ‘ultramarine disease’.

The results are important for future research on how to prevent the disease, and stop blue sections of priceless centuries-old paintings becoming dull and grey. 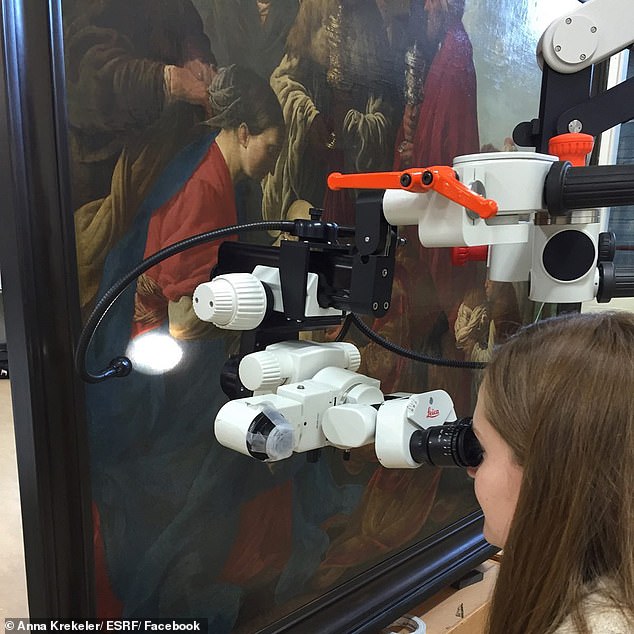 Alessa Gambardella, a researcher at the Rijksmuseum – The Museum of the Netherlands – in Amsterdam, using a stereomicroscope looking at ultramarine blue in Hendrick per Brugghen’s The Adoration of the Kings (1619)

‘In the case of ultramarine, the “dull and flat” appearance is due to the degradation in the medium – the blue of the pigment is still there and the greyish appearance in the degraded ultramarine paint is part of the original paint,’ research leader Katrien Keune at the University of Amsterdam told Chemistry World.

‘We’ve already seen in the lab that this activity is reduced after the heating, so you might expect a painting to be less prone to the ultramarine disease if the pigment is made of heated lapis lazuli. That’s something we want to research further.’

The blue semi-precious stone lapis lazuli, which was taken from mines in modern-day Afghanistan, produces the costly pigment ultramarine blue – which was more expensive than gold in the 17th century. 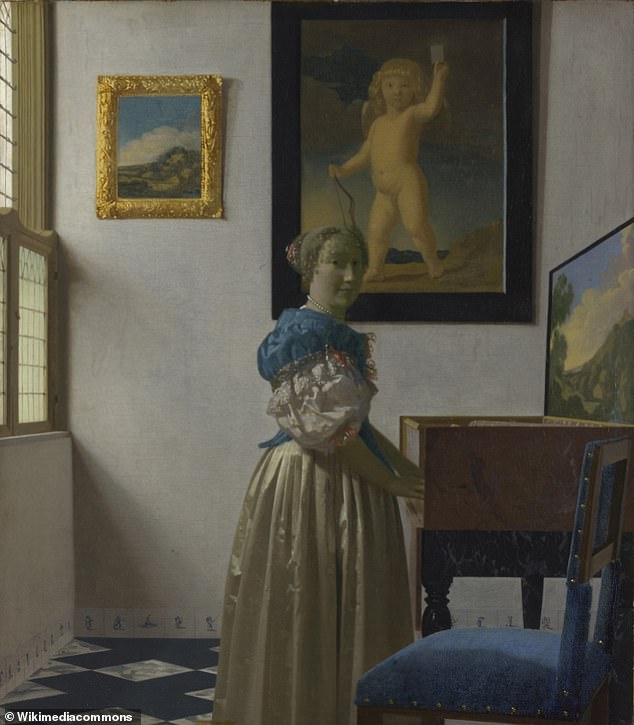 ‘Lady Standing at a Virginal’, painted by the Dutch artist Johannes Vermeer some time between 1670 and 1672, which now stands in the National Gallery, London. Pigments that received the heat treatment, as revealed by X-rays, could be a significant ‘marker’ of paintings vulnerable to the disease

Highly valued for its vibrant colour, ultramarine has been used in artworks for centuries, and it was eventually produced synthetically for the first time in the early 19th century.

Before the availability of the synthetic form, lazurite was extracted from lapis lazuli as early as the 13th century – a process motivated by a desire for the ‘deepest blue hue’.

Paint samples for the study were taken from five 15th and 17th-century paintings (location in brackets):

Its blue colour is due to the mineral lazurite, but more than half of lapis lazuli is comprised of all sorts of other minerals that are grey, yellow and white.

To remove the mineral impurities and obtain a luminous blue, the painters used the laborious and time-consuming ‘pastello extraction’.

This involved grounding the lapis lazuli stone to powder and then kneading it with a paste of resin, beeswax and oil to create a ‘fist-sized ball’.

After a week or two, the ball would be rinsed out under water with kneading motions to release the ultramarine, while the impurities would remain behind in the paste.

After filtering and drying, painters would be left with bright blue pigment, ready to be used to create their stunning artworks.

Following historical recipes, scientists at the University of Amsterdam recreated the ‘pastello extraction’ in the lab.

The team followed the instructions to the letter, even when they were ‘pretty strange’ – for example, they specified that the pigment should be washed out by ‘the hands of a young girl’.

‘This actually turned out to be a good tip,’ said Keune.

‘The men in our team were unable to cleanly isolate the ultramarine, but the female students succeeded in doing just that. It seems that this requires a certain subtle skill.’

Some ultramarine recipes also mention heating the lapis lazuli stone to incredible temperatures before it’s ground to a powder.

‘We were really curious to find out what effect this treatment – which involves heating the stone until it glows red hot – would have,’ said Keune. 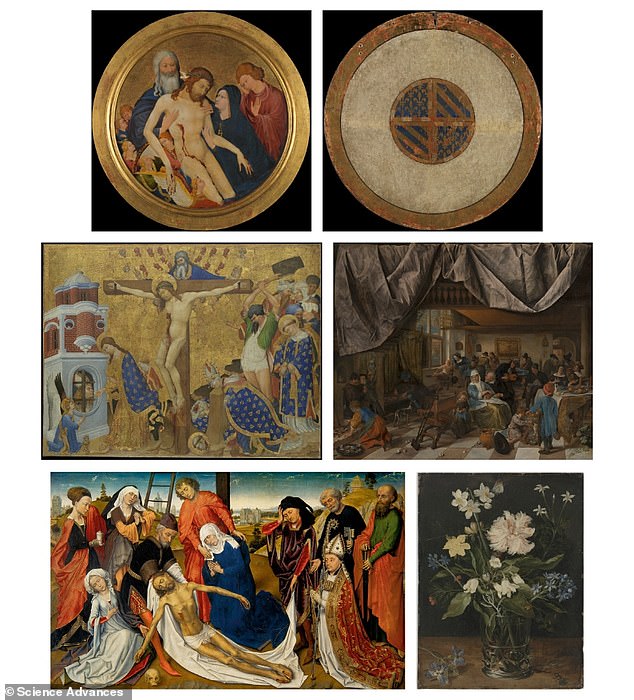 Images of the studied historical paintings, anticlockwise from the top left: Johan Maelwael’s Pieta with the Holy Trinity (also showing a coat of arms on its back, top right); Henri Bellechose’s The Last Communion and Martyrdom of Saint Denis; Rogier van der Weyden’s The Lamentation of Christ; Jan Brueghel (II)’s Still Life with Flowers in a Glass; Jan Steen’s The Life of Man. Relative sizes have not been preserved

‘In very practical terms, it soon became clear that heating the stone positively influenced the isolation of the ultramarine – without heating, the extraction process was significantly more difficult.

‘So this is an important indication of why some historical recipes say you need to heat the lapis lazuli.

‘It’s not as if this heating results in deeper blue paint, but we do see the effect on the stone itself, and the ultramarine itself is a deeper blue after the extraction.’

The team then used X-ray techniques at the European Synchrotron Radiation Facility in Grenoble, France to reveal chemical insights. 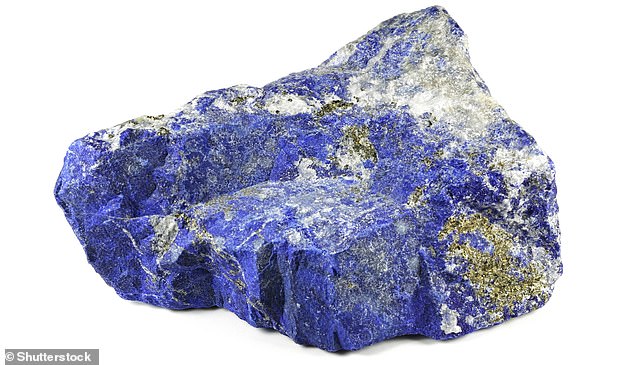 A sample of Lapis lazuli, which is taken from mines in Afghanistan. In its day it was more expensive than gold

‘Using XANES, you can show details that are very specific to the geographic origin of lapis lazuli,’ said Keune.

‘Now we’ve been able to demonstrate a clear spectral “fingerprint” for the lazurite, the actual ultramarine.

‘You will only find this fingerprint if the rock was heated during the preparation of the pigment.’

Chemical changes in sulfur atoms in the heart of the lazurite structure lead to this small but unmistakable distinction.

The results of the ‘homemade’ lab pigment were then compared to XANES analysis results for paint samples taken from five 15th and 17th-century paintings by Henri Bellechose, Jan Brueghel (the Younger), Johan Maelwael, Jan Steen and Rogier van der Weyden.

These paintings originate from the Louvre (Paris), the Rijksmuseum (Amsterdam) and the Mauritshuis (The Hague). 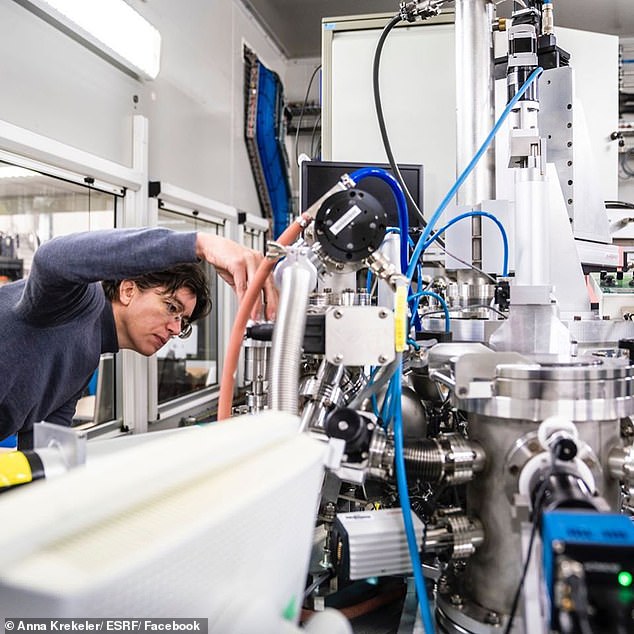 In order to reveal the heating retrospectively, Keune and her team used the advanced analysis method XANES (X-ray absorption near edge structure). This method uses soft X-rays that are generated at the ESRF in Grenoble

Not only was the characteristic XANES pattern clearly present in the historic paint samples, but ultramarine used by the old masters was prepared using lapis lazuli that had first been heated.

Thanks to X-ray examinations of paint samples, they can now look back more than 400 years to determine whether the blue stones were brought to a red heat during the pigment extraction process.

‘Through analysis of a pigment mineral, we have found a marker that tells us something about the preliminary treatment in the painter’s studio, which is amazing,’ she said.

The result is also important for follow-up research into the feared ‘ultramarine disease’ as blue sections of a painting tragically fade to grey over time.

Degradation does not always occur in all paintings that use ultramarine however – meaning finding a marker for pigment preparation is a first step toward determining a method to treat ultramarine disease.

The research has been published in Science Advances. 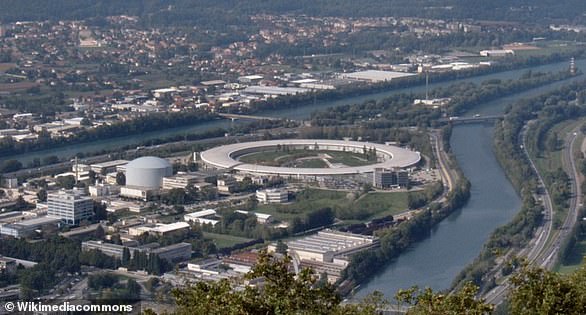 These X-rays are produced by the high energy electrons that race around a circular tunnel measuring half a mile in circumference.

ESRF functions like a ‘super-microscope’ that ‘films’ the position and motion of atoms in condensed and living matter.

This reveals the structure of matter and new insights for scientists in the fields of chemistry, material physics, archaeology, nanotechnologies and more.