Most people know earthworms wiggle to the surface after a rainstorm, but a recent downpour in New Jersey was followed by a bizarre ‘wormnado’ that scientists still haven’t puzzled out.

A Hoboken woman spied hundreds of worms in a massive spiral on the sidewalk Thursday afternoon.

The creepy crawlers weren’t moving in a circle, though individual worms were wriggling in place.

Worms are known to form ‘herds’—dense knots that can contain thousands of worms—but not form loose patterns like this. 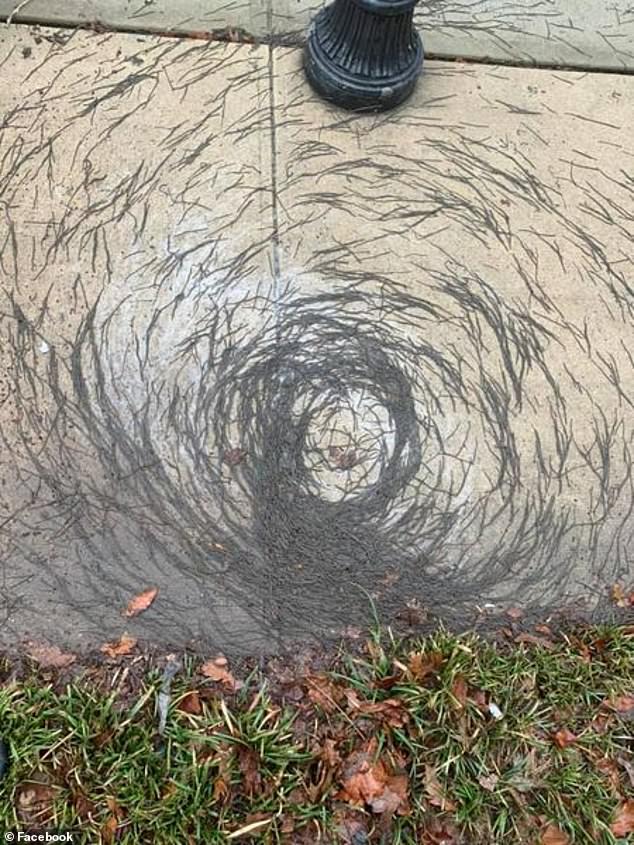 A pedestrian in Hoboken, New Jersey, spied hundreds of earthworms forming a bizarre spiral shape after a rainstorm on March 25

Kyungsoo Yoo, a biologist at the University of Minnesota, told Live Science that while worms will emerge in masse after rain, he’d never seen a cyclone pattern before.

The woman, who asked to remain anonymous, was walking her dog near the Hudson River on March 25 when she came across the mysterious phenomenon.

She sent pictures of the worm cyclone to Hoboken City Council member Tiffanie Fisher, who shared them on Facebook. 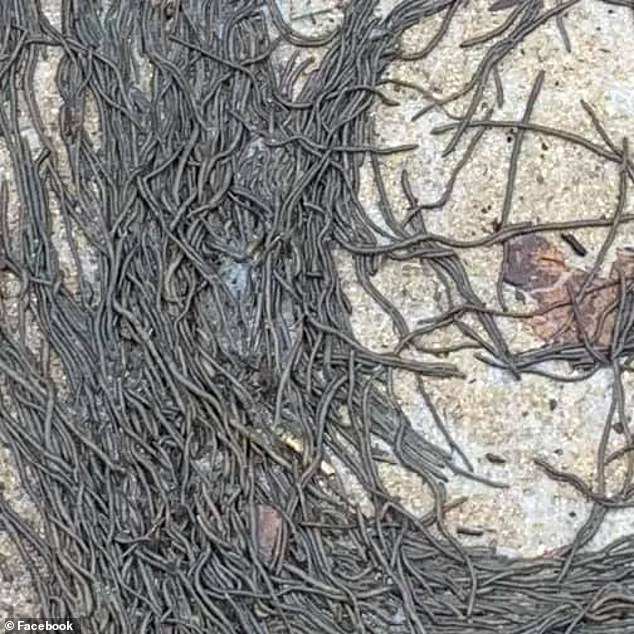 Worms breathe through their skin, so when the soil is saturated with heavy rains they come to the surface to avoid drowning. Earthworms are known to form dense blob-like ‘herds’ on the surface, but scientists say this mysterious pattern is like nothing they’ve seen

‘Has anyone ever seen anything like this?’ Fisher asked ‘This is a tornado of worms that were out this morning near Maxwell Park in Hoboken.’

Fisher added that she knew earthworms come out after it rains ‘but this is something I’ve never seen!’

According to the women who observed the ‘wormnado,’ there were lots of other worms not caught in the cluster.

‘They clung to the wall of a nearby building, and dribbled down the curb and into the road,’ Live Science reported. 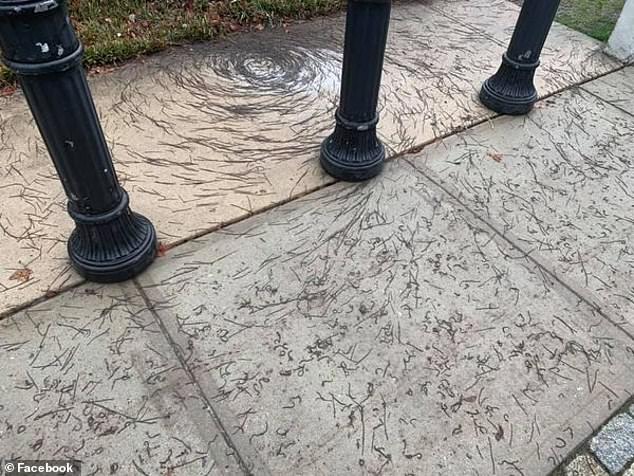 The ‘wormnado’ formed in Maxwell Park near the Hudson River. Redditors theorized the slithering creatures were disoriented by the electromagnetic field generated by the lampposts in the picture

Theories about the bizarre cluster have cropped up across the Internet, with some blaming biblical plagues and others citing the recent ‘Worm Moon,’ named by Native Americans to describe the full moon that emerges in early spring, when the ground is warm enough for earthworms to surface.

One redditor speculated the worms were in a ‘death spiral,’ a phenomenon to occur in army ants when members get separated from the main colony.

The ants lose the pheromone track of their community and begin following each other in an endless loop that often ends with them dying of exhaustion.

The phenomenon has also been observed in caterpillars and koi fish.

Another theory was that the electromagnetic field caused by a nearby lamppost was messing up the worms’ navigation.

According to a 2015 National Institute of Health report, some worms can sense these fields, an ability called magnetosensation.

Migrating toward a magnetic field helps C. elegans, a one-millimeter-long transparent roundworm, find food sources, according to biologists at the University of Texas at Austin.

The neurons that control magnetosensation in the worms is also responsible for directional orientation.

Worms breathe through their skin, so when the soil is saturated with heavy rains they come to the surface to avoid drowning.

Earthworms are usually solitary, but they will sometimes form super-dense herds on the surface to share information—using touch rather than chemical signals, according to research by biologists at the University of Liège in Belgium.

When facing extreme temperatures or lack of moisture, California blackworms will braid their bodies together to form a ‘worm blob’ that can be composed of more than 50,000 individuals.

Incredibly, the worms work collectively to move the cluster in the same direction.