Bitcoin mining uses more energy per year than the whole country of Austria – and is more environmentally costly than BEEF production, study finds

Bitcoin is the world’s most popular cryptocurrency, but new research suggests its environmental impact may be underestimated.

In a new study, academics in the US have presented ‘energy-related climate damages’ from human activity in the past five years, including Bitcoin mining.

Bitcoin mining is the energy-intensive process of creating new Bitcoins by solving computational problems that verify transactions in the currency.

The researchers say Bitcoin mining uses more energy per year than the whole of Austria and is more environmentally costly than beef production or the mining of precious metals such as gold and copper.

Rather than being considered akin to ‘digital gold’, Bitcoin should be compared to energy-intensive products such as beef, natural gas and crude oil, the experts say. 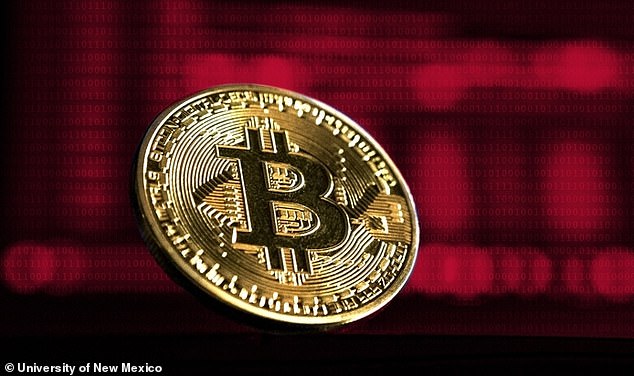 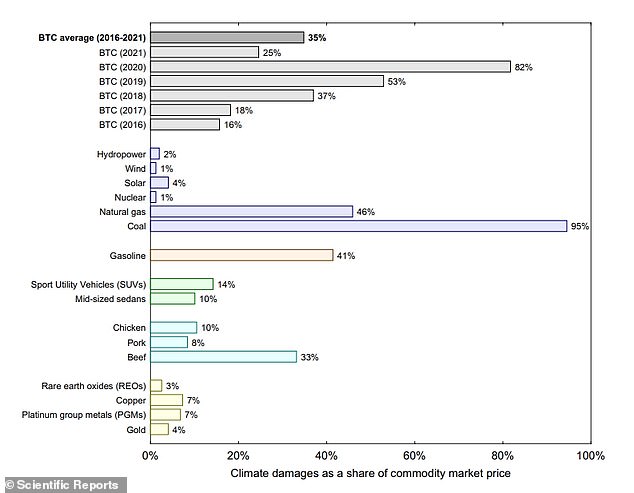 WHAT IS BITCOIN MINING?

People create Bitcoins and other cryptocurrencies through what is known as mining.

Each time a puzzle is solved, a new groups of transactions – known as blocks – are added to the blockchain (the shared transaction record).

Miners are rewarded by being issued with bitcoin.

The new study has been led by researchers at the University of New Mexico and published today in Scientific Reports.

‘We find no evidence that Bitcoin mining is becoming more sustainable over time,’ said study author Professor Benjamin A. Jones at the University of New Mexico.

‘Rather, our results suggest the opposite – Bitcoin mining is becoming dirtier and more damaging to the climate over time.

‘In short, Bitcoin’s environmental footprint is moving in the wrong direction.’

Blockchains – the technology that underpins cryptocurrencies including Bitcoin – use a model called ‘proof-of-work’ for validating new transactions.

Proof-of-work means the blockchains are secured and verified by virtual miners around the world, who are racing to be the first to solve a maths puzzle in return for money as a reward.

But proof-of-work involves substantial and expensive processing power, which only increases as more miners join the network. It’s also a painfully slow process – verifying each transaction takes about 10 minutes.

Bitcoin has the biggest energy consumption out of all the cryptocurrencies because it’s the most widely used, according to Ian Silvera, crypto lead at consultancy SEC Newgate, who was not involved with the study.

‘Bitcoin runs on a so-called proof-of-work consensus where a node must show the network its proof of work to be rewarded with a Bitcoin, a bit like handing your homework in at school and getting a mark from the teacher,’ Silvera told MailOnline.

‘Due to the very nature of Bitcoin’s anti-inflationary programming, those computational tasks get harder and harder.

A cryptocurrency is a digital currency that can be used for transactions online.

It is the internet’s version of money – unique pieces of digital property that can be transferred from one person to another.

All crytocurrencies use ‘blockchain’ and one can only be made and shared using specific agreed-upon rules. For each cryptocurrency the rules are slightly different.

People can buy Bitcoins through exchanges such as Coinbase and Bitfinex.

Bitcoin was the first cryptocurrency, created in 2009.

Other currencies such as Litecoin and Dogecoin do the same thing but have slightly different levels of inflation and rules surrounding transactions.

Currently around 270,000 transactions are taking place every 24 hours.

These currencies don’t exist as physical or digital objects. They are just a collective agreement with other people on the network that your currency was legitimately ‘mined’.

Blockchain is the record of changes in ownership of in a currency which is broadcast through the network and maintained by computers around the world.

The network works by harnessing individuals’ greed for the collective good.

A network of tech-savvy users called miners keep the system honest by pouring their computing power into a blockchain, a global running tally of every Bitcoin transaction.

However, because cryptocurrencies allow people to trade money without a third party getting involved, they have become popular with libertarians as well as technophiles, speculators – and criminals.

The environmental impact of Bitcoin has already been documented, and although it’s known to be energy intensive, the extent of its damage to the climate is unclear, the University of New Mexico researchers argue.

In the study, they present economic estimates of climate damages from Bitcoin mining between January 2016 and December 2021.

‘Globally, the mining, or production, of Bitcoin is using tremendous amounts of electricity, mostly from fossil fuels, such as coal and natural gas,’ said Professor Jones.

‘This is causing huge amounts of air pollution and carbon emissions, which is negatively impacting our global climate and our health.

‘We find several instances between 2016-2021 where Bitcoin is more damaging to the climate than a single Bitcoin is actually worth.

‘Put differently, Bitcoin mining, in some instances, creates climate damages in excess of a coin’s value. This is extremely troubling from a sustainability perspective.’

But they found that Bitcoin does not meet any of the three key sustainability criteria they assessed it against.

Calculations suggest each Bitcoin mined in 2021 generated $11,314 in climate damages, with total global damages exceeding $12 billion between 2016 and 2021.

Damages peaked at 156 per cent of the coin price in May 2020, suggesting that each $1 of Bitcoin market value generated led to $1.56 in global climate damages that month.

Finally, the authors compared Bitcoin climate damages to damages from other industries and products such as electricity generation from renewable and non-renewable sources, crude oil processing, agricultural meat production, and precious metal mining.

Climate damages attributable to Bitcoin averaged 35 per cent of its market value between 2016 and 2021. 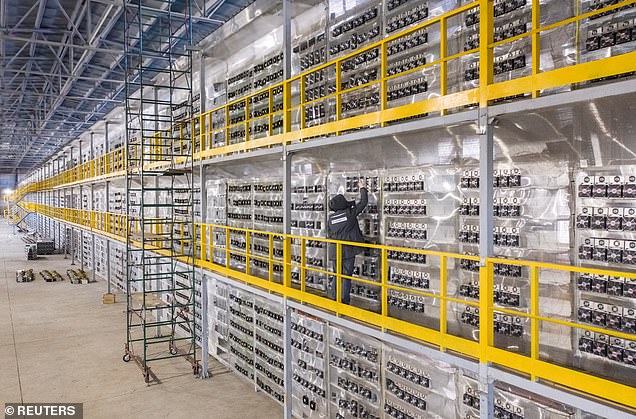 Pictured, a data centre of BitRiver company providing services for cryptocurrency mining in the city of Bratsk in Irkutsk Region, Russia March 2, 2021. The cryptocurrency is ‘mined’ by high-powered computers that solve computational maths puzzles, the complexity of which require huge amounts of energy

This share for Bitcoin was slightly less than the climate damages as a share of market value of electricity produced by natural gas (46 per cent) and gasoline produced from crude oil (41 per cent), but more than those of beef production (33 per cent) and gold mining (4 per cent).

The authors conclude that significant changes – including potential regulation of the industry – are required to make Bitcoin mining sustainable.

‘We believe that such efforts would be aided by measurable, empirical signals concerning potentially unsustainable climate damages, in monetary terms.’

Bitcoin is the world’s largest cryptocurrency – in December 2021, it had an approximately $960 billion market capitalisation with a roughly 41 per cent global market share among cryptocurrencies. 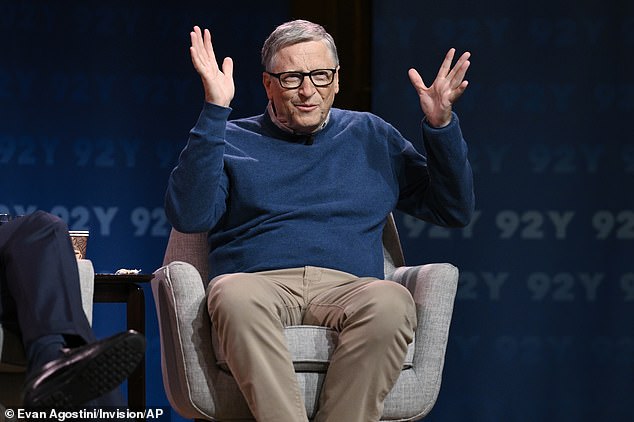 Bill Gates has said: ‘Bitcoin uses more electricity per transaction than any other method known to mankind’

‘Bitcoin uses more electricity per transaction than any other method known to mankind,’ Gates said, speaking to the The New York Times. ‘It’s not a great climate thing.’

A 2018 study published in Nature found huge farms of computers used to mine Bitcoin could produce enough greenhouse gases to raise global temperatures 3.6°F (2°C) in less than three decades.

Another report published earlier this year also found blockchains that run cryptocurrencies are vulnerable to corruption and potentially stolen funds.