Astronomers find the Moon’s ‘long-lost twin’: Large chunk of rock that broke off from our satellite four BILLION years ago is found hiding behind Mars

The long-lost twin of the moon has been spotted trailing behind Mars, according to a new study.

Scientists from the Armagh Observatory and Planetarium (AOP) in Northern Ireland used the European Southern Observatory’s (ESO) and the Very Large Telescope (VLT) to study the space rock.

The lead author of the study, Dr Apostolos Christou from the AOP, believes it is possibly a chunk of moon that was dislodged by an enormous impact during the Solar System’s formative years, around four billion years ago.

However, while the origin of this rock may be lunar, the research team say it is also possible it could have stemmed from the Martian surface. 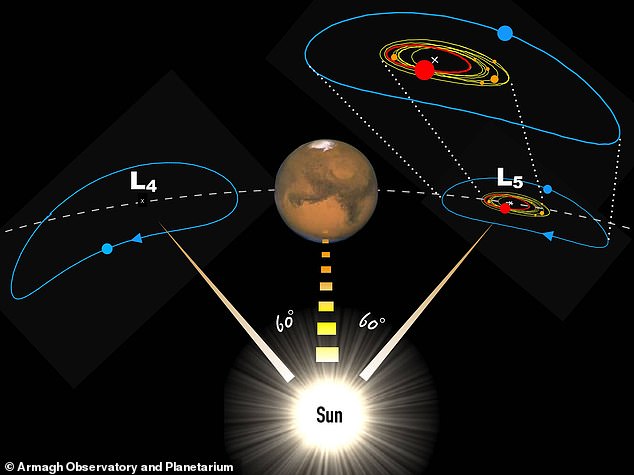 The asteroid is a Mars Trojan which orbits the Sun while trailing behind the red planet at an angle of about 60 degrees relative to the Sun, in a so-called Lagrange point. These are locations in a planet’s orbit where the gravity of the Sun and the planet balances out, allowing a rock to remain in a static location. L4 is ahead of Mars and L5, where VF31 is, sits behind Mars

‘It’s similar to the photo-IDing done by the police when chasing crooks, you try to match your data – the spectral profile – against the same type of data taken from other objects, for example other asteroids or meteorites,’ he told MailOnline.

‘None of these matches were particularly satisfactory until we included spectra of the Moon in our analysis. The similarity to parts of the lunar surface was striking.’

The asteroid is part of a group known as Mars Trojans, and their origin is a long-standing astronomical mystery.

They orbit the Sun while trailing behind the red planet at an angle of about 60 degrees relative to the Sun.

For example, if Mars reaches a point in its orbit deemed to be the same as 12 o’clock on a clock face, the Trojans will be at two o’clock.

They stay in this location because they are trapped at a Lagrange Point, a patch of space where the gravitational pull of various celestial bodies balances out.

As a result, they never go around Mars and always lurk behind it, following in the planet’s wake.

The analysis reveals that VF31 is very different in composition to all the other Mars Trojans.

This, Dr Chrisotu told MailOnline, was surprising. None of the other Trojans had any resemblance to the moon, making this object unique.

The research team speculates that the moon may have been struck by an asteroid, called a planetesimal, causing VF31 to chip off the surface.

‘The early solar system was very different from the place we see today,’ Dr Christou says.

‘The space between the newly-formed planets was full of debris and collisions were commonplace.

‘Large asteroids – we call these planetesimals – were hitting the Moon and the other planets.

‘A shard from such a collision could have reached the orbit of Mars when the planet was still forming and was trapped in its Trojan clouds.’

Although the researchers are unable to say conclusively that the space rock is a fragment of the moon, the evidence is convincing.

To test if it would even be possible for the asteroid, which is less than a kilometre in diameter, to have originated from the moon and end up in Martian orbit the researchers crunched the numbers.

Previous studies show that for a rock to escape the moon’s gravity, it would have to be travelling at 2.4 km/s (5,368 mph).

The researchers say it is possible for a rock fragment of around one kilometre in diameter to travel at this speed if the moon is hit by a projectile at least 125km (77 mils) in size, travelling at 10 km/s (22,369 mph).

Such a monumental collision would create a crater measuring 974 km (604 miles) across. 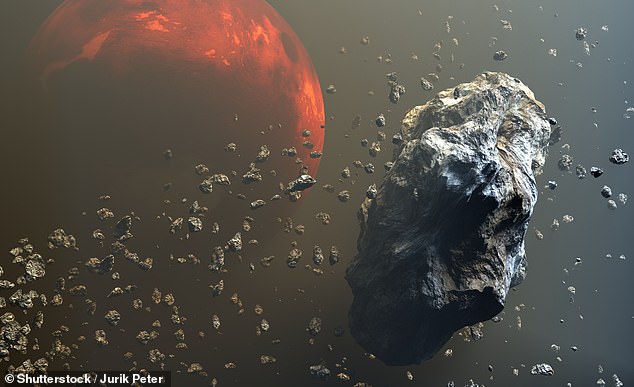 A 1km-wide asteroid called (101429) 1998 VF31 was first spotted 22 years ago and new analysis reveals it is ‘strikingly similar’ to the moon, astronomers say (stock)

‘This is considerably smaller than the size of the largest lunar basin, therefore this scenario is at least plausible,’ the researchers write in their study, published today in the journal Icarus.

While there has not been another asteroid discovered which could be an ancient remnant of the moon, the researchers believe there could well be more undiscovered lunar ‘twins’.

‘It is sensible to expect that if there is one there could be more,’ Dr Christou says.

‘However, to preserve those objects for 4 billion years until today they would need to have been trapped early on in similar “safe havens” along the orbits of nearby planets, Mars or the Earth.

‘Perhaps there is some other asteroid out there that looks exactly like this one; so far we haven’t found it. But we will keep looking.’

WHAT IS A LANGRANGE POINT?

A Lagrange point is a spot in space where the combined gravitational forces of two large bodies are equivalent to the centrifugal force of another body.

The way the forces interact creates a net directional force of zero and allows an object to stay stationary in space.

These points are named after Joseph-Louis Lagrange, an 18th-century mathematician who wrote about them in 1772.

L1, L2 and L3 are all unstable as they rely entirely on a fragile equilibrium.

L1 – Between the two objects. This location between the sun and the Earth is currently occupied by SOHO – Solar and Heliospheric Observatory and the Deep Space Climate Observatory.

L2 – The second spot is a million miles beyond Earth and in the opposite direction to the sun. This is currently occupied by NASA’s Wilkinson Microwave Anisotropy Probe (WMAP) and will be the target area for the upcoming James Web telescope.

L3 –  This spot lies behind the sun and away from Earth. This spot remains, as of yet, unoccupied.

L4 and L5 – They lie along Earth’s orbit at 60 degrees ahead of and behind Earth. 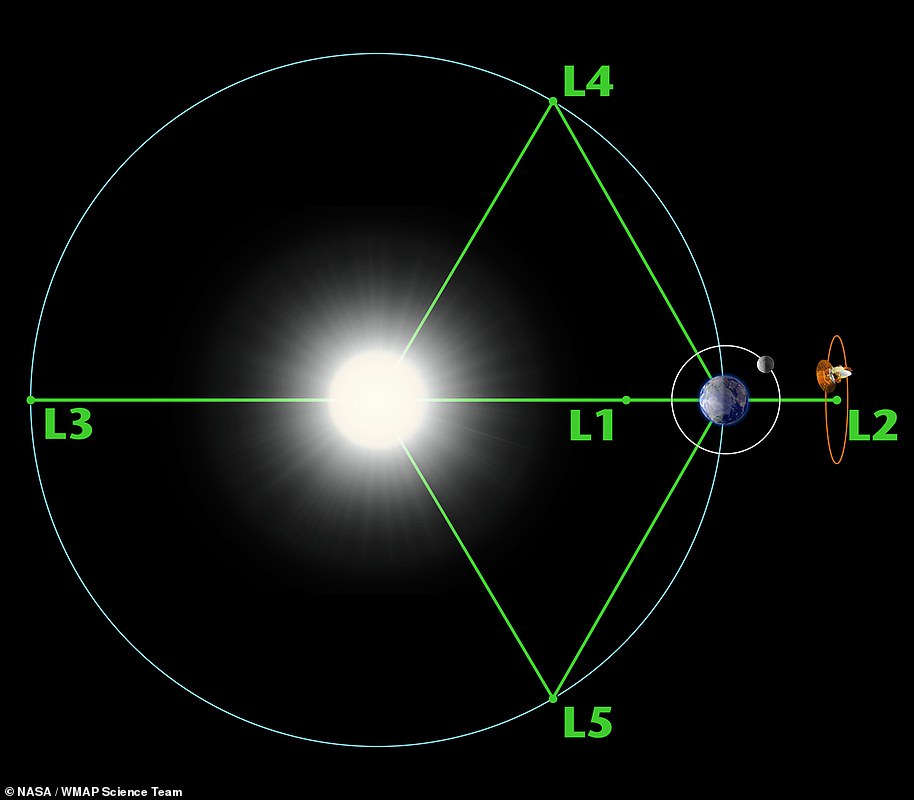