Egypt’s tourism ministry has this weekend confirmed the remarkable discovery was found by a team of archaeologists at the Abydos funerary site, in the country’s southern section. The ministry wrote in a statement: “The joint Egyptian-American archaeological mission, headed by Dr Matthew Adams of New York University, and Dr Deborah Vischak of Princeton University, working in North Abydos, Sohag, has uncovered what is believed to be the oldest high-production brewery in the world.”

The department also quoted the secretary-general of Egypt’s Supreme Council of Antiquities, Mostafa Waziry, as suggesting the brewery “likely dates back to the era of King Narmer”.

Ministry of Tourism and Antiquities

This ruler was in power more than 5,000 years ago and he has been credited with founding the First Dynasty and unified Upper and Lower Egypt.

The statement added on its Facebook page: “It is worth noting that a number of British archaeologists discovered this plant at the beginning of the 20th century, its location was not precisely determined.”

And the official comment concluded the joint Egyptian-American team “was able to re-locate and uncover its contents”. 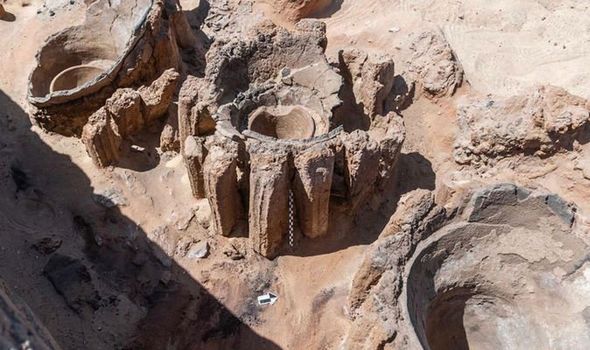 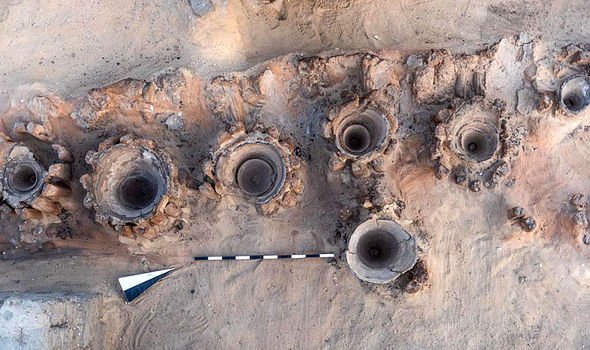 According to Mr Waziry, the brewery was constructed with a view for large-scale production of alcohol.

This is likely due to the existence of eight large areas used as “units for beer production”.

Each sector has been found to contain approximately 40 earthenware pots arranged in two rows.

A mixture of grains and water used for beer production was heated in the vats, with each basin “held in place by levers made of clay placed vertically in the form of rings”. 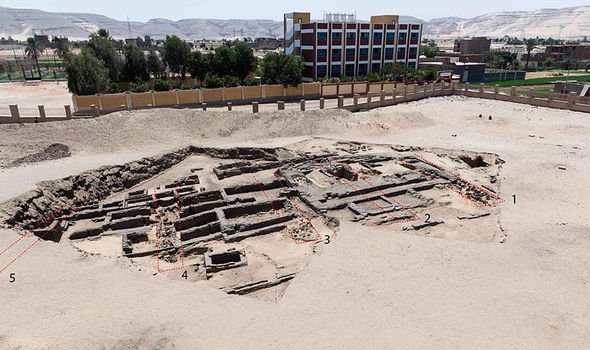 Dr Adams, who heads the joint archaeological mission, said studies have revealed beer was produced at a large scale, as much as 22,400 litres made “at a time”.

The statement quoted him as stating the brewery “may have been built in this place specifically to supply the royal rituals that were taking place inside the funeral facilities of the kings of Egypt.

“Evidence for the use of beer in sacrificial rites was found during excavations in these facilities.”

Evidence of beer-making in ancient Egypt has long been known about, with several discoveries revealing much about past production.

The Israeli Antiquities Authority announced in 2015 how pottery fragments used by Egyptians to make beer and dating back 5,000 years were discovered at a Tel Aviv building site.

Abydos, where the latest discovery was unearthed, has yielded many treasures over the years and is famed for its temples, including that of Seti I.

US archaeologists brought to light Abydos, the earliest known example of an ancient Egyptian solar barge, in 2000.

This is probably dated back to the first Pharaonic dynasty, approximately 5,000 years ago. 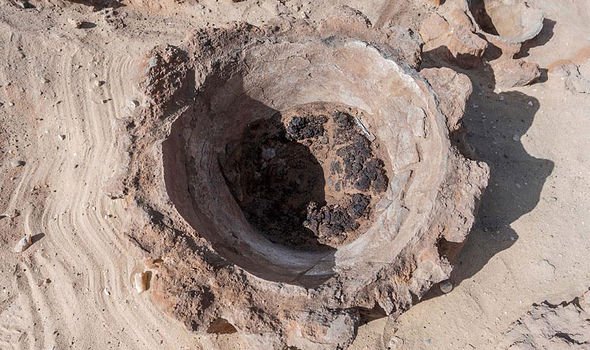 Egypt has announced several major discoveries in recent months which it hopes will spur tourism.

This sector which has suffered from several knocks, from 2011 Arab Spring uprising to the current coronavirus pandemic.

Authorities had expected 15 million holidaymakers to visit Egypt in 2020, compared to 13 million the previous year – however COVID-19 has kept tourists at bay.