Excavating Arthur’s Stone: Archaeologists carry out first dig at a 5,000-year-old tomb in Herefordshire where the legendary King Arthur is said to have defeated a GIANT

Archaeologists have started to excavate King Arthur’s stone, a tomb in Herefordshire where the legendary King Arthur is said to have defeated a giant.

The tomb, which dates somewhere between 3,700 BC and 2,700 BC, is situated on a hilltop outside the village of Dorstone in Herefordshire’s Golden Valley.

It is formed of nine upright stones, with an enormous capstone forming the top that’s estimated to weigh more than 25 tonnes.

The Neolithic monument, which has never previously been excavated, is said to have inspired the ‘stone table’ in The Lion, the Witch and the Wardrobe by CS Lewis.

Last year, experts excavated a patch of land adjacent to King Arthur’s stone, but the first ever excavations of the tomb itself have only just commenced. 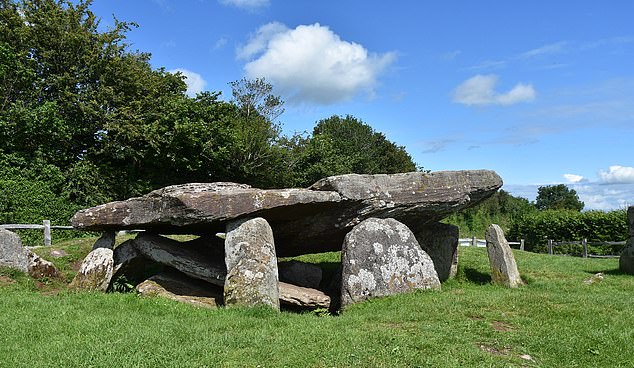 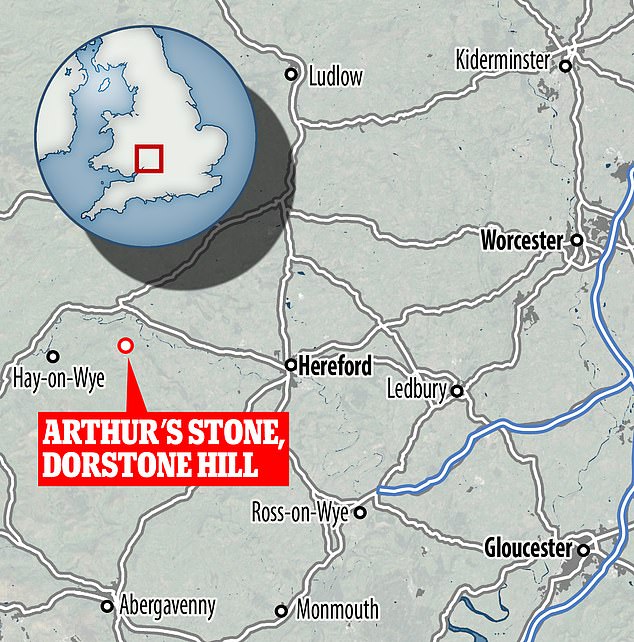 Arthur’s Stone, which dates back to 3,700BC, is on a hilltop outside the village of Dorstone, Herefordshire

What is Arthur’s Stone?

Arthur’s Stone is a Neolithic chambered tomb that is over 5,000 years old.

Today only the large stones of the inner chamber remain, although these were once covered by a long mound.

The chamber is formed of nine upright stones, with a massive capstone, estimated to weigh more than 25 tons.

It was accessed through the side of the covering mound, via the right-angled passage.

Legend has it that King Arthur slew a giant who left the impression of his elbows on one of the stones as he fell.

Archaeologists from the University of Manchester are working in partnership with English Heritage, which looks after Arthur’s Stone, to remove turf to expose and record particularly sensitive archaeological remains.

‘Arthur’s Stone is one of this country’s outstanding prehistoric monuments, set in a breathtaking location, yet it remains poorly understood,’ said Professor Julian Thomas at the University of Manchester.

‘Our work seeks to restore it to its rightful place in the story of Neolithic Britain.’

Like many prehistoric monuments in western England and Wales, King Arthur’s stone has been linked to King Arthur since before the 13th century.

According to legend, it was here that Arthur slew a giant who left the impression of his elbows on one of the stones as he fell.

More recently, the British author CS Lewis is thought to have been inspired by the area when creating his fictional world of Narnia.

Arthur’s Stone was the inspiration for the stone table upon which Aslan the Lion is sacrificed in The Lion, The Witch, and The Wardrobe.

Today, Arthur’s Stone is the remains of what was once a secretive chamber covered by a long earthen mound.

The stones that we see today formed the ‘inner chamber’ of this structure, covered in a pile of compressed turf.

It is unlikely that the monument was built solely as a tomb, and was likely also used as a focus for ritual ceremonies, English Heritage says.

Neolithic people may have gathered here on a seasonal basis, much like at Stonehenge in Wiltshire.

Similar structures in the same region in Herefordshire have been found to contain incomplete skeletal remains of several people, together with flint flakes, arrowheads and pottery.

So researchers are hopeful that the excavation will unveil new finds that can shed more light on the structure’s history and purpose. 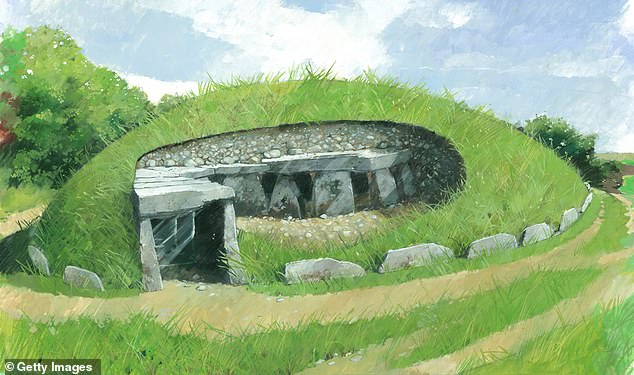 This illustration shows a cutaway reconstruction of Arthur’s Stone, as it once looked. Today, the large stones that made up the structure’s inner chamber are what’s left 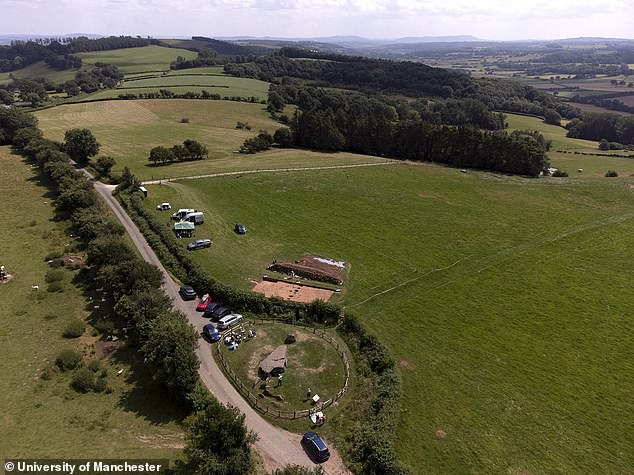 Dating to the Neolithic period in 3700BC, Arthur’s Stone is located on a lonely hilltop outside of the village of Dorstone, facing the Black Mountains in south Wales

This month, English Heritage is opening the site to members of the public as it is excavated by volunteers and archaeologists.

Free tours can be pre-booked in July through the English Heritage website.

‘Arthur’s Stone is one of the country’s most significant Stone Age monuments, and this excavation gives a really rare and exciting chance for members of the public to come and see archaeology in action,’ said Ginny Slade, volunteer manager at English Heritage.

‘Our team of wonderful volunteers will be on hand to explain the latest findings as they happen.

‘We’re asking people to book in advance to make sure everyone has a chance to enjoy this great opportunity.’ 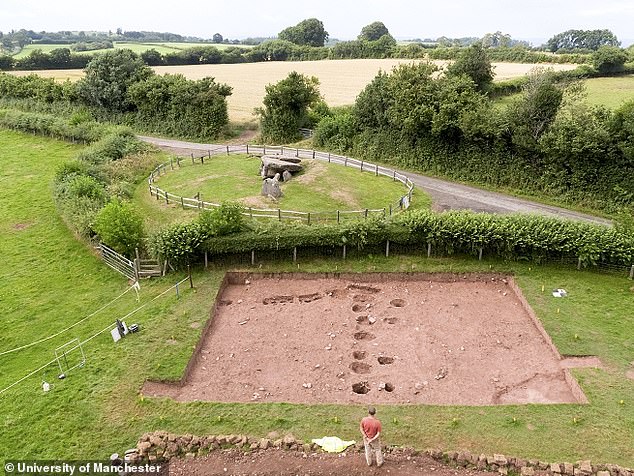 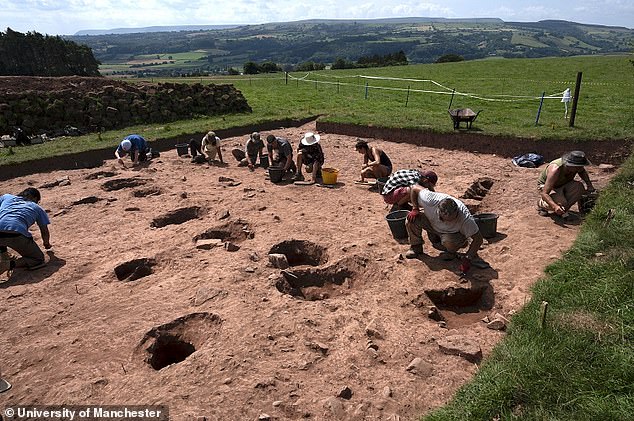 Researchers and volunteers are pictured during excavations of the plot last year, which revealed more about the origins of the Stone Age monument

The new dig follows research undertaken immediately to the south of the monument last year, which revealed the monument originally extended into a field, and so was once part of a much larger ceremonial landscape than previously thought.

The original turf-covered long mound stretched into the nearby field, but rot caused it to collapse over time. The mound was then rebuilt with a slightly different orientation, researchers said.

It’s also linked to nearby remains of two large 6000-year-old halls, called the ‘halls of the dead’, which were discovered in 2013 by a team led by Professor Thomas.

WHAT DO WE KNOW ABOUT THE LEGEND OF KING ARTHUR?

The story of King Arthur is known to children and adults alike.

But the facts around the legendary figure are mired in myth and folklore and historians generally agree that Arthur himself probably did not exist.

Instead, it is believed he may have been a composite of multiple people.

Whilst there are many version of the Arthur legend, some common threads run through them.

They stem from 12th Century figure Geoffrey of Monmouth’s fanciful and largely fictional work Historia Regum Britanniae (History of the Kings of Britain).

In 410 AD, the Romans pulled their troops out of Britain and, with the loss of their authority, local chieftans and kings competed for land.

In 449 AD, King Vortigern invited the Angles and Saxons to settle in Kent in order to help him fight the Picts and the Scots. 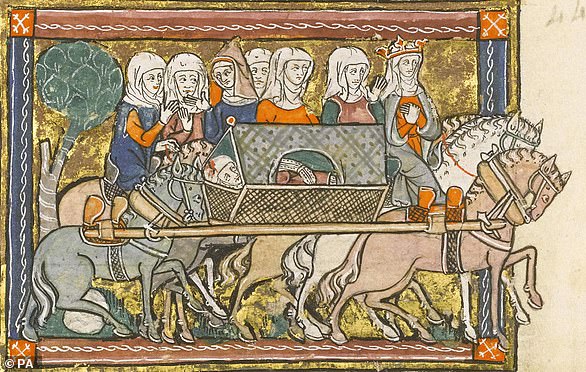 Guinevere leading a wounded Lancelot from The Rochefoucauld Grail. The illuminated 14th century manuscript containing what is believed to be the oldest surviving account of the legends of King Arthur

However, the Angles and Saxons betrayed Vortigern at a peace council where they drew their knives and killed 460 British chiefs.

The massacre was called the Night of the Long Knives, which, according to Geoffrey of Monmouth, occurred at a monastery on the Salisbury Plain.

Geoffrey claims that Ambrosius Aurelianus became King and consulted the wizard Merlin to help him select an appropriate monument to raise in honour of the dead chieftains.

Merlin suggested that the King’s Ring from Mount Killarus in Ireland be dismantled and brought to England.

The king’s brother and Arthur’s father, Uther Pendragon, led an expedition of soldiers to bring the stones from Ireland to England.

Merlin magically reconstructed the stones as Stonehenge on the Salisbury Plain around the burials of the dead British chieftains in the monastery cemetery.

Other legends say Arthur was born at Tintagel Castle in Cornwall and was taken by Merlin to be raised by Sir Ector.

Shortly thereafter, civil war broke out in England and Uther Pendragon was killed.

When Arthur was a young boy, the popular narrative says he drew a sword called Caliburn from a stone. 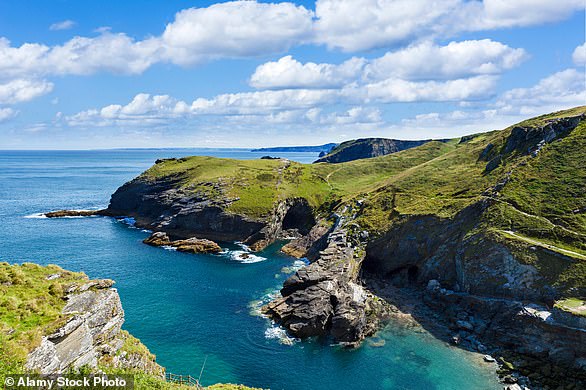 Some legends say Arthur was born at Tintagel Castle in Cornwall and was taken by Merlin to be raised by Sir Ector.

One version of the legend states that the sword was made at Avalon from a sarsen stone that originated either from Avebury or Stonehenge.

It was said that whoever drew the sword from the stone was the true King of England.

Arthur was then said to have been crowned as King in the ruins of the Roman fort at Caerleon in Wales.

In another version of the story, King Ambrosius Aurelianus led a battle against the Saxons at Badon Hill.

Aurelianus was killed and his nephew, Arthur, took control of the soldiers and won the battle.

Later, Arthur lost Caliburn in a fight with Sir Pellinore but was saved by Merlin’s magic.

Arthur received a new sword (Excalibur) and a scabbard from Nimue, the Lady in the Lake at Avalon.

The scabbard was magical and as long as Arthur wore it, he could not die.

Arthur had three half-sisters who are sometimes referred to as sorceresses.

Arthur fell in love with Morgana, not knowing that she was his half-sister and they had a son named Mordred.

When Arthur discovered the truth, he was horrified and ordered all male infants born at the same time as his son to be brought to Caerleon.

The babies were put onto an unattended ship and set out to sea, which crashed on some rocks and sank.

Mordred survived the sinking of the ship and was found by a man walking on the shore and taken home.

Arthur fell in love again with a woman named Guinevere who was the daughter of King Lodegrance of Camylarde.

They married and her dowry included a round table and many knights. Arthur established his court at Camelot

The round table became a symbol of equality amongst his knights, for no knight was seated in a position superior to another.

In addition, a mealtime rule at the table was that no one could eat until they told a story of daring.