Going ‘Flexitarian’ – eating mostly plant-based foods with the occasional bit of meat – has been championed as the way forward for a sustainable future.

But it seems the growing trend may have roots in the distant past — so distant, in fact, that the diet bears similarities with early medieval times some 1,600 years ago.

Historians have long assumed that Anglo-Saxon kings and nobles ate far more meat than the rest of the population, but a new study suggests they actually consumed a lot of vegetarian food, including leeks and whole grains.

The Cambridge researchers argue that very few people in England ate large amounts of meat before the Vikings settled — and there is no evidence that elites ate more meat than other people.

A sister study also claims that peasants occasionally hosted lavish meat feasts for their rulers, which is at odds with the belief that they were forced to hand over food to sustain the rich throughout the year in an exploitative system known as feorm or food-rent.

However, there’s no question that when these banquets were held, they were indeed grand.

People could have consumed more than 4,000 calories – around twice the recommended amount for men and women today – in just one sitting, the new analysis shows. 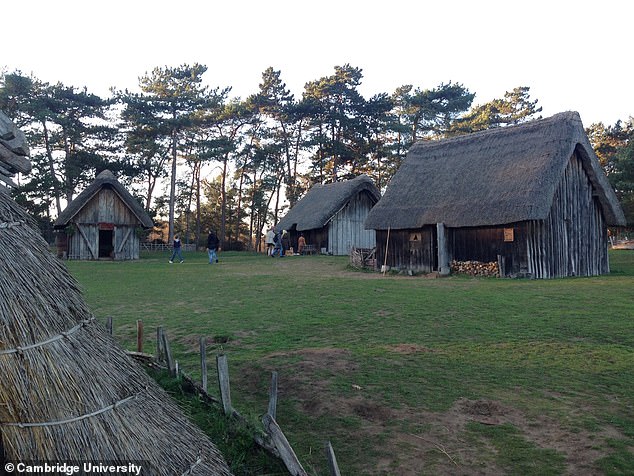 Historians have long assumed that Anglo-Saxon kings and nobles ate far more meat than the rest of the population, but a new study suggests they actually consumed a lot of vegetarian food including leeks and whole grain

Researchers began by deciphering a food list compiled during the reign of King Ine of Wessex (c. 688-726) to estimate how much food it records and what its calorie content might have been 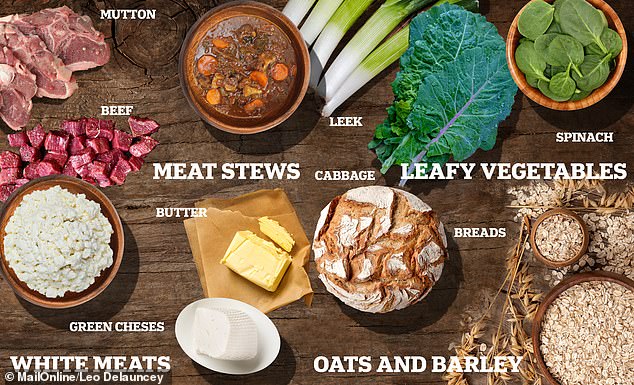 Historians have long assumed that Anglo-Saxon kings and nobles ate far more meat than the rest of the population, but a new study suggests they actually consumed a lot of vegetarian food including leeks, whole grain and a cereal-based diet

WHAT WAS SERVED PER PERSON AT A HUGE BBQ BANQUET?

The findings overturn major assumptions about early medieval English history and could transform our understanding of kingship and society at the time, the Cambridge researchers said.

They added that early medieval diets were far more similar across social groups than previously thought.

The experts also found that surviving food lists from the period are supplies for special feasts, rather than blueprints for everyday elite diets, with the large banquets serving up an estimated 2.2lbs (1kg) of meat.

Peasants didn’t give kings food as exploitative tax, the experts said, but hosted feasts, suggesting they were granted more respect than previously assumed.

Their study, by far the largest of its kind, involved carrying out isotopic analysis of over 2,000 skeletons from people buried in England between the 5th and 11th centuries.

Bioarchaeologist Sam Leggett, who is now at the University of Edinburgh, then cross-referenced these isotopic findings with evidence for social status such as grave goods, body position and grave orientation.

That surprised Cambridge University historian Dr Tom Lambert, because so many medieval texts and historical studies suggest that Anglo-Saxon elites did eat large quantities of meat.

The pair started to work together to find out what was really going on.

They began by deciphering a food list compiled during the reign of King Ine of Wessex (c. 688-726) to estimate how much food it records and what its calorie content might have been.

The researchers estimated that the supplies amounted to 1.24 million kcal, over half of which came from animal protein.

The list included 300 bread rolls so they worked on the basis that one bun was served to each diner to calculate overall portions.

They discovered that each guest would have eaten mutton, beef, salmon, eel and poultry; plus cheese, honey and ale.

The researchers studied ten other comparable food lists from southern England and discovered a remarkably similar pattern: a modest amount of bread, a huge amount of meat, a decent but not excessive quantity of ale, and no mention of vegetables (although some probably were served).

Lambert said: ‘The scale and proportions of these food lists strongly suggests that they were provisions for occasional grand feasts, and not general food supplies sustaining royal households on a daily basis.

‘These were not blueprints for everyday elite diets as historians have assumed.’

‘I’ve been to plenty of barbecues where friends have cooked ludicrous amounts of meat so we shouldn’t be too surprised.

‘The guests probably ate the best bits and then leftovers might have been stewed up for later.’ 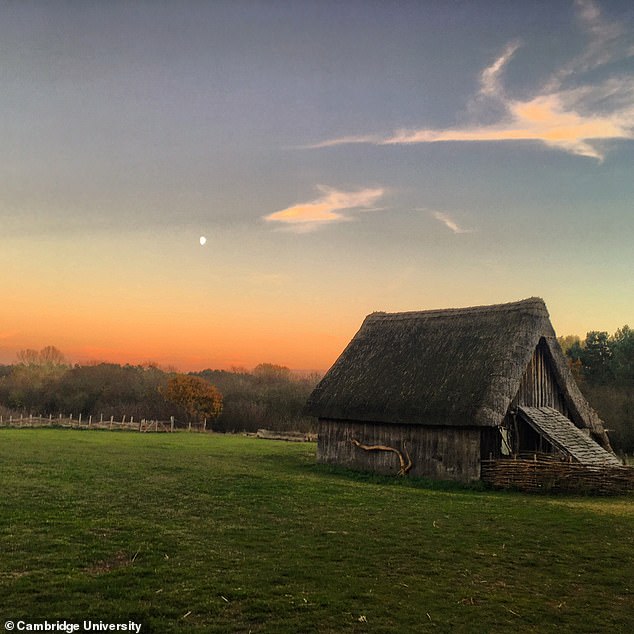 The list included 300 bread rolls so they worked on the basis that one bun was served to each diner to calculate overall portions. They discovered that each guest would have eaten mutton, beef, salmon, eel and poultry; plus cheese, honey and ale 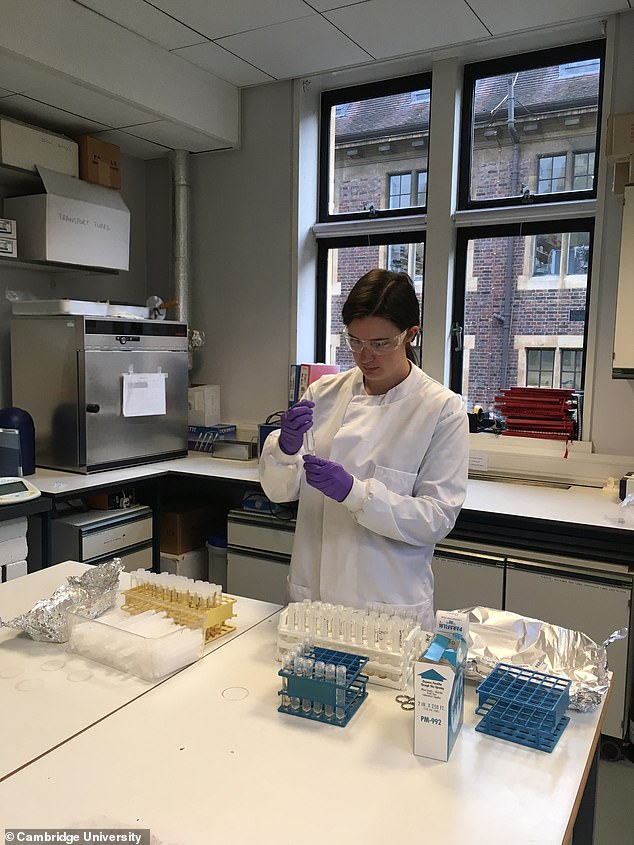 The study, which was led by bioarchaeologist Sam Leggett (pictureD) involved carrying out isotopic analysis of over 2,000 skeletons from people buried in England between the 5th and 11th centuries

In the wake of vegetarianism, veganism and the fad for ‘clean eating’, flexitarianism is growing in popularity and often seen as a viable, achievable food attitude.

Unlike many other nutritional doctrines — it lets you call the shots.

Whether you want to avoid meat apart from at the weekends, until after 6pm or just on a certain day of the week, how you approach it is up to you.

Several high-profile names have already jumped on the flexitarian bandwagon.

First embraced by the likes of Stella and Paul McCartney as far back as 2009, these days everyone from Gwyneth Paltrow and Joanna Lumley to Jamie Oliver are getting on board.

One of the main benefits of flexitarianism is that it has a whole host of health positives.

Eating less meat has been proven to lower your risk of getting diabetes, cancer and heart disease, while flexitarianism by nature ensures people are eating more vegetables.

It is also seen by scientists as a way to limit climate change, water scarcity and pollution.

A 2018 study said such diets were one of three key steps towards a sustainable future for all in 2050.

If the world moved to this type of diet, the research found that greenhouse gas emissions from agriculture would be reduced by more than half.

Leggett said: ‘I’ve found no evidence of people eating anything like this much animal protein on a regular basis.

‘If they were, we would find isotopic evidence of excess protein and signs of diseases like gout from the bones. But we’re just not finding that.’

She added: ‘The isotopic evidence suggests that diets in this period were much more similar across social groups than we’ve been led to believe.

‘We should imagine a wide range of people livening up bread with small quantities of meat and cheese, or eating pottages of leeks and whole grains with a little meat thrown in.’

The researchers believe that even royals would have eaten a cereal-based diet and that these occasional feasts would have been a treat for them, too.

The banquets would have been lavish outdoor events at which whole oxen were roasted in huge pits, examples of which have been excavated in East Anglia.

‘But these food lists show that even if you allow for huge appetites, 300 or more people must have attended. That means that a lot of ordinary farmers must have been there, and this has big political implications.’

Kings in this period – including Rædwald, the early seventh-century East Anglian king perhaps buried at Sutton Hoo – are thought to have received renders of food, known in Old English as feorm or food-rent, from the free peasants of their kingdoms.

It is often assumed that these were the primary source of food for royal households and that kings’ own lands played a minor supporting role at best.

As kingdoms expanded, it has also been assumed that food-rent was redirected by royal grants to sustain a broader elite, making them even more influential over time.

But Lambert studied the use of the word feorm in different contexts, including aristocratic wills, and concluded that the term referred to a single feast and not this primitive form of tax.

This is significant because food-rent required no personal involvement from a king or lord, and no show of respect to the peasants who were duty-bound to provide it.

When kings and lords attended communal feasts in person, however, the dynamics would have been very different.

Lambert said: ‘We’re looking at kings travelling to massive barbecues hosted by free peasants, people who owned their own farms and sometimes slaves to work on them.

‘You could compare it to a modern presidential campaign dinner in the US. This was a crucial form of political engagement.’

This rethinking could have far-reaching implications for medieval studies and English political history more generally.

Food renders have informed theories about the beginnings of English kingship and land-based patronage politics, and are central to ongoing debates about what led to the subjection of England’s once-free peasantry.

Leggett and Lambert are now awaiting the publication of isotopic data from the Winchester Mortuary Chests, which are thought to contain the remains of Egbert, Canute and other Anglo-Saxon royals.

These results should provide further insight into the period’s most elite eating habits.

The studies have been published in the journal Anglo-Saxon England.

WHAT DO WE KNOW ABOUT THE ANGLO-SAXONS IN ESSEX?

The modern county of Essex was a kingdom in the Dark Ages that included London and Middlesex.

The name Essex means ‘Land of the East Saxons’, who settled the region after migrating from North-West Germany and sailing up the River Thames.

The first king was a man named Aescwin, who lived in the mid Sixth Century. He claimed that the Saxon god, Saxnot, was his ancestor.

The kings are thought to have lived at Cripplegate in London and their Royal monastery was at St Paul’s Cathedral.

The kings often shared their kingdom between brothers and the most famous King of Essex was King Saexa.

He ruled from 600 to 616 AD, during which time he converted to Christianity and helped St Mellitus set up St. Paul’s Cathedral in London.

He died in 617 AD and some researchers believe he was buried in Westminster Abbey.

Others argue that he was probably buried in the Royal grave excavated at Prittlewell.

The most recent findings suggest that, rather than the burial site of King Saebert, the grave in fact belonged to his brother, Prince Saexa.

The date of the chamber, now known to be between 580AD and 605AD, rules out that it contained King Saebert, as previously thought.

Experts now believe his brother, Prince Saexa, was the one given such a grand send-off.

Royal families emerged in Anglo-Saxon times in Kent, Essex and across south-east England.

Saebert and Seaxa’s mother was from the Kentish royal family, but their maternal aunt, Bertha, was a French princess who married into their royal family and brought her Christian beliefs with her.

That may explain the gold crosses on the prince’s eyes and the coins in the chamber, which are clearly Christian, while the very idea of a burial chamber is Pagan.