A recently discovered prehistoric species of scorpion may have been one of the first creatures to leave the sea and venture on to land, a new study claims.

Researchers from Otterbein University, USA say the creature would have lived about 437 million years ago during the Siluarian period.

It’s called Parioscorpio venator and is the oldest-known scorpion so far discovered by scientists. It was found in Waukesha, a county in Winsconsin, USA.

As the fossil record is limited for the period it lived, researchers say it is unclear exactly how or when it adapted to life on dry land. 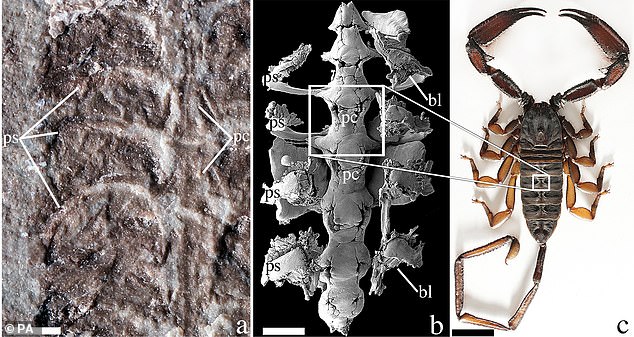 This image shows the fossil record of a new species of prehistoric scorpion, with detail of the medial region showing pulmo-cardiovascular structures

Palaeontologist Andrew Wendruff, an author on the study, said the discovery of two very well preserved fossils was an exciting development.

On close examination of the fossils they found that they were both a member of a previously-unknown scorpion species.

The creatures have compound eyes, as well as characteristics found in present-day scorpions, such as a tail terminating in a stinger.

It also shows details of internal anatomy, including narrow, hourglass-shaped structures that extend along much of the middle part of the body.

These structures are very similar to the circulatory and respiratory systems in present-day scorpions, as well as those of modern horseshoe crabs, the authors say.

The new study into the prehistoric creatures says they had no lungs or gills, which is evidence that they may not have been ‘fully terrestrial’ but did spend time on land. 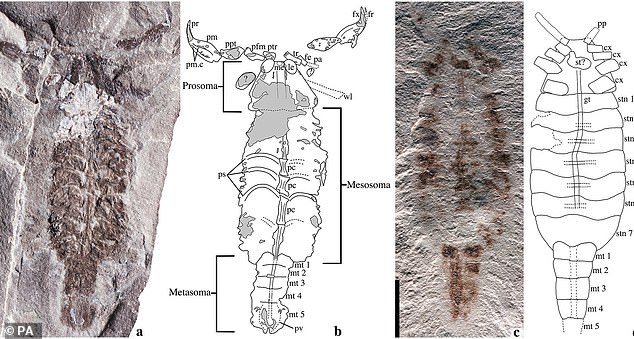 This shows an interpretive drawings of the holotype and paratype of the new scorpion. Researchers from Otterbein University, USA say the creature would have lived about 437 million years ago during the Siluarian period and had no lungs or gills

Their similarity to horseshoe crabs, which can breathe on land, suggests they may have forayed onto land for extended periods of time, the authors claim.

‘Anatomical details preserved in P. venator suggest that the physiological changes necessary to accommodate a marine-to-terrestrial transition in arachnids occurred early in their evolutionary history.

‘The close similarity of its preserved pulmonary-cardiovascular structures with those of extant scorpions hint at the possibility of extended stays on land.’

The research has been published in the journal Scientific Reports.

Scorpions are a member of the arachnid family, a cousin of the spider and date back more than 400 million years. 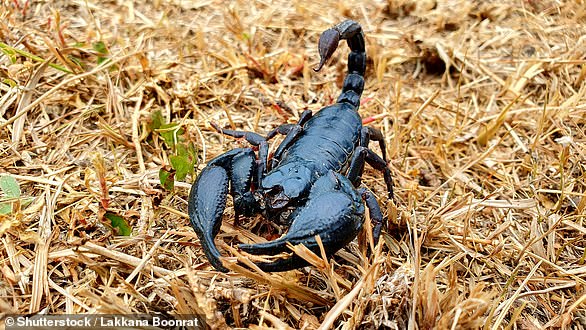 The picture of a black scorpion on the ground

They have eight legs, grasping pedipalps – appendages similar to legs at the front of their head – and a narrow segmented tail that ends in a curve.

There are almost 2,000 scorpion species, but only 30 or 40 have strong enough poison to kill a person.

Scorpions have been found on all major land masses except Antarctica and New Zealand although they didn’t occur naturally in all places.

They were accidentally introduced to Great Britain, Ireland, Japan, South Korea and a number of other islands as a result of human trade.

They are a carnivore and live to up to eight years depending on the species.

They eat insects but their diet can be variable and they can slow their metabolism when food is scarce.

This is one of the things that allow the arthropods to survive in some of the harshest environments on Earth.