Pet food is harming the planet: Industry churns out more greenhouse gases than the Philippines every year – and uses enough farmland to cover the UK twice over

According to scientists from the University of Edinburgh, the land needed to make an ample supply is twice the size of the UK.

The industry also churns out 106 million tonnes of carbon dioxide a year, making the dry pet food industry more polluting than the Philippines. 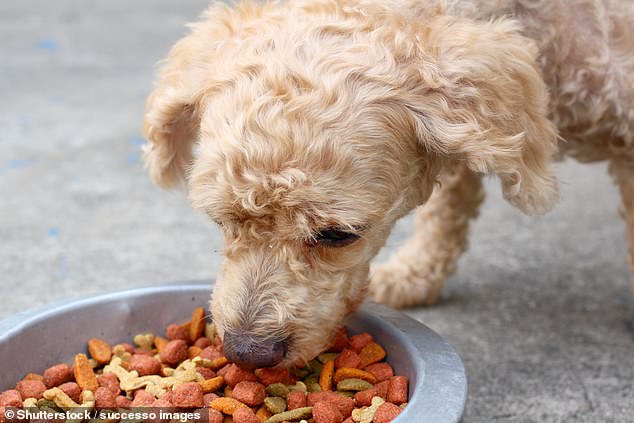 According to scientists from the University of Edinburgh, the land needed to make an ample supply is twice the size of the UK. The industry also churns out 106 million tonnes of CO2 a year (stock)

According to the researchers, writing in the journal Global Environmental Change, if the industry was a nation, it would be the sixtieth biggest emitter of greenhouse gases in the world.

Pet food contributes around one-ninth of the CO2 every year as the aviation industry.

As part of their study, the team looked at 280 popular dry pet food brands sold in both the US and Europe.

The scientists focused on dry food as it is consistent, easy to analyse and accounts for the vast majority (95 per cent) of all pet food sales.

Analysis revealed that around half of the dry food is made of products derived from crops, such as maize, wheat or rice.

Cats, unlike dogs, are notoriously unfriendly and hard to win over, even for their owners.

Now scientists have discovered a sure-fire way to win a feline over, and it centres around partially closing your eyes.

The subtle movement of a ‘slow blink’ is the cat equivalent of a human smile and allows a rapport to build up between human and animal, scientists say.

A slow blink is defined as bringing the eyelids together, but not completely shutting the eye.

Researchers say the eye lids should come slightly together, like they do during a relaxed smile, and then close the eye completely for a couple of seconds.

The other half is an amalgamation of animal products.

Once the researchers knew what the food was made of, they set out gauging how environmentally costly it is to produce the volume of these products.

They calculated the current level of dry pet food consumption requires up to 49 million hectares (189,190 square miles) of land, which is around twice the size of the UK and accounts for one per cent of the world’s agricultural land.

It is also approximately the same size as the states of Ohio, Mississippi, Louisiana and Pennsylvania combined.

Water alone is a major concern for the long-term viability of this mass farming.

According to the analysis by the researchers, dry pet food needs 11 cubic kilometres of freshwater a year, almost the same amount of water as is in Lake Windermere.

However, the true environmental cost of the pet food industry will be much larger than the reported figures, as the study did not account for wet food or food for other animals.

Dr Peter Alexander, co-author of the study from the University of Edinburgh, said: ‘Even accounting for the use of by-products in pet foods, the feeding of companion animals plays a role in environmental change.

‘This is a topic that has been previously overlooked, but we have shown that pets and how they are feed should be considered alongside other actions to reduce climate change and biodiversity loss.’

The emissions from pet food are also only likely to increase as pets become more and more popular, creating millions more mouths to feed, especially in the Asia-Pacific region.

‘”Premiumization” of pet foods, i.e. a move to higher cost products with more expensive ingredients, is increasing and is the main driver of pet food growth in the developed world as motives influencing choice of pet food by owners’ begin to mirror their own,’ the researchers write in the study.