Amazon deforestation hits all-time high for first half of the year with 1,539 square miles of rainforest destroyed – as environmental campaigners warn the ‘lungs of the planet’ are being pushed to the brink of collapse

Authorities say an area 1,539 square miles (3,988 square km) was deforested in Brazil’s portion of the Amazon from January to June this year.

This area, five times the size of New York City, marks the highest deforestation rate recorded for the first six months of the year in the Brazilian Amazon, Greenpeace says.

Deforestation is the process of permanently removing trees, often to make way for planting crops and cattle grazing to accommodate the human demand for food.

During deforestation, trees and vegetation are burnt or cut down, obliterating the forest habitat and causing a loss of biological diversity, conservationists say. 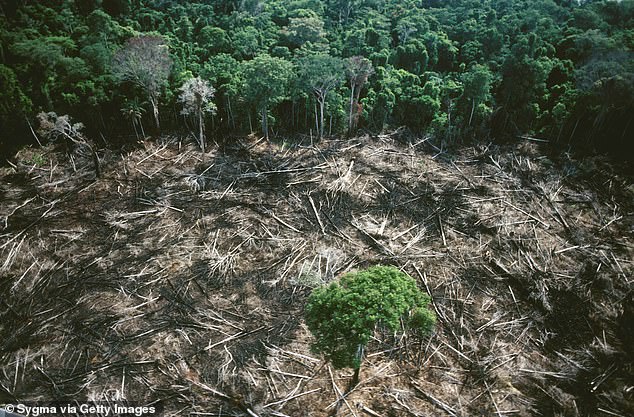 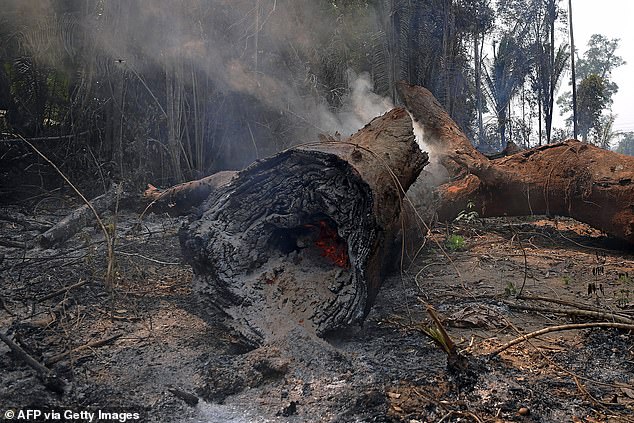 During deforestation, trees and vegetation are burnt or cut down, obliterating the forest habitat and causing a loss of biological diversity 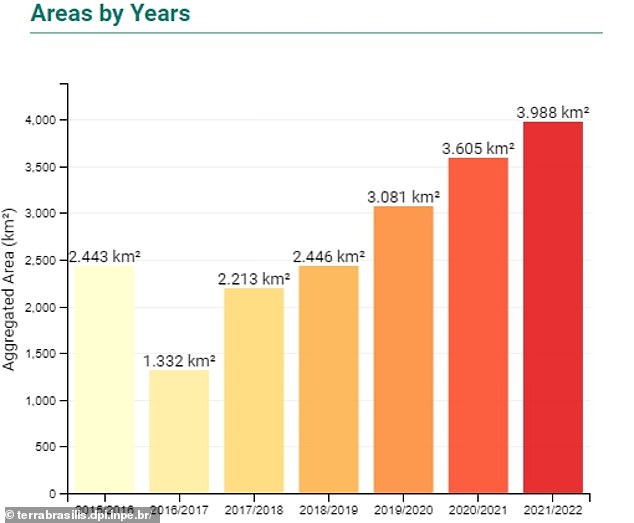 An area 1,539 square miles (3,988 square km) was deforested in Brazil’s portion of the Amazon from January to June this year – higher than ever before

Deforestation – the permanent removal of trees – is a major environmental issue, causing destruction of forest habitat and the loss of biological diversity.

A big driver of deforestation is the deliberate ignition of the rainforest’s canopy to clear space for agricultural crops and cattle.

Unfortunately, carbon stored in the trees has the potential to be released back into the atmosphere as carbon dioxide (CO2).

Dubbed the planet’s lungs, forests act as huge carbon sinks that absorb carbon dioxide from the atmosphere as they grow.

The new data has been published by Brazil’s National Institute for Space Research (Instituto Nacional de Pesquisas Espaciais, or INPE).

Commenting on the data in a statement, Greenpeace said the Amazon, the word’s largest rainforest, often referred to as the ‘lungs of the planet’, could soon be ‘pushed to the brink of collapse’.

‘Destroying the Amazon as the climate crisis rages is like taking a hammer to the air-con in a room that’s already getting hotter,’ said Louisa Casson, Greenpeace UK’s head of forests.

‘With every hectare of forest that gets chopped down, we’re pushing this climate-critical ecosystem closer to the brink of collapse while also threatening the rights of Indigenous Peoples.’

Forests are vital in the fight against the climate crisis, because they are carbon sinks – they’re capable of capturing and storing large amounts of carbon dioxide (CO2).

Trees help stop climate change by removing CO2, a greenhouse gas, from the air, using it for photosynthesis and releasing oxygen into the atmosphere.

The Amazon spans 2.1 million square miles across eight countries – Brazil, Bolivia, Peru, Ecuador, Colombia, Venezuela, Guyana and Suriname – but the majority, around 60 per cent, is within Brazil’s borders.

The new data follows domestic and international concern over Brazilian President Jair Bolsonaro’s calls to clear land in the country’s proportion of the Amazon to drive economic development.

‘Governments and corporations need to stop fuelling the fire and pile pressure onto Bolsonaro’s government to make it stop,’ said Casson.

In a blog post earlier this year, Greenpeace called Bolsonaro ‘a catastrophe for the environment’ who has an ‘anti-environmental agenda’. 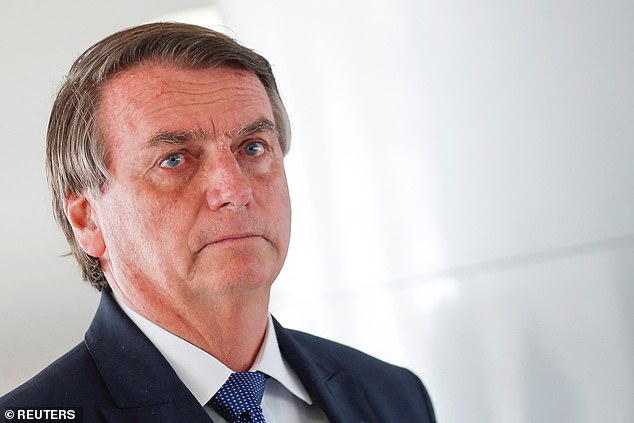 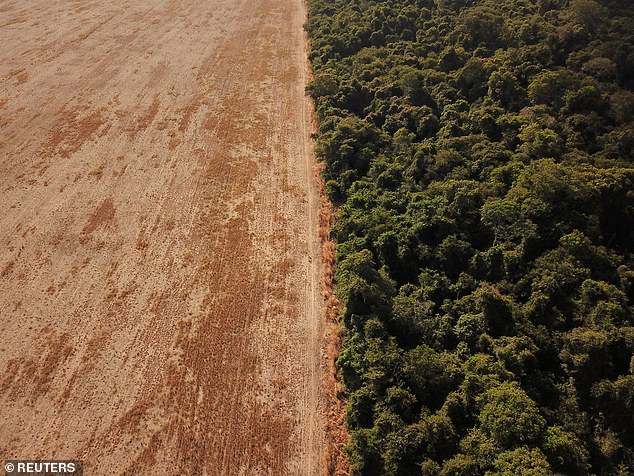 An aerial view shows deforestation near a forest on the border between Amazonia and Cerrado in Nova Xavantina, Mato Grosso state, Brazil July 28, 2021 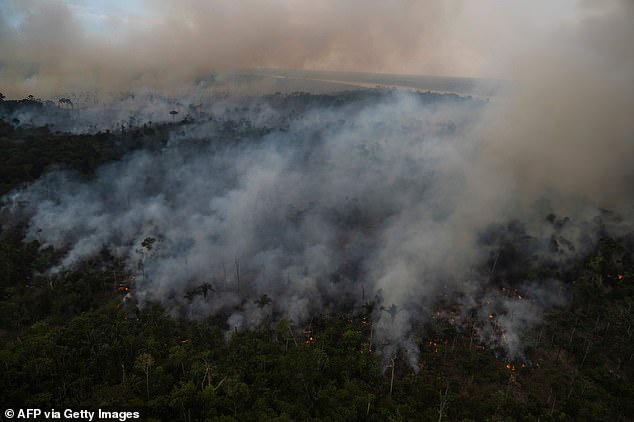 ‘Bolsonaro’s administration has been weakening government bodies responsible for monitoring the environment and enforcing laws to protect the forest,’ it said.

‘Brazil has what it takes to be a global leader in environmental protection, with an economy that is sustainable and doesn’t benefit just a few.

‘But for that, we cannot allow Bolsonaro to continue ruling the country.’

Bolsonaro’s term is coming to an end in 2022, although he will be up for reelection.

Commercial agriculture and timber plantations, and their resulting exports to countries such as the UK, are driving deforestation.

Recognising this, the UK government announced in December that it will amend the UK’s supply chains of products such as cocoa, beef, soy, coffee, maize and palm oil.

‘The deforestation law proposed by the UK government would barely make a dent on this issue,’ said Casson.

‘We need a zero-tolerance approach to Amazon destruction, or we’ll all pay the price.’

Britain’s obsession with timber, leather and beef ‘is having a heavy impact’ on the Amazon rainforest

Britain has an obsession with timber, leather and beef from Brazil, according to wildlife charities, who claim it is ‘having a heavy impact’ on rainforest wildfires.

Brazil, home to two-thirds of the Amazon rainforest, is one of the riskiest countries from which the UK imports key agricultural commodities, say the WWF and RSPB.

In a 2020 report the WWF say fires are being set deliberately to make room for agriculture to feed growing demand from places like the UK.

The latest figures suggest that 2,248 fire outbreaks were detected in the Amazon biome for the month of June – the highest number for 13 years.

Brazil represents 13.9 per cent of the UK overseas land footprint, according to a new report, equal to about 800,000 hectares or five times the area of Greater London.