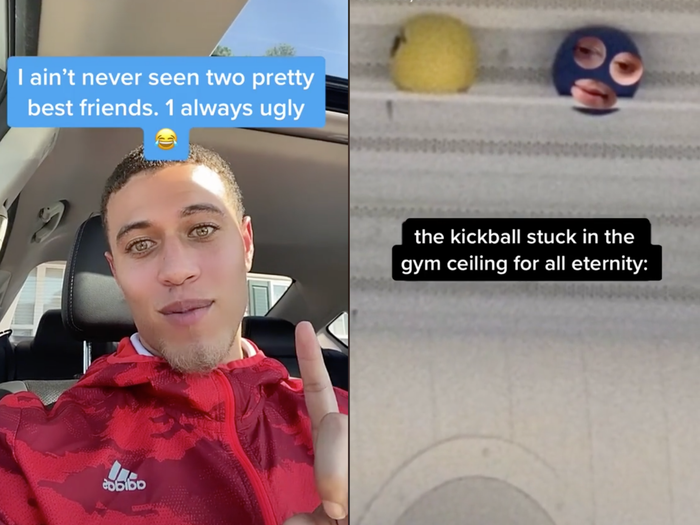 It was a wild year on TikTok, with a full whiplash of cultural trends, moments, and viral videos that'll leave your head spinning.

It's also home to some of the best memes on the internet, from spamming photos of Lin-Manuel Miranda's face to making jokes about how "two pretty best friends" don't exist.

Here are the top 10 memes, trends, hashtags, and challenges on TikTok in 2020, according to TikTok's Top 100 report released today.

Centered predominately around a medieval-esque cover of Shakira's seminal hit "Hips Don't Lie," #MedievalTikTok has approximately 10 million views to its name and saw creators pretending to be peasants and nobles alike.

Creators used the Time Warp Scan feature, which freezes an image in place as a blue line crosses the screen. This has allowed creators to make optical illusions, imagine themselves as Tim Burton characters, prove how smoothly they could wink, or even pretend to be angels. The possibilities are endless, and the #timewarpscan hashtag has over 14.3 billion views to date.

8. Curtis Roach's "Bored in the House"

You ever be bored at the house bored?🔥🔥 #checkthisout #bored #fyp #foryou#xycba #rap #viral

Curtis Roach's "bored in the house" sound is associated with approximately 4.5 million videos to date, and the hashtag #boredinthehouse has approximately 4.8 views. It's become a quarantine anthem.

The "I am lost" trend, which is based around the song "In This Shirt" by The Irrepressables, interpreted the lyrics of the song quite literally, focusing on lost objects or existential feelings alike. The hashtag #iamlost has approximately 4.1 billion views.

The format of #DontLeaveMe (the hashtag has 6.1 billion views) involved making typically physical puns, like the jokester running away, and their followers calling out "Don't leave me, don't leave me!" It's some of the best punny, physical humor on TikTok, and the hashtag #dontleavemechallenge has approximately 2 billion views as well.

This trend, popularized by @her.atlas' "random things in my Japanese home that just make sense" video series, allowed people to show off elements of their living space. The trend uses Zico's "Any Song," and the hashtag #RandomThings has approximately 6.4 billion views.

Reviving La Roux's classic early 2010s hit "Bulletproof," the hashtag #HurtMyFeelings has approximately 4 million views. Typically users jumping on the trend share past hardships that one may think would make them bulletproof.

why y’all never choose another equal to be y’all best friend?? I hate when the ugly one call the pretty 1 “twin” if ur best friend bad as u tag her rn

Jordan Scott, the 24-year-old creator of the "two pretty best friends" meme, told Insider that the claim was based on real life. After he posted the original video it became an instant classic bait-and-switch meme.

This challenge set to The Weeknd's chart-topping hit "Blinding Lights" brought families and other groups of people together in the name of dance. The hashtag #blindinglights has approximately 3.5 billion views.

##YouHaveTo stop calling me “daddy.” I ain’t ya daddy.

Set to a cover of Odezsa's "A Moment Apart" by @hannah_harpist, TikTokers parodied a monologue about how "you have to start romanticizing your life."