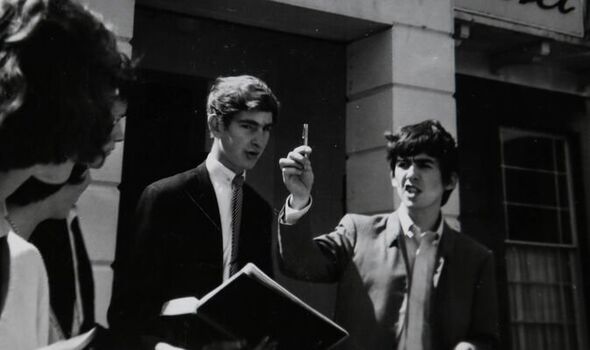 Young fan Sandra Woodruff, of Bristol, travelled to see the band in Weston-super-Mare, Somerset, where they played twice-nightly for six days in July 1963. She sneaked into the group’s rooms at The Royal Pier Hotel with her friends and took pictures of them. Sandra wrote up her visit later that year and her memo is included in the sale.

She said: “Fred [Marsden – of Gerry & The Pacemakers] had told us [the] Beatles’ bedroom number and about six of us went up. The room was open.

“No one was there, the wardrobe was open with a Bible on one of the two beds, a letter for George on the dressing table and record cover with John’s name on.

“I took big card label from one of a pile of Wolsey Cotton Rib X Briefs. We nearly got the police called on us!”

Andrew Stowe, from East Bristol Auctions, said: “Here we see The Beatles just weeks before they were to become the most famous band on the planet, happily chatting to fans, signing autographs and generally having fun.

“Seeing their young faces is really touching – nobody could have predicted how important those four young men would become! It’s a unique collection, and the underwear label in particular is one of the best pieces of Beatles memorabilia I have ever come across.”

Sandra’s collection will go under the gavel on May 27. It can be viewed at www.eastbristol.co.uk