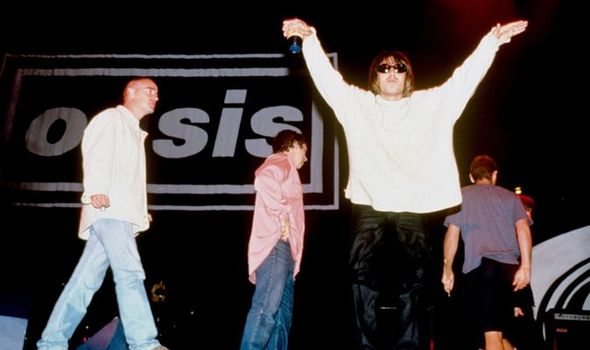 In August 1996, less than two years after they released their first album Definitely Maybe, more than a quarter of a million fans flocked to Knebworth Park to see Oasis perform over two sold-out nights. The Manchester band were at the height of their powers. They opened with Columbia, Liam’s buzzsaw vocals and cocky certainty firmly to the fore. On stage, Jagger and James Brown never stopped moving, but Gallagher never felt the need to bother.

He leaned forwards, arms behind his back, exuding a “Who are you looking at?” insolence. Brother Noel’s superb songs were all it took to keep the crowds hooked. Champagne Supernova, Don’t Look Back In Anger, Roll With It, Morning Glory… they’re all here, along with The Beatles’ I Am The Walrus performed with an orchestra.

This is the soundtrack of the new Oasis documentary of the same name. It comes in a 2 x CD+DVD pack or as a vinyl triple album. During Wonderwall – the first song from the 90s to gain more than a billion streams on Spotify – the DVD shows the warring brothers exchanging a glance that seems to convey amazement at their achievement.

The big omission is Rock ‘n’ Roll Star, written by Noel in 1994, before their stardom was set in stone. There’s no irony in his words, no ambition – just a statement of fact. They knew where they were headed.

Noel’s lyrics were unlikely to give Leonard Cohen sleepless nights but they made a real connection with their audience: “Maybe you’re the same as me, we see things they’ll never see, you and I are gonna live forever…” Yep, we all thought that once.