Russell Simmons is known for his entrepreneurial spirit, and his new business venture is another bold move.

Simmons created Phat Farm in 1992, a clothing line that became a major player in the “urban fashion movement” in the late 90s, according to The Hollywood Reporter. Hip-hop fans quickly caught on, launching Simmons into multimillionaire status. His ex-wife, Kimora Lee Simmons, then launched Baby Phat in 1998, further cementing the brands in the urban streetwear movement. Despite their success, both brands were reportedly sold in 2004 to Kellwood Apparel for $140 million.

However, Phat Farm seemed headed for troubled pastures. As detailed in a May 2005 New York Times report, Simmons was reportedly involved in a lawsuit concerning a business partner. Simmons discussed what it took to “develop an image for companies,” which included “[giving] out false statements to mislead the public so they will then increase in their mind the value of your company.” In other words; inflating sales numbers to the public to make the brand look better. “It took a lot of work for me to persuade buyers that there was a market for my brands, which we’ve made a success,” he said at the time.

Simmons has moved on since then (though his image has perhaps only gotten worse) and his new venture is truly something totally different. Keep reading for more details.

Russell Simmons is launching a line of NFTs 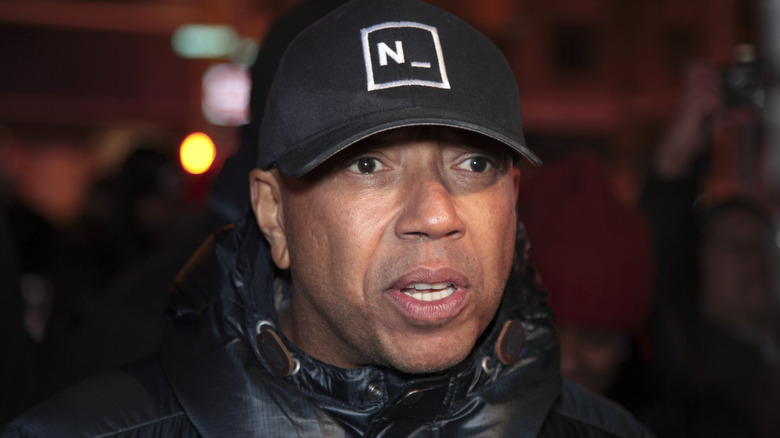 On August 13, the mogul will launch the line of NFTs, or “nonfungible tokens that use blockchain,” the technology behind cryptocurrency. The NFTs will be called “Masterminds of Hip-hop” and will showcase works from artists like Chuck D from Public Enemy, Doug E. Fresh, Big Daddy Kane, MC Lyte, Nikki D, DJ Hollywood, Busy Bee, and Grandmaster Caz, per the outlet. Simmons seemed thrilled about his new project as he said in a statement: “I often think of the early days of pre-recorded hip-hop when it was only a performance art. There were rappers and DJs who pioneered the space and made it so popular that the recording of rap artists was imminent.” He continued, “None of them has received the accolades that I believe they deserve and this is my chance to use a new vehicle to revisit and repay these amazing artists while they are still living.”

The NFTs will be available on the Tokau platform and even though well-known artists are involved, Simmons wants to lend a hand to “more obscure artists” who were around in the early days of hip-hop. “It’s his way of helping some of the rap pioneers who have been less fortunate than the new rap generation, who have made millions off the culture. This NFT collection will help the community,” a source told the outlet.