It was to become one of the biggest moments in British rock history as then future King Prince Charles became the first member of the royal family to attend a pop concert. 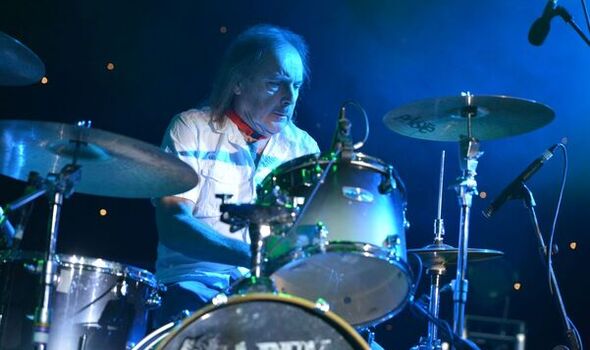 But as the nervous members of Status Quo lined-up dutifully to meet the expectant royal ahead of their 20th anniversary concert at Birmingham NEC, their long-serving drummer John Coghlan was sat brooding a few hundreds miles away at his remote Isle of Man home.

The 1982 concert was broadcast live on BBC One and made headlines around the world – but John did not even bother to switch-on the TV.

Instead as his chart-topping former bandmates were propelled towards even bigger superstardom by the future heir’s seal of approval, the self-confessed “huge Royalist” settled for going back to playing music in the pub with mates.

“At the end of the day a gigs a gig,” he now reflects matter-of–factly. “Yeah, it would have been nice to have played that show and met the future King, but I guess these things happen in life. You can’t dwell on it too much. It’s all ups and downs really. I’d have loved to meet Charles, and of course Di. I had lunch with Prince Edward a few years ago at a charity lunch in London and he was ever so nice, but that’s been my only brush with royalty.”

John can fondly recall enjoying street parties for the Coronation in 1953 and has marked each subsequent celebration of her reign in style. The monarch’s death has hit him hard.

“We were on holiday in the South of France when we got news she was ill. Of course you hope against hope that she would recover but when we learned she had died it was just devastating.

“We watched every bit of the funeral and it was such an occasion. Nobody does ceremonies like that as well as us, it made me very proud to be British”.

Having played for the Prince, John’s former Quo colleagues Francis Rossi and Rick Parfitt went on to perform at “The Last Tattoo” concert in Berlin in 1992 in front of The Queen to mark the departure of allied troops in 1992, and then in 2010 both were awarded OBE’s by the late monarch.

Regrets, he has got a few, but after a career jam-packed with those “ups and downs” the 76-year-old will bring to his hard rockin’ days to an end on Saturday night with a final concert at the venue where it all began for Status Quo – Butlins in Minehead.

And while a seaside resort in Somerset seems a far-cry from the heady days headlining Wembley and touring the world, the drummer affectionately nicknamed “The Mad Turk” due to his dark demeanour, believes it is a perfect way to “complete the circle” as a 16-date farewell tour for the John Coghlan’s Quo culminates with a headline slot at the Status Quo 2022 Fanclub Convention before 3,000 denim-clad headbangers.

Born in Dulwich, South London, he discovered drumming while accompanying his parents to live music nights at the Crystal Palace hotel. Having repeatedly tried to have a bash of the house kit, his father invested in a small kit on which John taught himself to play by jamming along to old jazz records.

His other interest outside school was the Air Cadets and he naturally joined the squadron band, from which inspired by The Beatles, he persuaded two pals to start up a fledgling beat group – The Cadets. 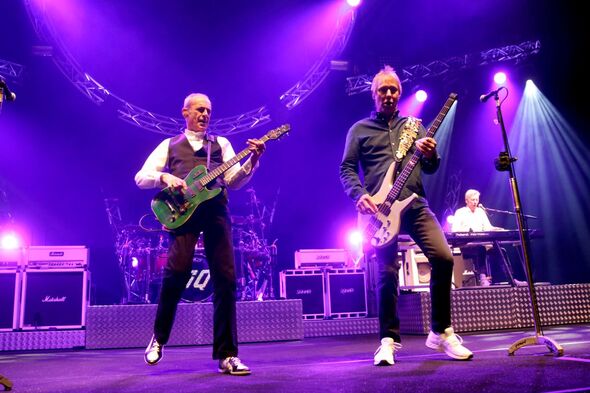 Fate dealt its hand during one garage rehearsal session when two passing fresh-faced schoolboys heard the racket and popped their heads inside to check out the band.

The 13-year-old duo were Francis Rossi and Alan Lancaster who had been enchanted by The Beatles and The Everley Brothers. Their band had a name – The Scorpions – but no drummer.

“They asked me to join and I thought, “why not”. It was the only offer I’d had,” recalls John.

Accompanied by keyboard player Jess Jaworski the quartet practiced incessantly and began gigging locally, travelling around South London with their equipment neatly packed between the lollies and choc ices of the Rossi’s family’s ice cream van.

Their big break came in 1965 when, having changed name to The Spectres, they were offered a prestigious six-week summer season at Butlins in Minehead. It was here they would meet a happy-go-lucky blonde-haired fellow teen by the name of Ricky Parfitt.

The guitarist, resplendent in gold lame suit, was plying his trade in a cabaret trio The Highlights but desperately wanted to join his new pals chasing dreams of chart success – and more importantly girls.

When The Spectres returned to London they changed their name to The Status Quo, and Parfitt was recruited as a second guitarist and vocalist. Their first hit, the psychedelic Pictures of Matchstick Men came in 1968, and stormed the charts on both sides of the Atlantic.

But although the lightweight “flower power” music brought instant stardom, it was a movement that sat uneasily with the band, who were increasingly finding themselves moving towards the London underground blues and rock scene that was spawning the likes of Fleetwood Mac, Deep Purple and The Small Faces.

“That psychedelic thing just wasn’t us. I had this awful jacket that was terrible, it’s life ended when it burst into flames when I stood too close to an electric fire at our old manager’s house. It was the best thing that ever happened to that jacket, it sought of summed us and flower power up.”

Amid falling sales and the prospect of a life working on a factory line, the band decided to “be true to themselves” and make a full out assault on becoming a rock ‘n’ roll band.

“The psychedelic thing just wasn’t what we were about,” laughs John. “We decided to lose the fancy outfits, grow our hair long and buy jeans and plimsolls and head out gigging the college circuit.” 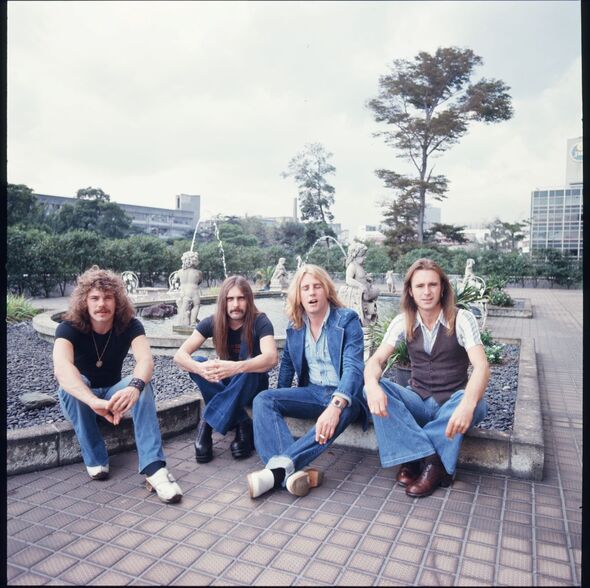 Having built up a huge live following 1972’s Piledriver album thundered into the top ten of the UK charts, kickstarting a phenomenal run of success that would ultimately make Quo the most successful UK chart band of all time. “I always tell people I played on all the big hits,” John jokes.

While Francis Rossi, 73, continues to tour the world as the last remaining original member of Quo’s famed “Frantic Four” line-up following Parfitt’s death from sepsis on Christmas Eve 2016 and Lancaster from MS last year, John remains philosophical about his sudden departure in 1982.

With the rest of the band succumbing to the temptation of drugs, with Rossi later revealing how he developed a £1,400 a week habit (£6,000 in today’s value), John sought solace in nothing stronger than pints of bitter – making him an outsider as things spiralled out of control.

“Drugs change people and they really mess you up,” he said. “But I just went off the rails, I couldn’t deal with it anymore. Everybody was concentrating on themselves rather than focusing on the band. I was fed-up with it all, I blew up.”

The band was recording their anniversary album 1+9+8+2 in Switzerland. During a meal out one night with record label bigwigs John decided he did not want to be there and walked out straight over the top of the table crashing his knee-length cowboy boots into stunned executives’ plates.

The next day he kicked over his kit in the studio, stormed out and caught a plane back to the Isle of Man much to the shock of wife Gillie. Within hours Quo had recruited a replacement in the form of ex-Original Mirrors drummer Peter Kircher and John’s life in one of the world’s biggest-selling rock bands was over. 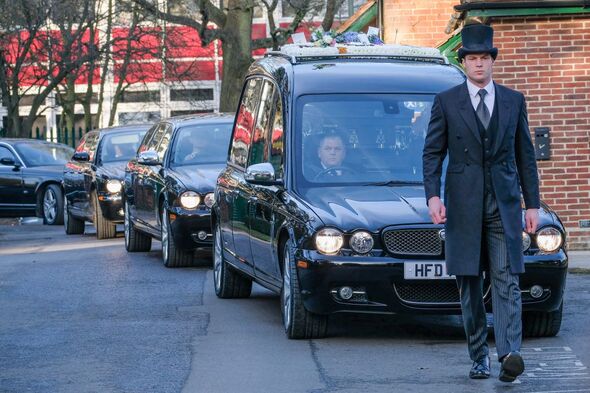 “Looking back the pressure was just too much. We should have taken six months off and let everything calm down,” he admits. “We didn’t talk much about depression and stuff in those days.”

A further blow came three years later when he failed to be asked to play Live Aid. Quo had split-up the previous year, playing what was billed as their farewell concert before 65,000 fans at Milton Keynes Bowl.

But after Bob Geldof coaxed them out of retirement it was Kircher who took the drum stool on July 13, 1985, as they kicked-off the greatest concert of all time with Rockin’ All Over The World.

“It was very disappointing. I watched some of it on TV,” John reveals. “Alan (Lancaster) had told me there would be a call, but it never came. Maybe it’s hard for certain people to pick-up the phone.”

After years of legal turmoil between Lancaster, Rossi and Parfitt, in 2013 the original Quo line-up reunited for two major tours – both selling out instantly and attracting fans from all over the world to see the “heavy version” of Quo back on stage.

But when in 2014 Rossi refused to contemplate recording a new album or touring a third time with his old pals, the bitter acrimony re-surfaced.

And while John admits Francis would be “more than welcome” to pop down to Somerset and join him for a couple of numbers on Saturday night, he has absolutely no hope of it happening. 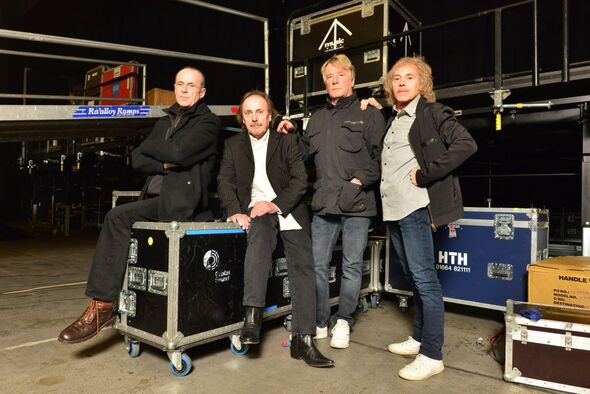 “We don’t really talk much anymore,” John admits. “He’s doing what he does and I do my thing. “Francis doesn’t talk to anybody really. He fell out with Alan at the end. You just move on and keep going.

“I’d ring him and invite him to come play but I know he’d just make an excuse. It would be nice for him to come and play a few numbers with my band, it would be a lovely way to end and the fans would absolutely love it. But personally I just don’t think he can be bothered. It’s a shame.

“I’m just looking forward to playing and having a few beers with fans after the show.”

As for the future John is planning to “whip out the brushes” and play some jazz shows, with some unique re-imagining of Quo hits. He also volunteers at Cotswold Wildlife Park, located close to his current Oxfordshire home.

“It’s going to be something different and I can’t wait. Jazz was my first love so it will be wonderful to give it a go. The first show has already sold out so hopefully fans will like it.”

But if they do not will he never perform those famous shuffle rhythms again?

“Not before Christmas,” he jokes. “I’m not retiring, that means putting your feet up and walking the dog. Well I haven’t got a dog so what else am I going to do. If the boys don’t want to play anymore then I’ll maybe get another band. This is our last concert…but never say never.”