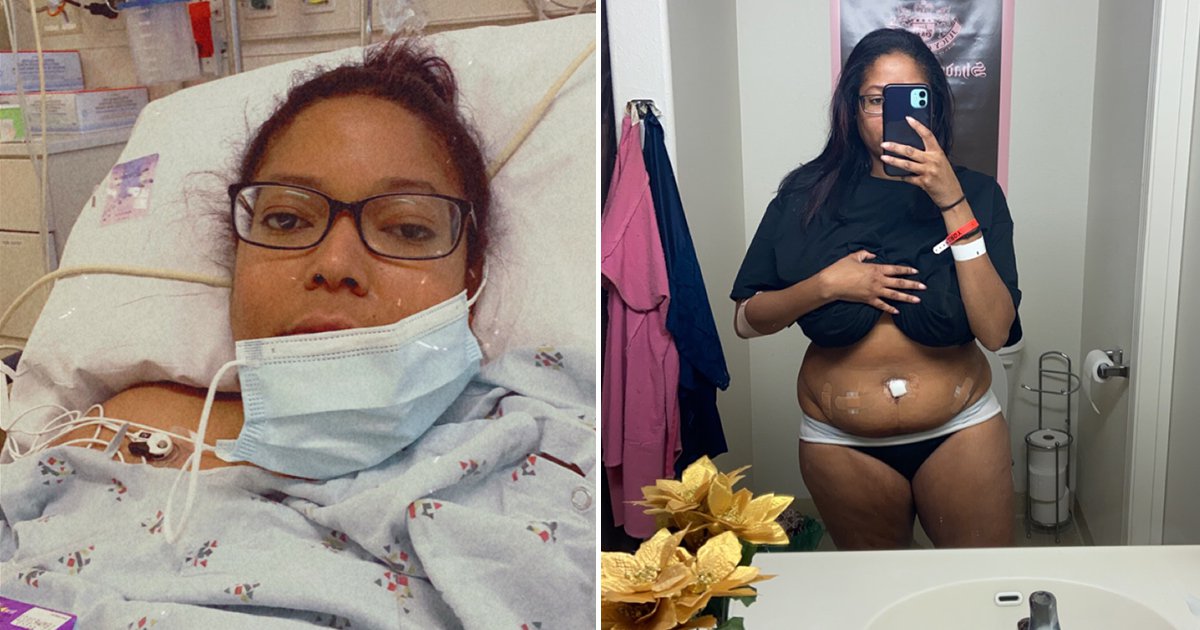 When she was finally taken into hospital, doctors found ‘grapefruit-sized’ cysts on her ovaries.

Now, Farren is trapped inside the ‘body of a pensioner’, and lives with constant chronic pain.

This is all due to endometriosis, which went undiagnosed for years and spread to four organs in Farren’s body.

At first, Farren, from California, US, had pain so intense that she claims she was forced out of her job.

‘My body feels like it’s trapped inside an elderly woman,’ the hospital monitor technician, said.

‘The pain put me out of job as a hospital technician in December 2020 for over a year.

‘I couldn’t pay my rent, afford my car, daily necessitates, or even food – not to mention the cost of surgeries and medications that kept piling up in debt.

‘I suffer from pain pretty much every day.

‘It also affects my relationships with people in my life, because it’s hard to socialise.

‘Sometimes I suffer constant nausea and am so fatigued I barely want to go out.

‘I suffer from constant nausea and fatigue as well as physical pain – pelvic, hips, knees.’

In March 2022, Farren was able to return to work but only part-time and without government funding. She was forced to rely on a small amount of financial support from her parents.

Before her diagnosis, she was baffled by the mystery illness and thought it was simply a result of painful periods.

She said: ‘I remember feeling my insides feeling like they were being ripped apart in my early and teen years, even as an adult.’

She claims doctors dismissed her symptoms for years and instead diagnosed her with a UTI and constipation.

But she knew in her gut that there was something much more sinister at play.

‘One day, I felt intense pain and ended up calling my dad because I didn’t feel well,’ recalled Farren.

‘When he found me, I was collapsed on the floor, gasping for air.

‘The paramedics came and I was rushed to the hospital to find out that I had two cysts the size of grapefruits on my right ovary.

‘They admitted me to observe me and I was told, by my gynaecologist at the time, that if I didn’t feel better by morning that surgery would be the best option.

‘She removed the cysts and during my follow-up appointment I found out I was diagnosed with endometriosis.’

After getting the life-changing diagnosis, the then-26-year-old received a treatment drug Lupron that forced her body into menopause.

She added: ‘I had laparoscopic surgery to get my diagnosis for endometriosis.

‘Afterwards I was put on medication and had a terrible experience, the side effects were horrendous such as insomnia, hot flashes, mood swings, bone pain, and memory loss.

‘The drugs put you into a medically-induced menopause – it was absolutely horrible.’

What happens next for Farren isn’t clear. She fears that encometriosis will prevent her from having children.

‘I am told I am able to conceive with one tube and ovary but endometriosis can grow there and block my tube,’ she explained.

Farren wants to share her story to support others struggling with endometriosis, and to encourage them to fight for a diagnosis even if doctors don’t take symptoms seriously.

‘I felt alone, confused, angry, upset,’ she said. ‘I really wanted to speak up but I felt ashamed of my diagnosis.’

‘The disease can be lonely – people will make you feel ashamed or “crazy” for having the feelings that you do when dealing with it.

‘Endometriosis is a whole-body disease. You’re in pain and your feelings are valid.

‘I hope that sharing my story will help many other people either get diagnosed or feel less alone because this disease is very isolating.’