The short film was the brainchild of a pre-Grammys, pre-Emmys, pre-Golden Globes Donald Glover — and a clear sign of the ambition that would net him those trophies in the near future. Hiro Murai, the visual architect of Glover’s Atlanta and other film projects, directed it. Royalty, a collective of Glover’s colleagues, were responsible for the story. A surreal, existential meander through a mansion, the 20-minute movie — at the time an odd, bold piece of internet culture — now looks like the blueprint for much of Glover’s later output. It was the first iteration of an approach to filmmaking that would, six years later, culminate in this weekend’s Guava Island, the hour-long, Rihanna-starring film released on Amazon following Glover’s Friday night headlining slot at Coachella.

“[Clapping for the Wrong Reasons] became the prelude for Atlanta but also, when we did that, it was a thing we just put out,” says Jamal “Swank” Olori, a producer and screenwriter and member of Glover’s Royalty collective. “Nobody was credited for anything. We didn’t know if it was going to do anything. It was back in the mixtape days, so we just wanted to drop.”

“We didn’t handle it in a mature way, in terms of the way we developed it,” Swank continues. “So we talked for years about we’re going to do that again, and having the same kind of energy and bringing the same things we brought to it. This one, we want to all fully be able to own after we’ve finished it.” 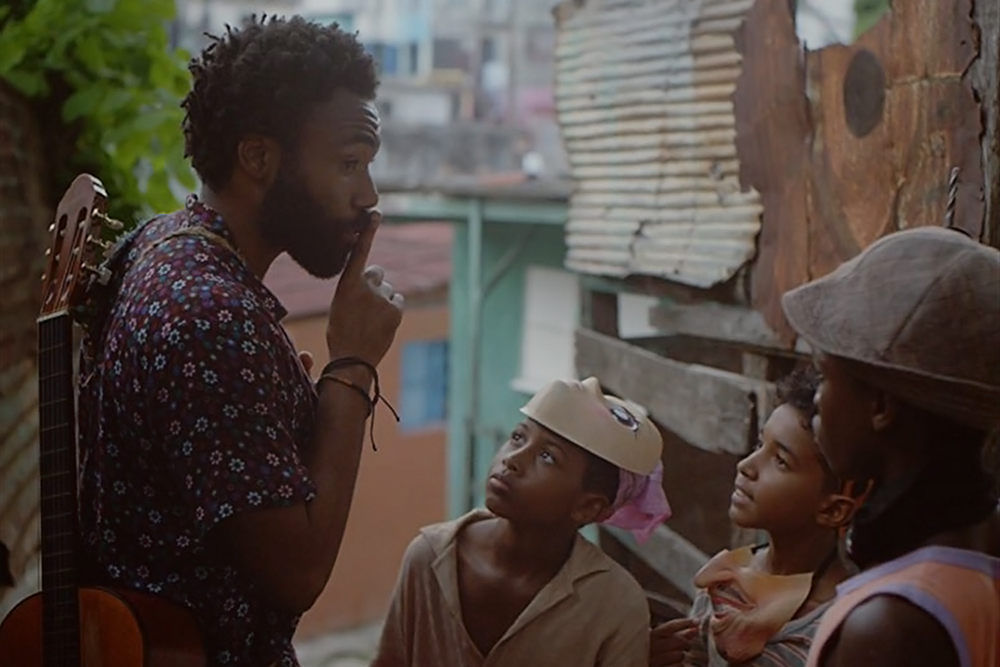 On Guava Island, the credits are clear. Donald, Stephen Glover, Fam Udeorji, Ibra Ake and Swank all have prominent roles on the film, which premiered at Coachella on Thursday and is currently streaming on Amazon. The 54-minute film follows Deni Maroon (Glover) and Kofi Novia (Rihanna) on a quest to throw a festival for the inhabitants of a fictional island under the rule of the despotic Red Cargo (Nonso Anozie). Its genesis began in Hawaii. Donald was recording new music, and had a loose concept for a film that the members of the collective began to shape.

“We just bounced some ideas based off a first idea that Donald had for a movie that kind of felt like City of God in this tropical setting,” Stephen Glover, the writer of Guava Island, a high profile writer on Atlanta, and Donald’s brother, explains. “We talked about it and went over the story that could tie into black royalty. Something that felt like all these cool, black genres that are interesting to us.”

Stephen based the character of Deni on his brother, striving to make an inspirational “every person.” At the time, he didn’t know who would play Kofi.

“I didn’t know that I was writing for Rihanna,” he says. “We had some people in mind that we wanted to do it. Fortunately, we were able to get Rihanna. So it was good. There some things that were tweaked afterwards, but for the most part, it wasn’t written specifically.”

After Stephen finished the script, Ibra (Royalty’s creative director) and Hiro went scouting for locations in Cuba. Ibra describes the country as “overwhelming.” At times the cast and crew were “disconnected from the world,” unable to send emails from outside the hotel or use their phones.

“We were tackling this intense project… It’s just a lot of logistical things. I didn’t realize how intimate it would be,” Ibra says.

At the beginning of the film, three children try to rob Deni. They, particularly, were close to Swank’s heart. He had lived in Nigeria and, when starting the process for Guava Island, was determined to show the complexity of their lives.

“Everybody there is in survival mode, and it’s like that in a lot of third world countries. You don’t have time to actually think about what you want to be, [or do] something different. You’re thinking about surviving, or thinking about making money, and it starts at a very young age — that shapes a city or an environment.”

The driving force at the center of the narrative is America. It’s a loaded symbol, one that represents sacrifice that comes with chasing altruistic dreams. Before Glover performs a pared-down version of his Number One hit “This Is America” in the film, he explains to an impoverished co-worker why their dream of moving to the U.S. is hollow.

“America is a concept,” Deni says. “Anywhere where, in order to get rich, you have to make someone else richer, is America.”

This conception of America, as a broken, cruel system that breaks as often as it makes, is something the Royalty crew is increasingly interested in exploring. Hours before his brother’s performance, Stephen articulates why that theme has become the guiding force for the group’s recent work.

Death looms over the film, something Glover brought to his Childish Gambino set on Friday night at Coachella. During the show, he brought the performance to a standstill for a quiet monologue about mortality. “I lost my dad this year, we lost Nipsey, we lost Mac,” Gambino said to the crowd. “What I’m starting to realize is all we really have is memories, at the end of the day.”

Fam, half of the management company Wolf + Rothstein, one of the instrumental people guiding Glover’s career and Royalty member, is serene. In his approach to the film, viewers’ consumption of the movie is far more important than its critical reception.

“Even if people hate it, people love it, we made a film that, most of the time, people would immediately want to make money off,” Fam says. Though the crew likely saw a hefty payday for the film — it was sold to Amazon after sending the company a four-and-a-half minute sizzle reel, according to Vanity Fair — they also made sure to build a free-to-view window into the film’s distribution plan. “We thought it was very important to at least build a window to have people see it for free. That it didn’t just go up on Netflix. That it didn’t just straight up go on Amazon or whatever that looks like. That people had a moment to see it for free. Our biggest thing is offering enough openness for people to discern how they feel about something. We speak less, and try to do a little bit more.”