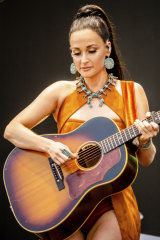 Kacey Musgraves has had a very big year, winning four Grammys including album of the year and owning red carpets from the Oscars to the recent Met Gala. A bona fide country music star for more than a decade, the Texan's 2018 album Golden Hour was a crossover hit of such unrelenting loveliness that it pushed her into Taylor Swift territory.

The sold-out crowd at the Palais proved just how intoxicating her music and wide her reach: young superfans wearing head-to-toe merchandise sang every word to her smart, sweet tunes alongside semi-retired suburban parents and hipsters in shearling jackets.

Just like the latest album, the 30-year-old set the tone with an electric opener, Slow Burn, and the entire theatre was on its feet. Wearing a denim onesie and backed by an all-male, six-piece band in matching suits, Musgraves' voice had a cut-glass clarity that never faltered throughout the delightful 19-song set.

The tempo rocketed through the pop-tinged melodies of Wonder Woman to Lonely Weekend to Butterflies – the first song Musgraves wrote when she met her husband – interspersed with relaxed, cheeky stage banter.

At her Sydney show, the singer refused a request from a fan to do "a shoey" (skoling booze from a shoe) which caused a minor stir on social media, so towards the end of her Melbourne performance Musgraves produced an elegant glass slipper and a bottle of gin, and knocked back a shot.

"Basically, you're welcome," she said with a twinkle.

After some choice highlights of older songs such as Merry Go Round, Family is Family and It Is What It Is, Musgraves barnstormed home with LGBTQI+ anthems Rainbow and Follow Your Arrow, and closed with an absolute belter, High Horse, in a colourful hail of flags, capes, lights and rapturous applause.

This was her first time in Melbourne but you suspect Musgraves will be back – next time in a much bigger venue.