Ariana Grande is taking time to reflect on the deadly bombing that occurred during one of her concerts four years ago in Manchester, England. On May 22, 2017, a bomber killed 22 people and injured more than 500. Ariana is making sure to remember the victims who were tragically killed.

“Although grief is ever-present and our relationship to it is constantly evolving and expressing itself in different ways every day, year round…. I know that this anniversary will never be an easy one,” she wrote in an Instagram Story. “Please know that I am thinking of you today.” 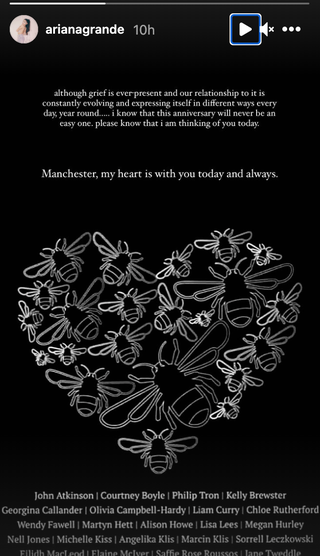 The terrorist attack was carried out by a lone suicide bomber. “The attacker, I can confirm, died at the arena,” Chief Constable Ian Hopkins said following the attack. “We believe the attacker was carrying an improvised explosive device, which he detonated, causing this atrocity.”

Ariana spoke to Vogue U.K. in 2018 about how she was severely impacted by the traumatic experience. “It’s hard to talk about because so many people have suffered such severe, tremendous loss,” she explained. “But, yeah, it’s a real thing. I know those families and my fans, and everyone there experienced a tremendous amount of it as well. Time is the biggest thing. I feel like I shouldn’t even be talking about my own experience—like I shouldn’t even say anything.”

She continued, “I don’t think I’ll ever know how to talk about it and not cry.”

Our hearts go out to Ari and to the families who lost their loved ones.