Africa’s answer to Made in Chelsea! Netflix’s Young, Famous & African shares the VERY glitzy lives of Johannesburg’s glamorous residents – from a ‘sugar baby turned cougar’ to a playboy with ‘four or five kids’

There have been the Real Housewives, Made In Chelsea and Bling Empire.

Now Netflix viewers are going to be introduced to a new generation of young, influential people with jaw-dropping wealth in Young, Famous & African.

The series, which premiered on the streaming service last week, follows a group of of affluent media personalities from South Africa, Nigeria and Tanzania, who have come together to live the high life in Johannesburg.

They travel on private jets, step out in head-to-toe designer gear and walk into a room dripping in custom diamond jewellery – and they’re not afraid of showing off their lavish lifestyles on Instagram.

Among them is social media star Khanyi Mbau, a self-described ‘sugar baby turned cougar’ who ‘attracts bad boys’, and playboy rapper Diamond Platnumz, who has 14million followers on Instagram and admits he doesn’t know how many children he has fathered.

There is also DJ Naked, who is dating a woman 12 years his junior, and super stylist Swanky Jerry whose best friend is married to a serial cheat.

Here, FEMAIL reveals some of the key figures you need to know before you delve into your next guilty pleasure… 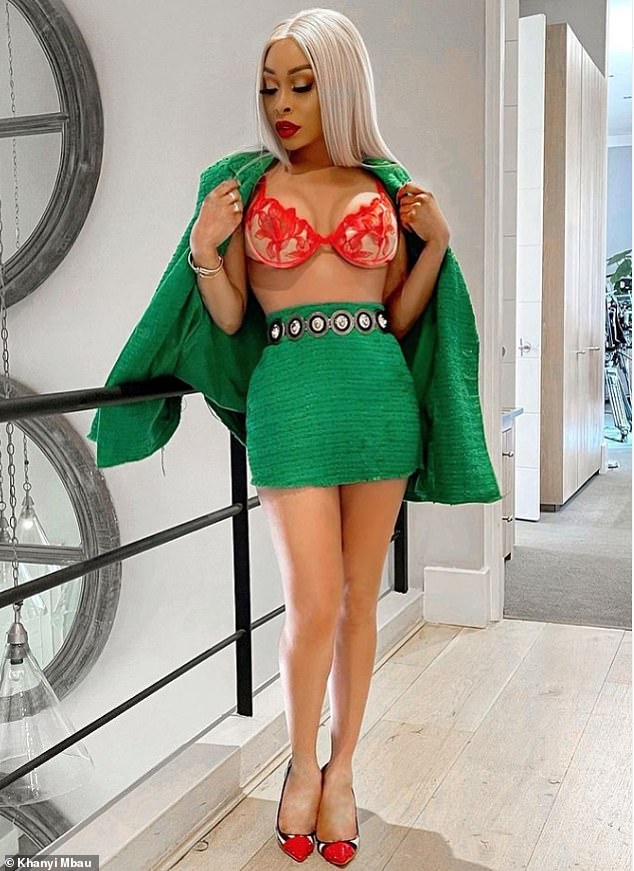 Cougar: Actress Khanyi Mbau, 36, is a self-confessed sugar-baby-turned-cougar with a taste for bad boys. Her Instagram is full of scantily-clad shots like the one above 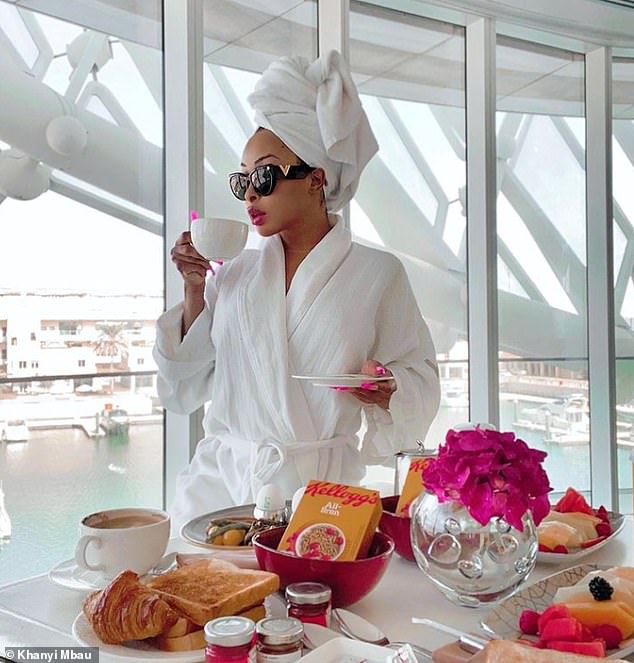 Jet-set: The TV star tucks into breakfast at the breathtaking five-star W Hotel in Abu Dhabi 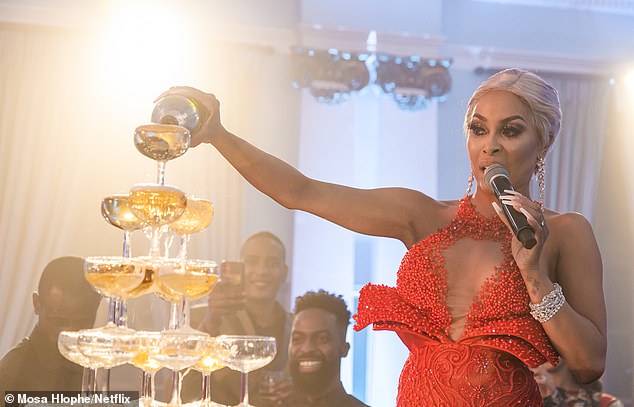 Party queen: In the first episode, Khanyi hosts a black tie ball with a Champagne fountain

Actress Khanyi Mbau, 36, is a self-confessed sugar-baby-turned-cougar with a taste for bad boys.

Raised in Soweto, Mbau became a household name after landing a role in a popular soap opera and went on to star in TV series, compete in Strictly Come Dancing, and host a string of TV programmes.

She has a baby with her ex, self-made businessman Mandla Mthembu, who has reportedly fallen into financial difficulty and lost much of his fortune.

‘I earned the name gold digger when I had a baby with my baby daddy who was 31 years older than me,’ Khanyi explains on the show. ‘I thought I would be a sugar baby all my life but now I’m a cougar. I’m dating a 28 year old and I’m 35. 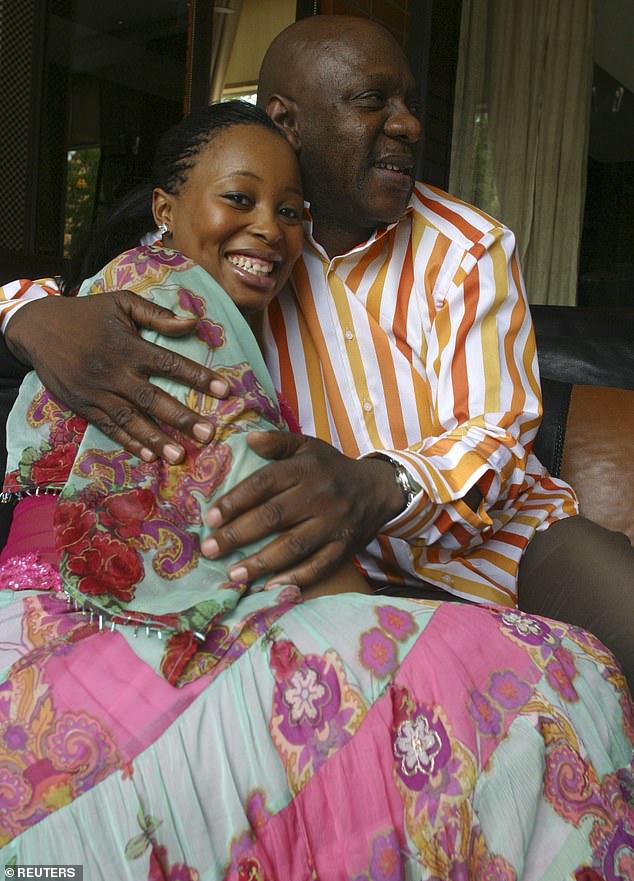 ‘Baby daddy’: Khanyi shares a daughter with her ex-husband Mandla Mthembu, who is 31 years her senior 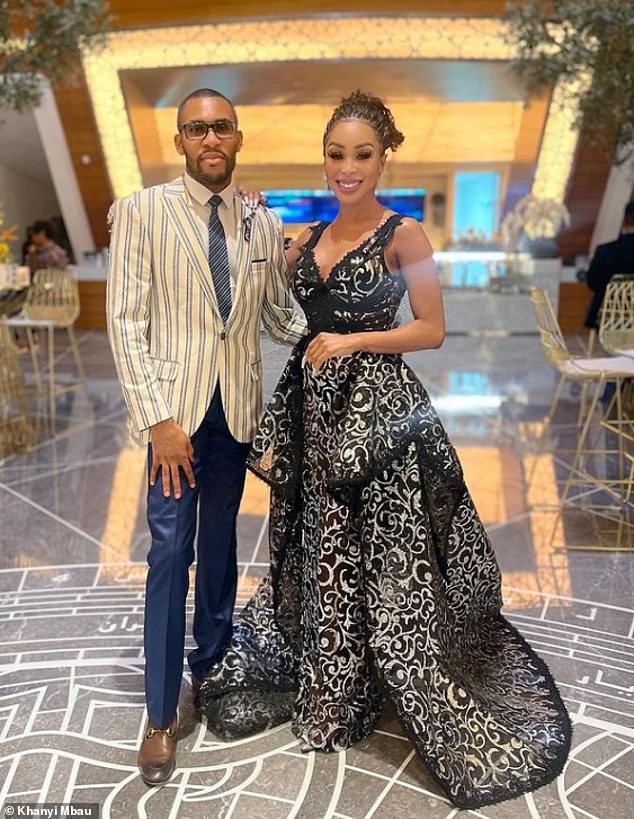 Toyboy: She is now dating 28-year-old ‘bad boy’ Kudzi, pictured, who also appears on the show 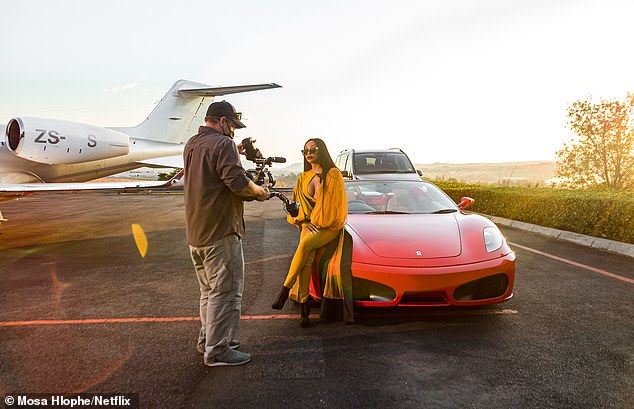 ‘Men are like the police, they protect and serve. Protect me from taking out my card and paying for my sneakers. Serve me by bringing back that paper bag that you paid for. Mr K [her boyfriend] runs the station. The sheriff.

‘Kudzi ‘Is Kudzi a bad boy? Yes. He’s got a crazy life, “allegedly” stole money. I don’t know why I seem to attract them, my baby daddy also had a scandal around how he got his money. Maybe I’m a gangster chick. So if he is one? I don’t care.’

Khanyi’s nickname is the ‘queen of bling’ and she quickly marks herself out as a woman to watch on the series.

The social media star is thought to have built much of her fame and fortune on her own, although having two wealthy ‘bad boy’ exes certainly doesn’t hurt. 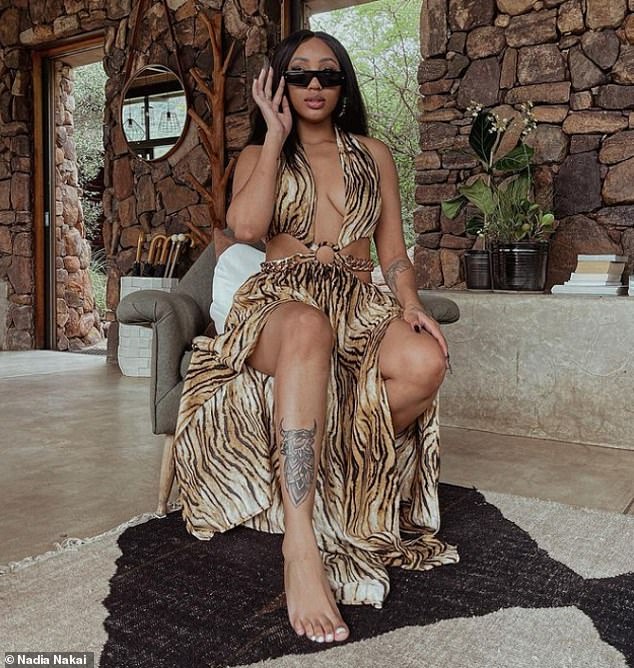 Music star: Nadia Nakai is a first generation South African rapper with Zimbabwean heritage who is making waves in the music scene 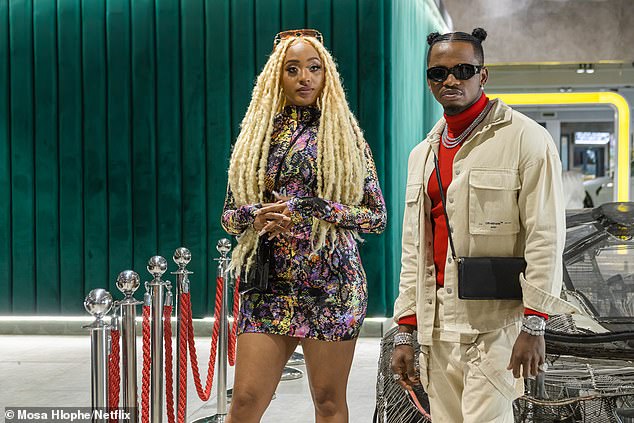 Romance on the cards?  At the start of the series she is in a long-distance relationship with an American rapper and lyricist, but quickly catches the eye of fellow cast member Diamond Platnumz (pictured)

Nadia Nakai is a first generation South African rapper with Zimbabwean heritage who is making waves in the music scene.

The 31-year-old has 2.5million followers on Instagram, where she shares photos of her magazine shoots, music videos and sun-soaked getaways.

At the start of the series she is in a long-distance relationship with an American rapper and lyricist, but quickly catches the eye of fellow cast member Diamond Platnumz. 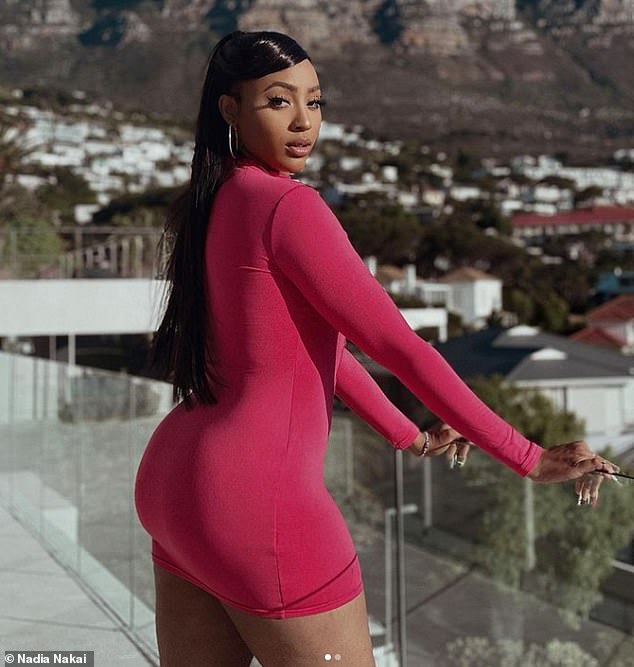 Superstar: The 31-year-old has 2.5million followers on Instagram, where she shares photos of her magazine shoots, music videos and sun-soaked getaways

Nakai graduated with a degree in marketing, communication, and media studies at the internationally renowned Monash University in South Africa, but found her big break via a TV talent competition.

The multi award-winner released her debut single in 2013 and has a string of successes in the almost 10 year since. Nakai is also a regular fixture on South African TV and has hosted a number of reality TV shows.

Now it is her turn to step in front of the camera and is promising plenty of gossip and scandal.

‘I am in a relationship but it is long-distance, it is tough,’ she says in the first episode. ‘Even though I’m committed to that relationship, I feel like a part of me is also trying to see if that [a relationship with Diamond Platnumz] would be a better option.’

THE SUPERSTYLIST AND THE MUSICIAN’S WIFE 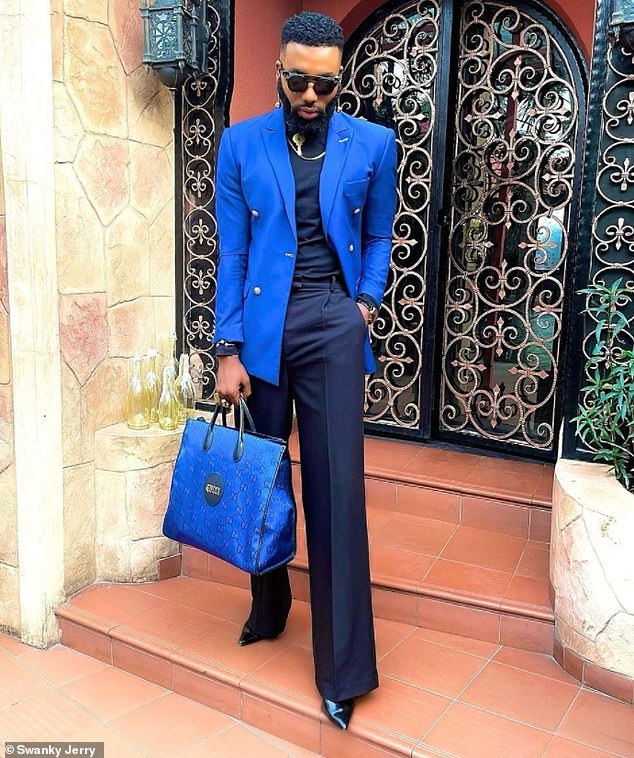 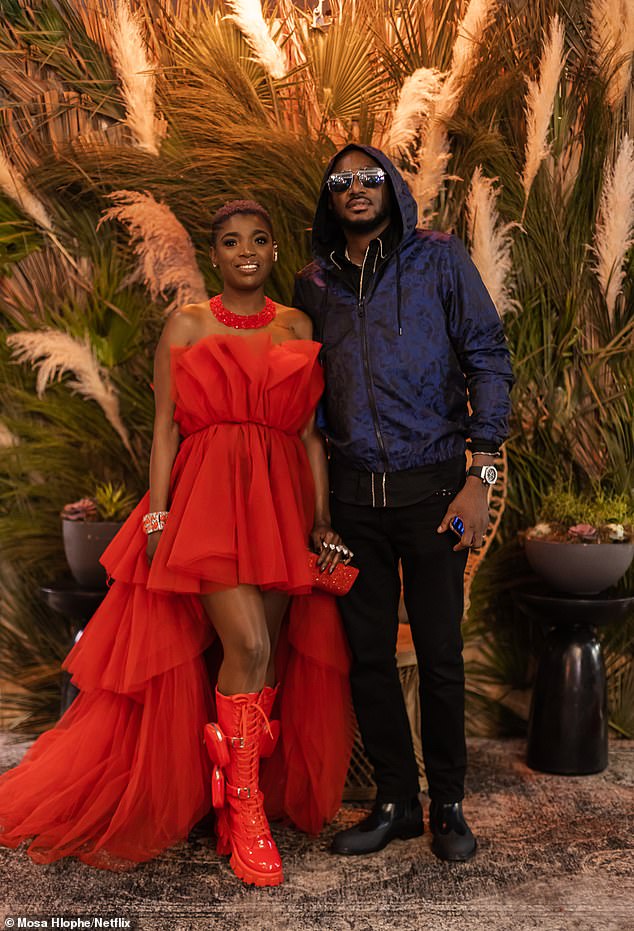 Stepping into the spotlight: Annie, pictured, wants to enjoy fame of her own after spending years in her husband’s shadow. The actress has appeared in 200 films

Annie married Innocence, her ‘first love and first kiss’, in 2012, but the road for the couple has been far from smooth.

During the first episode of the series, Annie reveals Innocence has fathered four children with other women. Their daughter was ‘his fifth and her first’.

Now she says she is ready to step out of his shadow and into the spotlight.

‘Innocent has been big for so many years. He kind of overshadows everything that you do. You have to do ten times as much for people to see what you do. 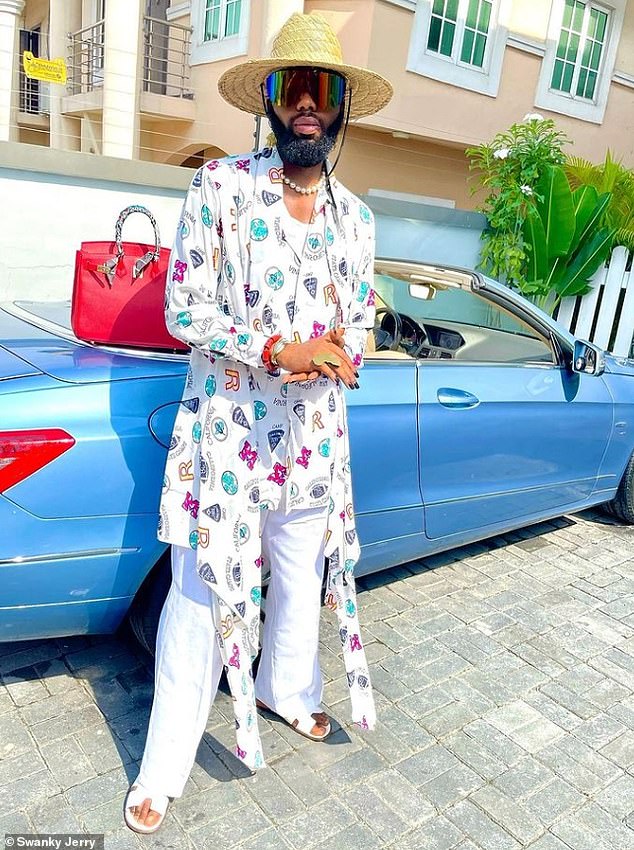 Moving on up: Swanky’s social media profile is dotted with photos of him staying at 5-star hotels, attending red carpet events and criss-crossing the world on first class flights 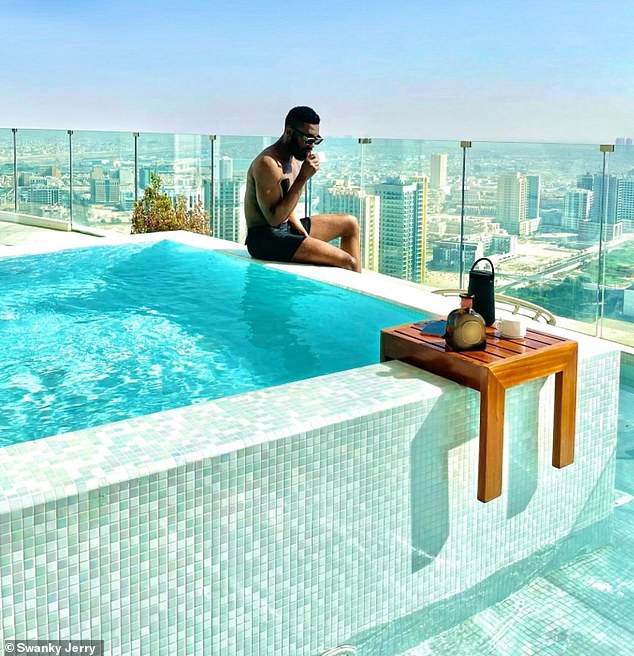 Cash to burn: Swanky’s snaps make it seem as though he has as much money to spend as his clients. Pictured, the stylist soaking up the sun by the pool

‘I’ve acted in over 200 movies, I’ve been in over 50, 60 TV series. There is so much to this woman and you call her 2Face’s wife. My name is Annie Macaulay. And you will know about me.

‘I’m in South Africa to expand my empire. Over the past few years, I’ve sacrificed a lot of my career and my business for my children and my family… and it is my time.’

Despite the difficulties in her marriage, Annie says the good times far outweigh the bad. She keeps a low profile on Instagram – but it’s a different story for ‘Swanky’.

His social media profile is dotted with photos of him staying at 5-star hotels, attending red carpet events and criss-crossing the world on first class flights… with a seat reserved for his designer handbag.

Swanky’s snaps make it seem as though he has as much money to spend as his clients. 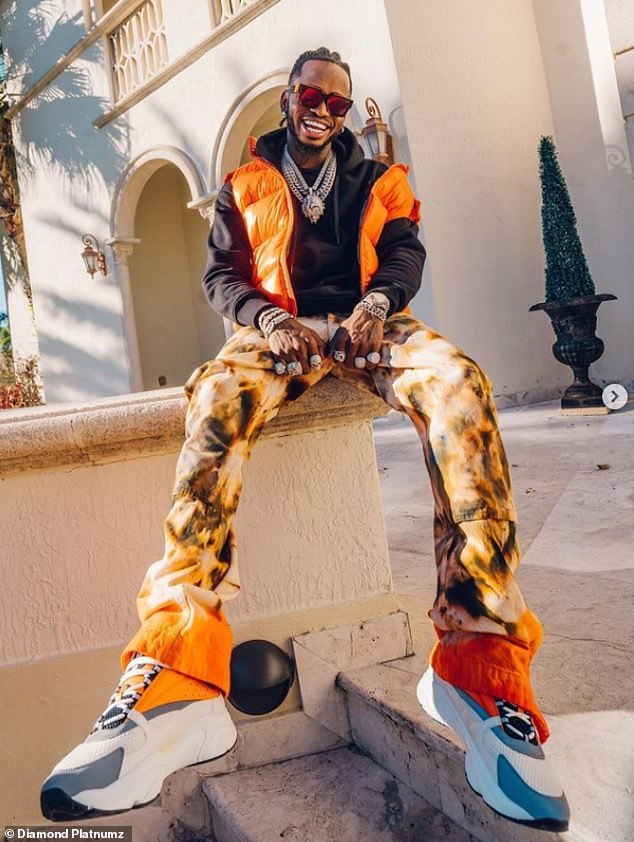 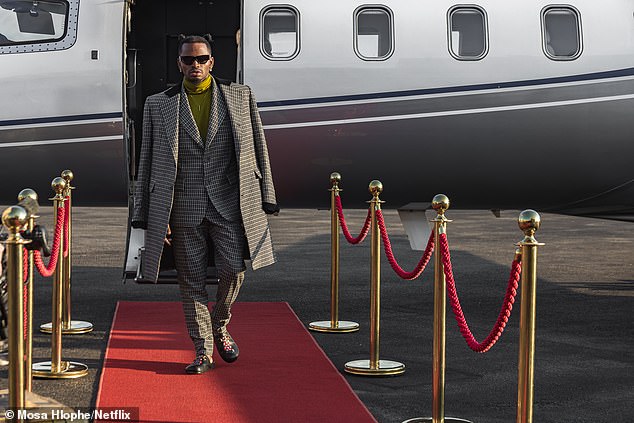 Making an entrance: Diamond Platnumz touches down in Johannesburg in a private jet 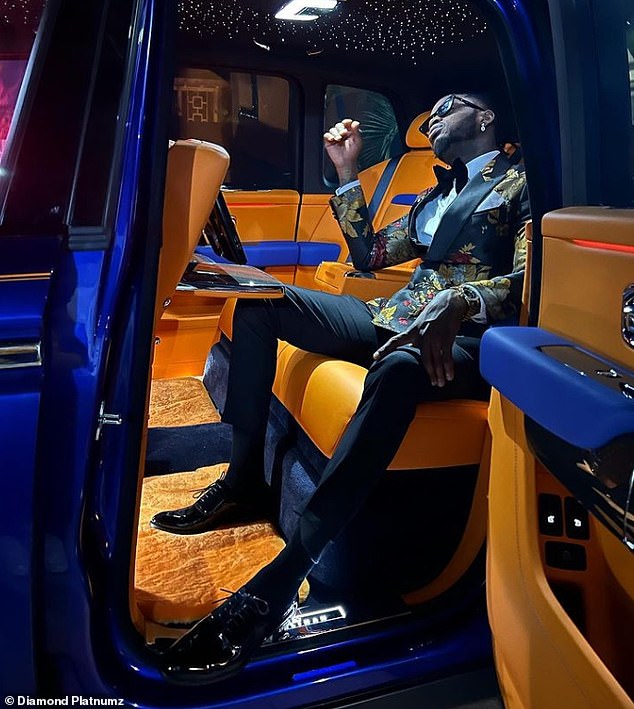 Living the high life: The 31-year-old has an estimated net worth of $7million, making him one of his home country’s richest entertainers

An all-out megastar, Diamond Platnumz, real-name Nasibu Abdul Juma Issack, is a Tanzanian musician and businessman whose bulging bank balance stands out even among his well-heeled castmates.

The 31-year-old has an estimated net worth of $7million, making him one of his home country’s richest entertainers.

Diamond arrives in Johannesburg in a private jet and, as his name suggests, isn’t afraid of a bit of bling.

His Instagram is full of snaps showing his impressive diamond-encrusted jewellery collection, including several rings the size of small ice skating rinks.

The singer shares two children with his ex, Ugandan-born socialite and businesswoman Zari Hassan, who live in South Africa.

He has two further children – but explains during the show that he’s recently discovered he might be the father of two more.

‘I’m single,’ he says. ‘There’s no way I can just be me for the whole year. Sometimes you do one-night stand things. It’s complicated.’

At the lavish ball in the first episode, Diamond sets his sights on Nadia, saying he wants ‘to see if he can take a bite’. 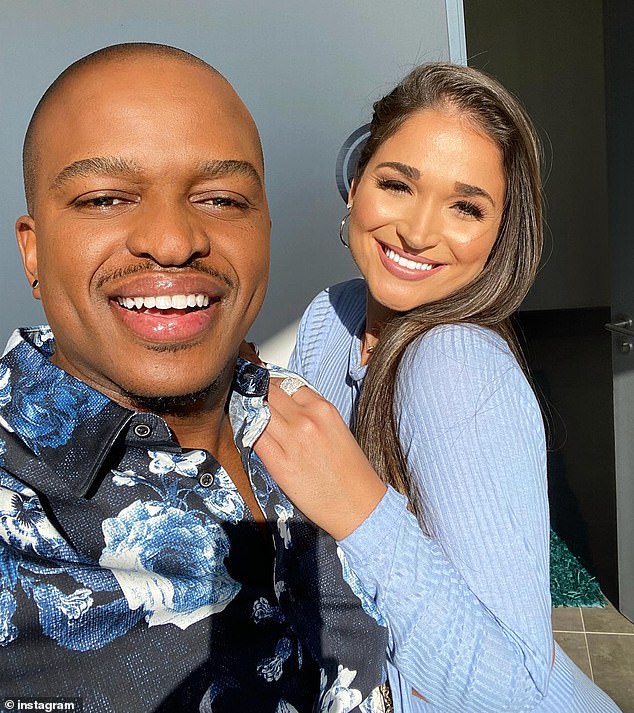 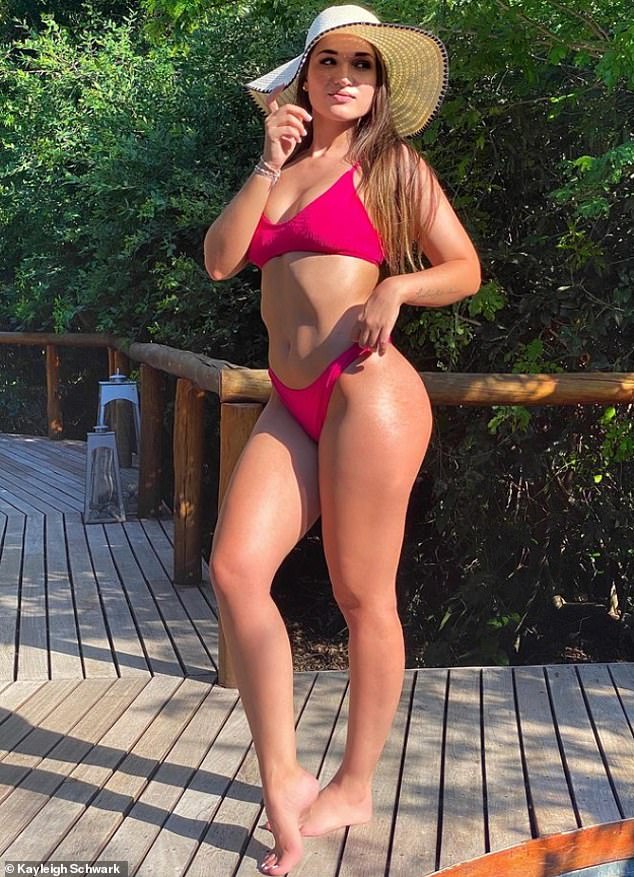 Striking a pose: Kayleigh says she was initially worried about her age gap relationship but now enjoys dating an older man 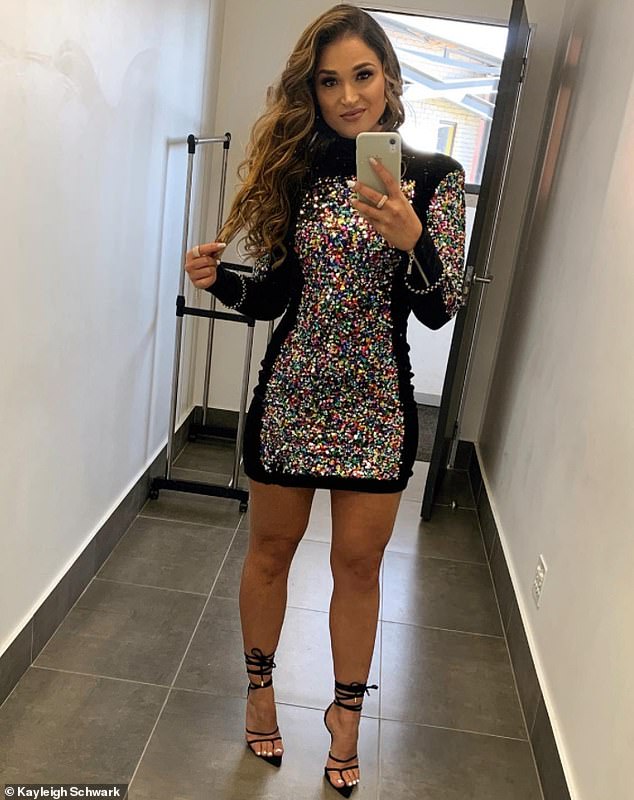 On the rocks? But the footballer (pictured) admits she wishes Quinton put more effort into their relationship

Quinton has a son and was previously married to model Naledi Willers, a star of the Real Housewives of Johannesburg who lost her battle with breast cancer in 2021.

Speaking at the start of the show, Quinton describes himself as ‘Kayleigh’s daddy’, while his girlfriend says: ‘Quinton’s 40 years old. I’m 28 years old. It’s the biggest gap I’ve had in any relationship. I’m definitely a fitness enthusiast. I play semi-professional football.’

It appears the couple’s wealth comes largely from Masina, although their lifestyle looks less flashy than some of the others’.

However there is trouble in paradise: Quinton says they’re in a ‘rocky’ patch and Kayleigh admits she wishes her boyfriend was more romantic.

‘I wish I was dating the Quinton I met,’ Kayleigh says. ‘He used to cut up the cheese in little hearts.’