While waving his shield metaphor over cost-of-living pressures, Scott Morrison road-tested another method of defence against the media that doubled as an attack.

“You get to ask the questions, not say what the answer is,” the Prime Minister responded to a press pack peppering him about his fate should Australia put a pack of so-called teal independents in the balance of power. 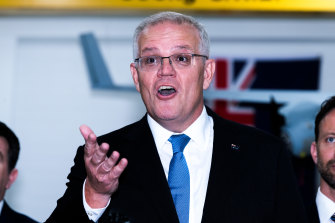 Scott Morrison said he could answer questions how he liked.Credit:James Brickwood

In his masterful obfuscation, Morrison side-stepped actually providing an answer to the press in Perth on Friday morning, while simultaneously shaping up against his opponent, who stood in the relative safety of his inner-western Sydney seat of Grayndler, thousands of kilometres away.

The sledge against Anthony Albanese – who this week stumbled again in the face of the media’s persistent memory tests, and its perceived savagery from quarters of the community – was to remind Australians they had a choice to make about who was in control.

“When you’re prime minister, you don’t get an easy day in the office. Every single day is hard,” Morrison said staring down the lens of a camera in a West Australian drone-making facility. “If Anthony Albanese thinks the campaign is hard, I’ve got news for him – government’s a lot harder.”

He had ground to regain after being drowned out by a frustrated group of journalists in a western Sydney sweetshop the day before, after refusing to answer whether he would be campaigning in the seat of Wentworth, a question he ducked artfully throughout the week.

“My mum lives in Wentworth,” he’d said wryly to queries to weed out whether he will be showing his face alongside Liberal moderate Dave Sharma, defending a paper-thin margin against independent Allegra Spender.

The question dogged Morrison throughout the week after the Coalition’s broad church showed signs of being stretched too thin over climate action, a tension point manifesting in the Prime Minister’s absence so far in certain under-threat metropolitan seats.

During the fourth week of the campaign Morrison visited Parramatta twice, then Corangamite, Dunkley, Chisholm, Boothby, then back to Parramatta, before jetting far west to the electorates of Cowan, Swan and Christian Porter’s relinquished seat of Pearce.

There was no high-vis on the trail, instead the Prime Minister filled his itinerary with speaking to young adults about mental health, attending an Eid celebration, posing in a fruit shop, visiting two seniors’ villages, a smattering of cafes and a vineyard.

He also tried his hand at three different football codes, including with a rugby league club in his own electorate of Cook, and held his own during a billiards game with some retirement village residents on Victoria’s surf coast.

His formula didn’t flag while churning through several daily events, though moments poked through the gloss, including a man heckling Morrison in the Adelaide beach suburb of Glenelg over his association with stood-down Hillsong pastor Brian Houston, and a woman yelling “go Albo” behind a stack of fruit and veg in Melbourne.

During his first visit to Hughes, the south Sydney seat he wants to take out of the hands of Liberal turncoat Craig Kelly – now the leader of the United Australia Party – Morrison ventured back behind a coffee machine, though steered clear of the milk frother after a boil-over in Brisbane.

Barista Samantha Oswald-Cox said she had been charged with foaming duties because Morrison “had an explosion last time”.

Outside the cafe, a passerby said the Prime Minister had “lost the plot”, a sentiment echoed by a middle-aged Como couple eating at another lunch-spot in the seat abutting his electorate when asked about Kelly. Of Morrison? “Hopeless,” the couple said. “Don’t trust him.”

Morrison exercised his prowess for seemingly speaking at odds with himself this week, criticising Labor’s housing policy despite having backed shared equity schemes in the past, and accusing the media of politicising the cash rate before throwing economic figures back in Albanese’s face.

He made a sport out of filibustering, barging through the rebuttals of the press pack like a harvester through a wheat field until it was time each day to retrieve his notes from the lectern and walk off-screen.

Morrison’s staged his last media appearance of the week on Saturday surrounded by stacked wine barrels in a vineyard north-east of Perth. Swilling a glass of red, he was asked what notes he could taste. “Not one of my fortes,” he replied. “I just know what I like, and so do the Australian people.”

In response to a question on Wentworth, the Prime Minister said earlier in the week he would go “where I believe it is best for my campaign for me to go”. While his schedule hasn’t been revealed, no doubt he’ll factor in where he should be on Mother’s Day.