Woman, 30, who went into early menopause and had a hysterectomy at 27 says her body feels like a 50-year-old’s with hot flushes and mood swings – at the same time her friends are having children

A woman has shared her agonising experience of going through the menopause, as well as a hysterectomy, at just 27 years old.

Jess Ní Mhaoláin, 30, a civil servant from Cork, Ireland, struggled in her early 20s with endometriosis, before learning she was experiencing early menopause.

Further complications also meant she had no choice but to undergo a hysterectomy, which is the surgical removal of her uterus.

While all her friends were having children, Jess had to come to terms with her life-changing condition and learning she won’t carry her biological children. 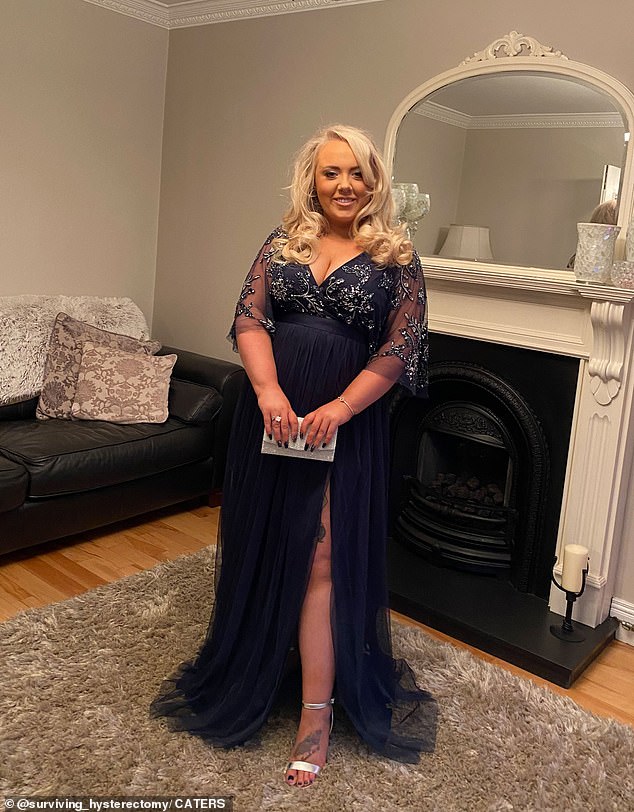 Jess Ní Mhaoláin, 30, from Cork, Ireland, said she is still processing her emotions after going through an early menopause aged 27 and a hysterectomy to help with complications from endometriosis 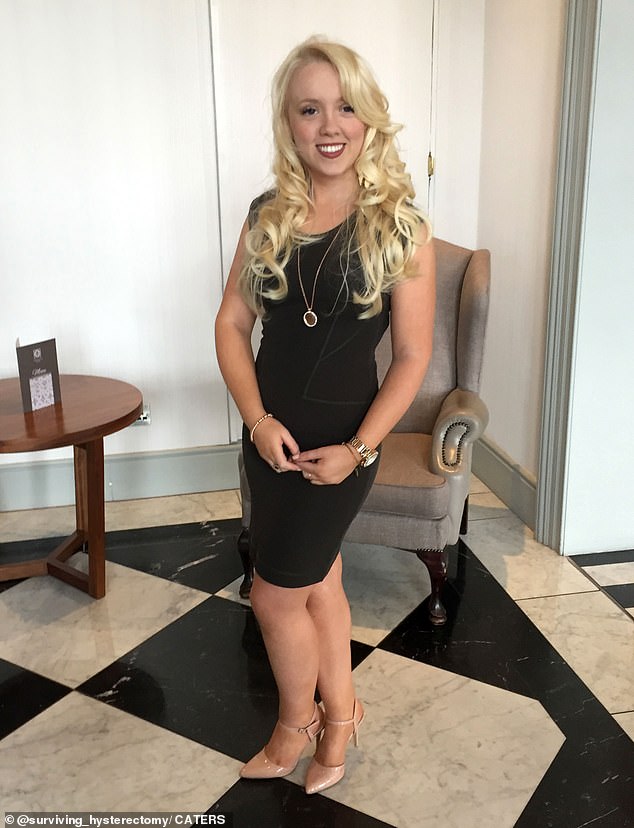 The civil servant, pictured before the procedure, said she ‘broke down in tears’ after hearing she wouldn’t be able to have children aged 27

Now she educates others via her social media, explaining what happens during the menopause as well as how it doesn’t just affect women in their 50s.

Jess explained: ‘I had a lot of health issues going on, and it happened in the middle of when all of my friends were having kids and getting married. I was sitting there thinking how will I explain to a future partner I can’t have kids?

‘I don’t have a concrete reason why I started menopause so young, I was told it was a mix of endometriosis complications and premature ovarian failure.

‘I went to a specialist in London following a friend’s recommendation as I’d already had three surgeries on my womb and was left bed bound. I was on a lot of painkillers and I knew I was out of treatment options in Ireland.

‘I remember the consultant in London told me I had one follicle, and a woman my age should have 15. I’d need to have six for IVF. 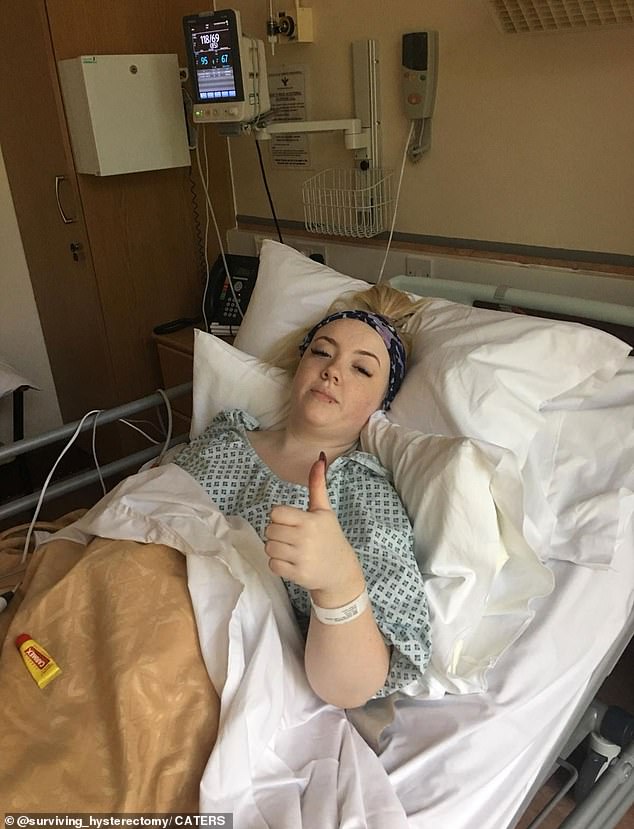 Jess in hospital after getting the hysterectomy. She said she was told the procedure would give her the best quality of life

‘I broke down in the middle of the street. I couldn’t believe the world was still moving around me with people walking past, while I’d just had the most devastating news.

‘I’d been in hospital in Ireland for three weeks in the lead up and was told everything was fine, and then in London it was completely different. I still don’t have words for it all.

‘I was given three options, but the only real option that would give me the best quality of life was to have a hysterectomy.

‘I didn’t think that would be an option, I thought this consultant could just cut out the endometriosis.

‘When you go through something traumatic you don’t think about it until afterwards. I knew the decision I had to make, I just wasn’t sure what I was expecting? The hysterectomy was the only thing that could give me any sort of quality of life. 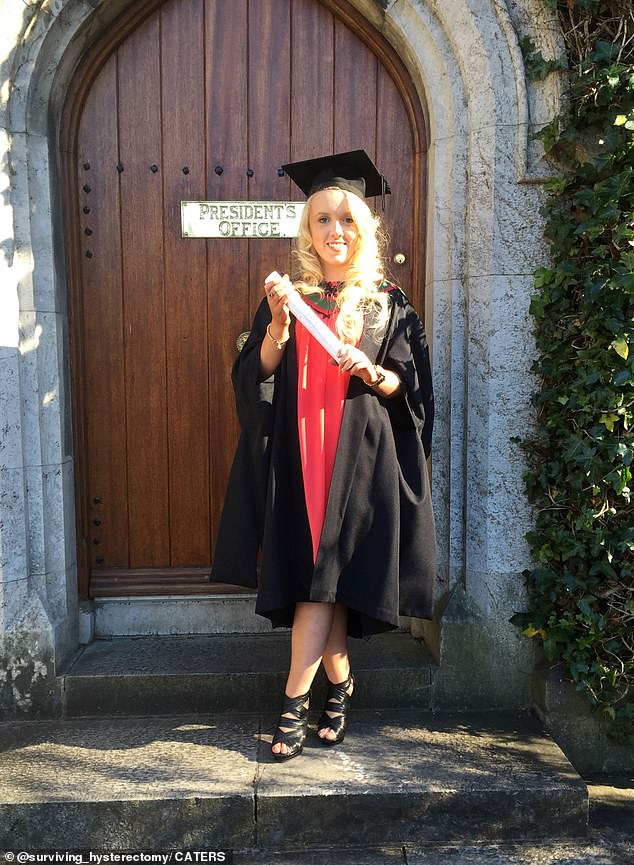 The 30-year-old on her graduation day back in 2015. She said she learned she could not have children as her friends were all getting pregnant 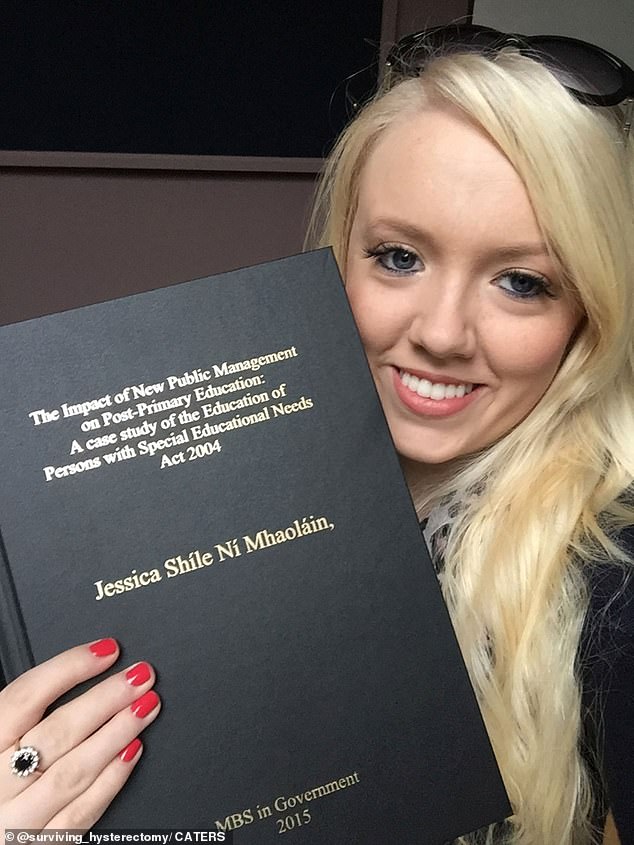 Jess proudly showing off her masters on her graduation day in 2015. She said it is still not known why she went into an early menopause 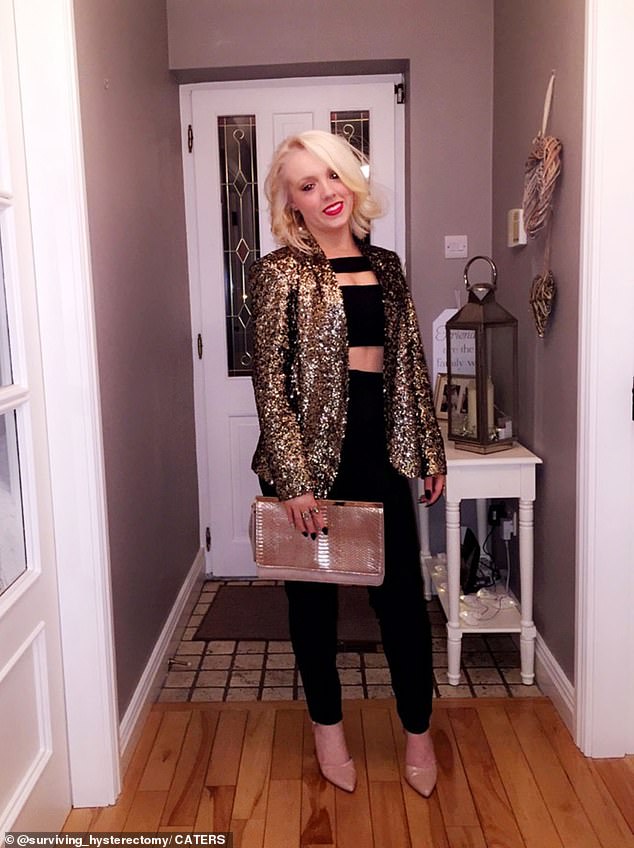 ‘I now have post-menopause, but I still have all the symptoms such as hot flushes, brain fog, fatigue, mood swings.

‘I was noticing I was really angry and agitated, the type where I would just fly off the handle with anything before crying two minutes later.

‘I also had anxiety, aches and pains in my knees and elbows, as well as numerous kidney infections.

‘I take HRT to balance my symptoms – if I don’t take it, my body feels like it’s a lot older than what I am and it’s a horrible feeling when you’re only 30. My body has gone through what most women go through in their 50s and it’s very hard.

‘I just thought it was hot flushes you got at 50, I didn’t know some women started in their 30s, I didn’t even know about the best types of HRT, or oestrogen levels, let alone the 40 symptoms of menopause. 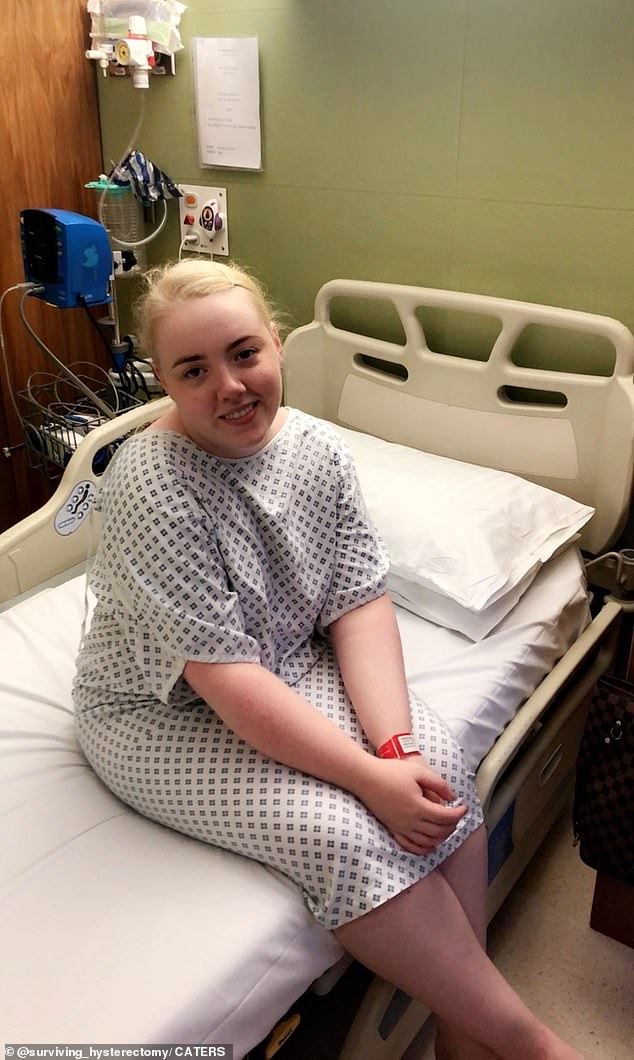 Jess recovery in hospital after the hysterectomy. She began to experience menopausal symptoms after the surgery 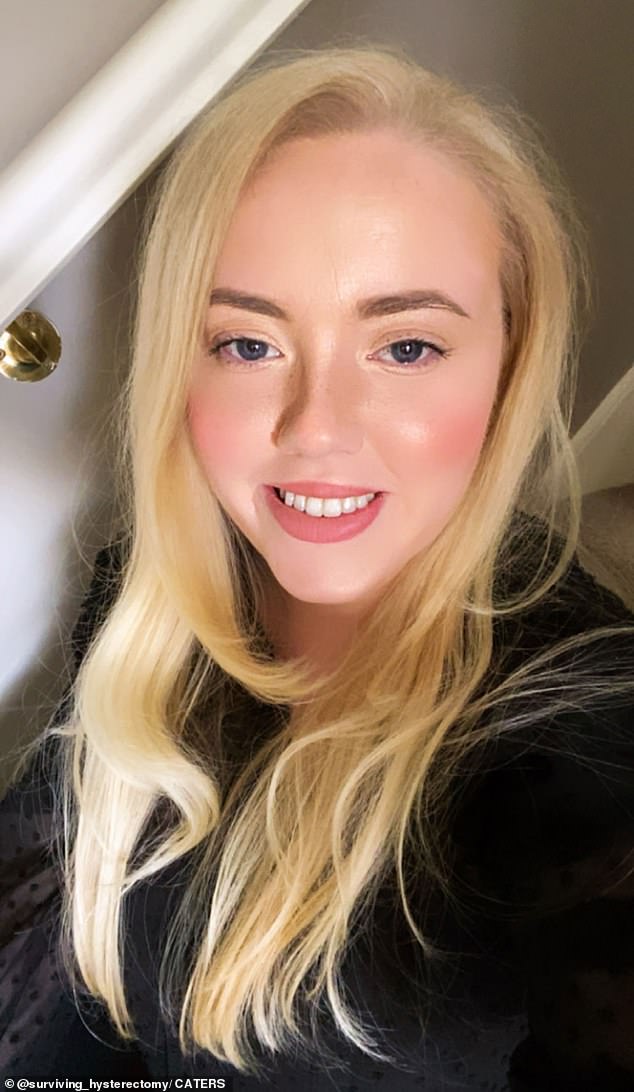 In spite of being considered ‘post-menopausal’ now, Jess said she is still have symptoms such as hot flushes, brain fog, fatigue, mood swings 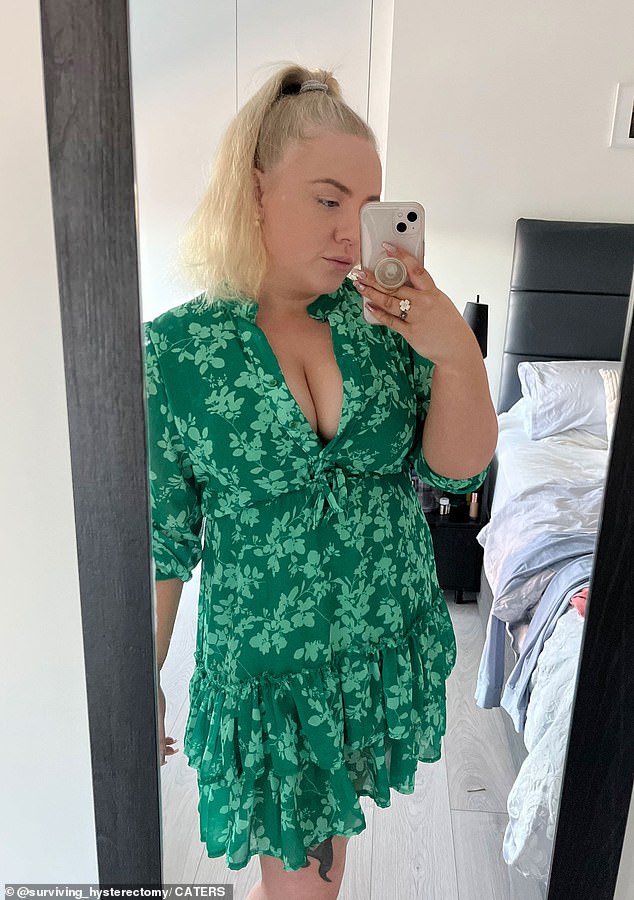 Jess now. The 30-year-old has come to terms with her menopause and now raises awareness about the condition and who is affects

‘Because I was so young, most people involved in menopause discussions are in their 40s and 50s, so I felt very isolated. My friends would be talking but I just didn’t have anything in common with them.

‘I’d say “oh I nearly missed taking my HRT today” but it would be like being in a completely parallel universe.

‘I bounced back physically quite quickly, but mentally it took around a year to process it all and for me to accept that at 27, I wasn’t going to have any children and wouldn’t be giving my parents any grandchildren.

‘My parents didn’t mind of course, they wanted me to be healthy, but I feel guilty.’

Despite Jess having to come to terms with the changes to her body, she’s now pain free, and moving on positively with her life.

Moving to Dublin to start a new chapter in her life, Jess added: ‘I had to reassess everything in my life and I made some changes.

What is endometriosis? How the disorder results in pelvic pain and internal scarring

Endometriosis is an often painful disorder in which tissue similar to the lining of the uterus — the endometrium — grows outside the uterus.

It most commonly affects the ovaries, fallopian tubes, and the tissue lining the pelvis.

The primary symptom of endometriosis is pelvic pain, although many women also experience cramping during their menstrual cycle.

Often misdiagnosed, many women only discover they have the condition during infertility treatment.

Approximately half of women diagnosed with endometriosis have difficulty getting pregnant.

While studies about the link between endometriosis and miscarriages are still ongoing, newer research suggests that the condition can leave sufferers at greater risk of having a miscarriage.

‘I was left with my own thoughts and started to question everything I did, but it gave me a lot of time to think, and do things I hadn’t done in years, such as simply going for a walk which I couldn’t do before.

‘I can also live on my own now and not have to depend on my mum. I can go out with friends when I want and don’t have to worry about how much pain I’ll be in and how I feel. I’m certainly making up for the years I lost out on.

‘I could only fit in maternity clothes before as my stomach was so swollen from the endometriosis.

‘Sometimes I wonder why this happened to me, but if you focus on the bad, you won’t get out of bed. I’m now mentally stronger.

‘Covid and being in lockdown forced me to get my head around it all, but if I didn’t bounce back after my surgery it would have been a waste.’