It was a moment that left commentators and the public alike stunned.

As crowds started to gather around Windsor Castle to lay flowers and pay their respects to Queen Elizabeth II three days after news she died, Prince William and Kate Middleton – the newly appointed Prince and Princess of Wales – came to speak to well-wishers: with Prince Harry and wife Meghan in tow.

It was a rare sign of unity between the brothers, who were widely reported to have been embroiled in a bitter feud which resulted in a deep and widening divide between the once close pair.

While the fall-out has not been formally addressed by either William, 40, or 38-year-old Harry, the schism is reported to have its roots from back in 2016, where many royal biographies claimed that William told his younger brother to take things slowly with his now-wife, Meghan Markle. Harry was thought to have been irked by William’s tone.

However, the monumental impact of the Queen’s death could be what brings the two brothers back together again.

Grief can often be a strong, unifying force that can reunite families that may have been driven apart by even the bitterest of fallouts, explains therapist and author, Marisa Peer. 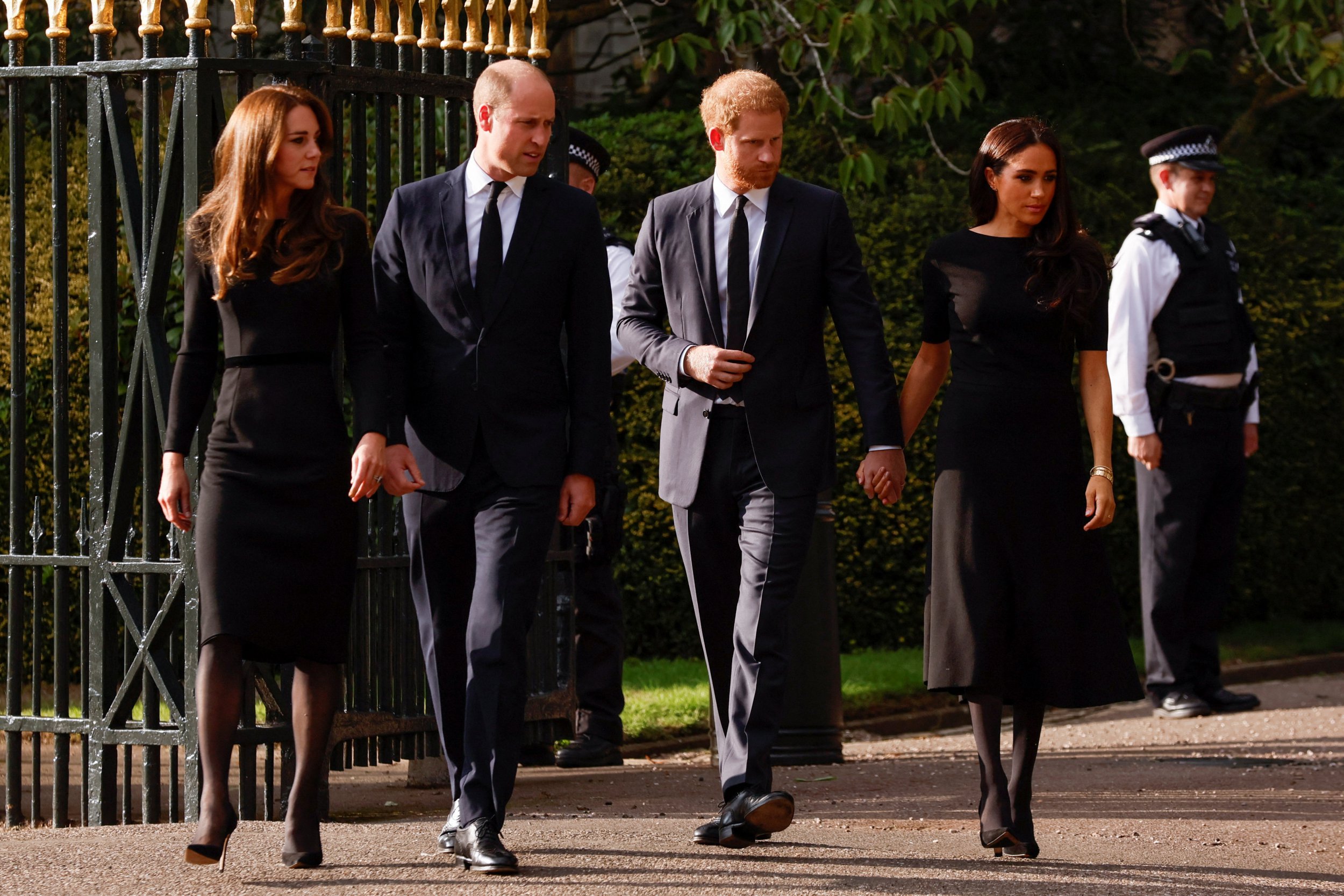 ‘Death is a sober reminder that life is short – certainly too short to fall out and live a life of regret,’ she explains to Metro.co.uk.

‘Sharing in the funeral duties can help many people put things into perspective and even long-running family disagreements, which seemed so irreparable, can dwindle into insignificance as people are reminded of their own mortality and what really matters in their lives.

‘It is no different for the Royal family and the biggest test is likely to be when all the pageantry is done and “normal service” has to be resumed in a country which many feel has irrevocably changed since the death of Queen Elizabeth II.’

It is likely to have been a difficult time for both the Princes. Not only did they have to contend with the death of a close loved one, they were both expected to play large roles in the numerous ceremonies, and the large-scale pomp and pageantry that plays a part in the death of the monarch. It’s something that may well have played on the Duke of Sussex’s mind, with Harry looking openly emotional as he followed the Queen’s coffin during her procession through central London, as she was to lie in state.

It may also have brought back unpleasant memories for the Duke, who was made to walk behind his mother’s coffin at Princess Diana’s funeral in 1997, when he was just 12 years old.

Harry has spoken candidly about the impact this has had on him in more recent years.

‘My mother had just died, and I had to walk a long way behind her coffin, surrounded by thousands of people watching me while millions more did on television,’ he said in an interview. ‘I don’t think any child should be asked to do that, under any circumstances.’

Both Princes also had to face the huge public pressure of having their behaviour assessed and scrutinised by critical eyes, with every action, even the smallest of gestures, seen as fresh meat to some scavengers eager to tear it apart.

Peer explains the weight of these added pressures would only amplify a feeling of loss.

‘It is hard enough to process your own grief after the passing of a loved one, but to do so on a public platform and so soon after a death is incredibly difficult,’ she says.

‘There is an expectation that the Royal family should act with a certain decorum and employ a stiff upper lip at all times.

‘There is a sense that however the Royal family behave, they will be criticised by some demographic. People loved Princess Diana for bringing a more human face to the Royalty, yet when other members have not adhered to the expected standards, they have been pilloried.’

Peer continues: ‘The Princes have been plunged into the spotlight amidst speculation around their existing “feud” and tensions between each other and their partners. While it makes great headlines and gossip, that adds further pressure during an already emotionally charged time.’

Knowing that all eyes would be on them and how they behave throughout the mourning period could be why the new Prince of Wales reached out to his younger brother to meet mourners, and to call for a ceasefire of supposed sibling squabbling.

Before news of the Queen’s ill health and death, eyebrows were raised that Prince Harry and Meghan were staying at Frogmore Cottage in Windsor while they were visiting the UK – just yards away from Prince William and Kate’s Adelaide Cottage – with the brothers allegedly not planning to meet.

However, with reports that William offered Harry an ‘olive branch’ in the form of going to Windsor Castle to greet grieving subjects, some experts believe that this is a sign of icy relations thawing for the pair.

William’s wife, Princess of Wales Kate Middleton, has also said it was important for the family to ‘come together’ when she spoke to mourning crowds.

Royal biographer Omid Scobie, who wrote Finding Freedom: Harry and Meghan, said of William’s manoeuvre: ‘’It is, without a doubt, a significant moment in the history of the relationship between the two brothers.’

‘William welcoming Harry to Windsor Castle and appearing in public together, chatting with the crowd and looking at the floral tributes was a true showing of unity as Harry had been notable by his absence at earlier public events,’ Peer agrees.

‘Extending an olive branch was a sign of strength and love by William, signalling that while there may have been disagreements, he will always welcome his brother back within the confines of the required protocols.’

With the funeral now over, with the Queen being laid to rest in her beloved Windsor Castle in a private, family only ceremony, Peer believes the ball is now firmly in Harry’s court as to whether he’s willing to build bridges with his brother.

‘It will now be for Harry and Meghan to reciprocate to enable the couples to resolve their differences,’ she explains. ‘They may have different perspectives on their roles as members of the Royal family, but they remain brothers who were brought even closer together by the loss of their mother at an early age.

‘Communication, compromise and forgiveness are key to rebuilding a relationship and creating

the basis for a permanent reconciliation. They need to take the time to listen to each other’s opinions and acknowledge their feelings as a sign of mutual respect. If this means compromising, then the couples need to be flexible around things that are important to both sides but ultimately reach a point of agreement.

‘Both sides need to acknowledge the role they have played in the rift and discuss what the outstanding issues are – ongoing communication at this stage is key to building bridges.

‘Maintaining contact after the public mourning will be critical to build on this foundation and retain ties in the longer term. The distance between them could either help them to live different lives but maintain a relationship, or it could allow a return to past behaviours.’

To reconcile in full view of the world watching will be difficult, and the froideur may initially still seem cool between the pair.

The brothers seemed distant throughout the funeral ceremonies, keeping apart and not seeming to interact with each other as the world watched on. Harry, however, did share a touching moment with William’s daughter, Princess Charlotte, with the Duke of Sussex giving a warm smile to the seven-year-old as the Queen’s coffin arrived.

The brothers may have kept apart out of respect, so full attention was on laying the monarch to rest. Perhaps they wanted any possible reunion to take place away from prying cameras or cameras. Or it could transpire that there are still lingering difficulties in their fractured relationship, which have remained even after their brief Windsor reunion.

Indeed, Harry and Meghan’s general relationship with the royals remains strained – the pair were reportedly ‘uninvited’ from an event at Buckingham Palace the eve of the funeral, as it was decided the meeting was for ‘working royals’ only.

Harry was also barred from wearing military uniform at the funeral, and the one he was permitted to wear at his vigil for the Queen had the ER symbol (the Queen’s royal cypher) removed – something that royal sources have said left the Prince ‘heartbroken’.

The royals are thought to have gone their separate ways after the funeral, with the family not expected to perform any further duties for another seven days as they observe an official period of mourning. King Charles III has gone to Balmoral with Queen Consort Camilla, to mourn the loss of his mother privately. William and Kate are thought to have returned to Adelaide Cottage to maintain a sense of normality for their school-aged children. Meanwhile, it has been reported that Harry and Meghan will head back to Montecito, after two weeks away from their own young children. It seems distance will keep the family separate once more.

However, if William really is keen to rebuild a relationship with his brother, then it’s something that will take a longer-term effort than simply asking Harry and Meghan to join him in mourning.

‘The key is acceptance and a willingness to let go of the past,’ says Peer. ‘Healing takes time and it will be important for both of them to acknowledge this but to be committed to taking steps to rebuild the relationship.

‘Even if this involves small gestures at the start like committing to speaking once a week, sending cards or small gifts and building on this over time.

‘Most important of all will be sticking to their agreed way ahead and not saying or doing the very things that have fanned the flames of their rift in the past.’