She also reveals how Lorne Michaels reacted to her decision to leave.

“Saturday Night Live” will look a little different next season following the exits of Kate McKinnon, Aidy Bryant, Kyle Mooney, and Pete Davidson (8 seasons) — and now, Bryant is opening up about why she decided it was time to leave 30 Rock.

Speaking with Variety about her decision to leave, the comedian — who joined the show back in 2012 for the 28th season — said her exit actually came later than expected.

“If it weren’t for COVID, I probably would have left a few years earlier,” she revealed. “But it was such a huge change. When COVID hit, it was so jarring that we were all like, ‘I’m definitely going to come back next year.'”

“And then I had to shoot ‘Shrill’ for half of last season, and so I missed a lot. And then it was like, ‘Well, now I should go back one more.’ I kept trying to seek one last normal year,” she explained. “This year wasn’t the normal year that I hoped for, but it was closer to that. It was like, ‘OK, it’s really time now.’ And 10 felt like a nice, solid round number.” 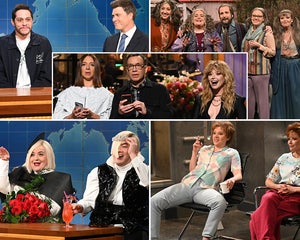 She explained that back in March or April of this year she informed series creator Lorne Michaels of her decision.

“I went to his office and was like, ‘I gotta talk to you.’ I was scared because I feel close to him and so grateful to him,” she recalled. “I didn’t want it to come off like I was leaving angrily. I am leaving with so much love. He was like, ‘I understand, and it makes sense for you.'”

Despite saying goodbye in the season finale, Bryant said she doesn’t feel like her “relationship with the show is over” just yet — adding that she’d “definitely” be down to host, should they want her to return.

As for hosts that “surprised” her during her time on the show, she pointed to Kim Kardashian, who just fronted the series back in October 2021. “[She] did so well and was up for anything,” said Bryant, “It’s totally out of her wheelhouse, and it’s very brave and cool she did it.”

Up next, the 35-year-old actress is executive producing an animated series called “Cheeky,” adapted from the Arielle Elovic memoir of the same name, for Peacock — where she has an overall deal in place. And proving she’s still tight with Lorne, he’s on board as an EP as well.