Oh, that bad boy Doctor Hugh Knight, what is he like! Fighting to save his career, his marriage and his baby daughter, he's once again engaged in all sorts of zany and tangentially medical-related shenanigans. Kudos to Nine for maintaining faith in local scripted drama in the age of streaming but, also, their faith in local scripted drama sometimes seems a tiny bit misplaced. Rodger Corser is always good value, but Hugh Knight is not an easy chap to care about. 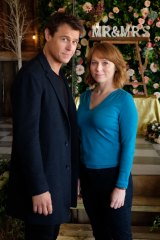 In this landmark episode of this resurrected reality zombie – brought back presumably because of a massive pro-infidelity groundswell among viewers – couples reflect on their relationships and realise that coming to the island may have been a mistake. How a single episode of Temptation Island comes to pass without exactly this happening is a deep and abiding mystery. Somehow, though, it takes six whole eps before people who've travelled to a tropical resort for the express purpose of being tempted to cheat on their partners, who are also being tempted, start to wonder whether it was a good idea.

Wondering whether things are good ideas or not is an affliction that the producers of the show have clearly been untroubled by their whole lives: somehow, after three seasons of a premise that ranks as tacky even by reality standards, a show that died a merciful death in 2003 rose from the bowels of the TV netherworld. A great option for viewers who enjoy moral vacuums and empty heads in equal portions