No one told Haim about the sharks in Sydney Harbour.

In 2014, the Los Angeles sister trio was in the city on one of their first Australian tours with the music festival Laneway. On a rare day off, the promoters secured them a boat to putter around the harbour with the Scottish band Chvrches. Used to the grimy strips of sand that constitute beaches in LA, the three sisters spent a fair whack of time in the water, only to be horrified afterward when the Australians in attendance told them of the creatures lurking in the deep. 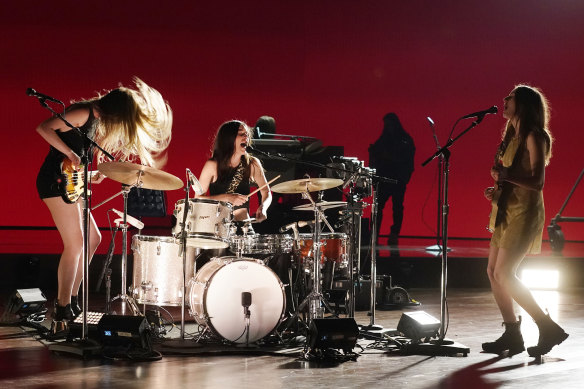 Haim’s performance at the 2021 Grammys.Credit:AP

“No one told us there were sharks!” yells Alana Haim, the youngest sister, on a Zoom call. “Later everyone was like, ‘Wow, good on you’,” adds eldest sister Este. “And we were like, ‘What do you mean?’”

Thankfully, for both the band and the music industry, Haim lived to fight another day – and will return to their friends the harbour sharks when they headline Laneway alongside acts like Phoebe Bridgers and buzzy producer Fred Again.

It has been nearly 10 years since the Haim sisters – Este, Danielle and Alana – catapulted out of the San Fernando Valley with their acclaimed debut album Days Are Gone. An intelligent and riotously fun mix of ’70s soft rock, R&B and punchy pop-rock, with big-hitting singles The Wire and Falling, the album tossed the trio into stardom.

In the years since, they’ve perfected this distinct blend both on 2017’s stadium-sized Something to Tell You and their latest record Women in Music Part III (2020), on which they gently pushed into sonic spaces they hadn’t dared to traverse before. 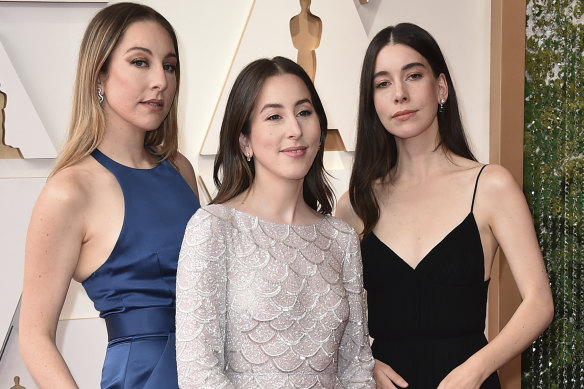 From left, Este Haim, Alana Haim and Danielle Haim arrive at the Oscars in 2022.Credit:AP

The Haim siblings are LA to their core (nearly every album features an ode to the city in some form – Women in Music Part III opens with a track called Los Angeles) but Australia holds a particular place in their hearts from the Days Are Gone era.

“Being there was such a huge part of our story,” Alana says, before explaining that the finishing touches of the album were actually done in a studio in Sydney while on tour. “We were in the studio in Australia for like four days straight. I remember hitting that button that approved Days Are Gone. We had no idea what was going to happen after that. That was the last moment of calm before the storm.”

But the band isn’t sentimental about the impending 10-year anniversary. They don’t think they’ve changed much in that time, although their confidence has improved. “I think we’re more fearless than ever,” says Este after a pause. “We’re open to any and all the opportunities that have come our way – we’re not scared to say yes.”

“I feel like we never gave a f—,” says Alana on the topic of caring about what other people think of them. “But I think that was the greatest thing we had: we had each other. So when some obstacle comes in front of us, we’re lucky that we have all three of us. We’ve always known what we wanted to sound like and who we wanted to be as a band. We just wanna play our music and have a good time.” 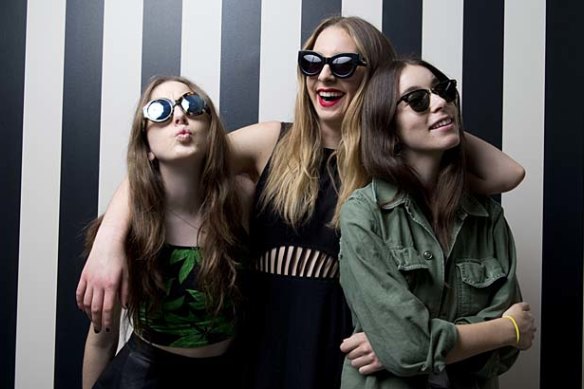 Alana, Este and Danielle Haim in Australia in 2014.Credit:Harrison Saragossi

And they always do seem to be having a good time. To speak to Haim means bursting into laughter – whether it’s at the stories they tell, or how they fall over each other while speaking and finish each other’s sentences. Alana and Este are by far the most talkative – Danielle, who is the main vocalist for the band, is much more reserved, mostly leaving the interview to her sisters.

It’s the kind of natural charisma that most bands could only dream of, and it’s a key part of what makes the band such a magnetic live presence. Come for the brilliant musicianship and impeccable pop hooks, stay for the sisters taking the mickey out of themselves and each other.

It’s also a charisma that goes far beyond their live shows or interviews. In 2021, Alana made her feature film acting debut in Paul Thomas Anderson’s Licorice Pizza, an offbeat coming-of-age love story set in Los Angeles in the early ’70s. Playing the lead Alana Kane, her expressive and warm performance illuminated the whole film – and rightly earned her effusive praise from critics.

“I would love to do it again,” Alana says. In classic busy Haim form, she rolled straight from the hectic promotional tour for the film into the band’s tour for Women in Music Part III, and there’s barely been a moment to reflect. “I’m still on that ride, and I would 100 per cent do it again, if someone will have me.” 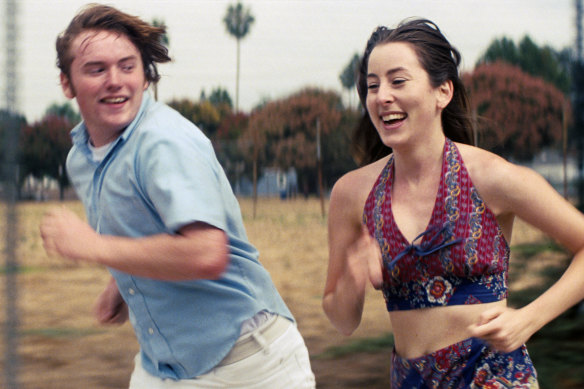 Cooper Hoffman, left, and Alana Haim in a scene from Licorice Pizza.Credit:AP

She’s not the only Haim sister to have found themselves on a shoot recently. Towards the end of last year, eagle-eyed fans spotted Este and her friend, pop singer Kesha, partying with the cast of HBO’s The White Lotus in Sicily. It wasn’t just a chance meeting: she’d been invited to the island by her friend, White Lotus executive producer Dave Bernad, for a much-needed distraction after a break-up. Before long, she was DJing and singing karaoke with the cast every night and working with the musicians on set on the song arrangements during the day.

“By the end, the producers were like, ‘Well, we should probably give you a job title and pay you’,” she says, laughing. Her unofficial title on set was “vibe conductor”, her official title by the end was music consultant.

They might not take themselves seriously but their music is another matter. Women in Music Part III was one of 2021’s best records – unexpectedly personal and intimate, incisive, and brimming with personality and curiosity. Tracks such as Summer Girl and Los Angeles capture the warmth and contradictions of their famous home town; I Know Alone wrestles with the complicated dynamics of touring and loneliness; Man from the Magazine addresses the inappropriate questions the trio has endured in interviews over the years.

The Laneway shows will be the first time Australian audiences can experience this album live – which, as the sisters explain, was how it’s meant to be experienced.

“We started in 2018 and we finished it in 2019 and we had really simplified things because we really wanted it to be a raw album, production-wise,” says Este. “So when we couldn’t tour because of the pandemic, we felt like there was a part missing.”

It has been a tough 12 months for Australian festivals. Can these seasoned festival-goers give us their advice on how to breeze through? “Wellies!” they yell in unison, before Alana adds, “Just wear clothing that it’s easy to pee in.”

After all these years, Haim just want comfort.

“When I was younger, I used to go to festivals and have all these crazy outfits that were so uncomfortable,” Alana says. “Now at 31, you will find me in my PJs walking around the festival.”

Laneway tours Australia – including Brisbane, Sydney, Adelaide, Melbourne and Perth – from February 4 to 12.