Introducing workplace health and safety legislation that ends employers’ ability to take out insurance against workers’ deaths, Burke said it was unacceptable that Australians faced the occupational hazard of the potentially fatal lung disease in 2022. 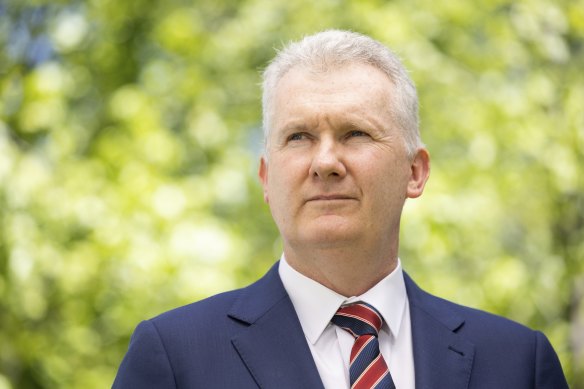 “Urgent action is needed to protect workers from future harm and to support those who have already been failed,” Burke said in parliament.

“This government hears the calls for urgent reform. We are committed to getting national traction on this issue.”

The Construction, Forestry, Maritime, Mining and Energy Union announced last week it would ban the use of engineered stone if the federal government failed to do so by 2024, labelling the material often used for kitchen benchtops the “asbestos of the 2020s”.

Manufacturer Caesarstone and the Master Builders Association have been contacted for comment.

The union said Curtin University modelling estimated 10,000 Australian workers would develop lung cancer and up to 103,000 would be diagnosed with silicosis – where inflammation and scarring in the lungs lead to reduced oxygen intake – as a result of their current exposure to silica dust at work.

Engineered stone is commonly used in benchtops as it is cheaper than marble. Dry cutting of the stone was banned in Queensland in 2018, Victoria in 2019 and NSW in 2020 to help prevent the inhalation of silica dust.

The National Dust Disease Taskforce reported in July 2021 almost a quarter of engineered stone workers who had been in the industry since before 2018 were suffering from silicosis or other silica dust-related diseases.

The former government agreed with the taskforce in March that “further decisive action is required to better protect workers”.

In his second-reading speech on the government’s Work Health and Safety Amendment bill, Burke said the legislation would be expanded to include negligence as a fault element in workplace incidents, adding the “bar for conviction is currently set way too high”.

“This change means that both reckless and grossly negligent employers who expose workers to serious risks will face the most serious consequences and penalties,” Burke said.

The bill also prevents an operator penalised for a workplace incident from being indemnified by insurance.

“The penalties in the act are there as a deterrent,” Burke said. “Allowing companies to take out insurance against these penalties makes workplace injuries just another cost of doing business.”

“No longer will a statutory penalty be just another line on a balance sheet that an employer can recover from their insurance. While a family member has lost a loved one in a workplace fatality,” Burke said.