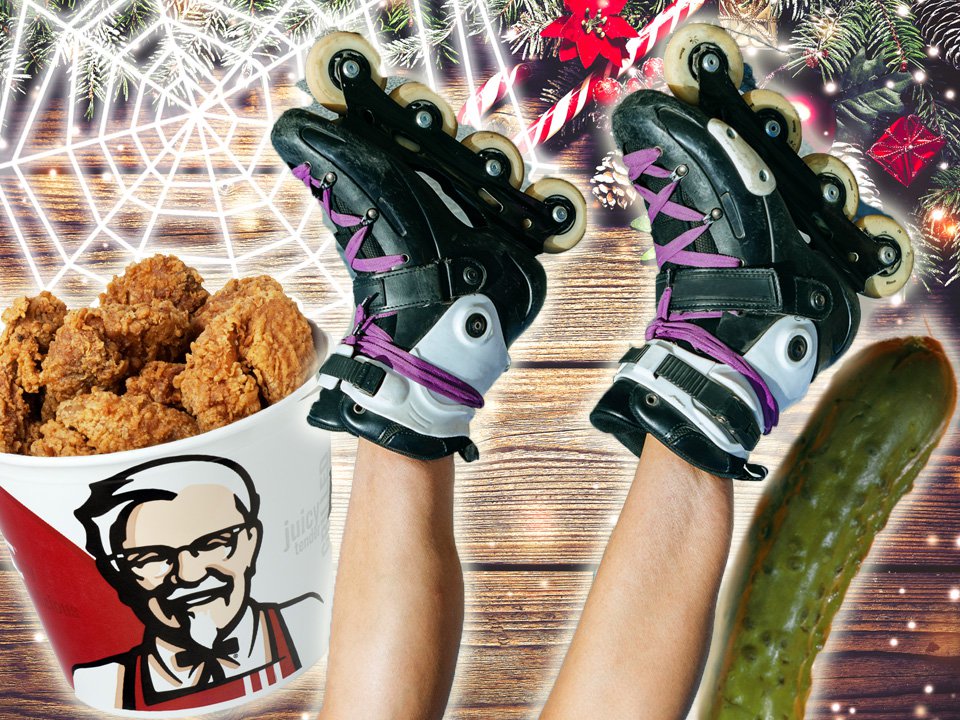 Christmas is a time for celebration the world over – but that doesn’t mean those celebrations always look the same.

While Brits might be content with our traditions, like watching the best Christmas films for the 100th time while eating a mince pie, in countries all over the world, traditions differ tremendously.

From roller skating to mass (really) to getting naked in the sauna with your nearest and dearest (again, really), let’s look at traditions from around the world.

Christmas traditions around the world: why do they skate in Venezuela?

The people of Venezuela have gone and upped the ante with a tradition that makes building snowmen look positively dull.

For locals in the capital of Caracas, it is customary to strap on your roller skates and glide to Christmas mass.

As legend has it, children go to bed with a piece of string tied round their toe and the other end dangling out of the window.

As skaters roll past, they give the string a tug and children know that it’s time to, well, get their skates on.

Venezuelans are known for their love of fireworks and Christmas is no exception – residents awake to the sound of firecrackers exploding in the street, adding to the peel of church bells.

Skating to mass became so popular that the government took to closing streets until 8am so that families could skate together in safety.

It isn’t clear precisely how or why this unusual tradition started but sources suggest it is an alternative to sledding – December temperatures in the southern hemisphere can reach into the high thirties.

Another annual tradition that might surprise some is the Japanese yen for southern fried chicken instead of the Turkey and trimmings.

Back in 1974, the fast food giant KFC released a festive marketing campaign in Japan with a simple slogan ‘Kurisumasu ni wa kentakkii!’ (Kentucky for Christmas) and, well, whoever came up with that needs a raise.

It’s remained a tradition ever since, even though Christmas isn’t actually a national holiday in Japan.

Families from all over the country still head to their local KFC for a special Christmas Eve meal.

Christmas in Finland: having a festive sauna with your dead ancestors

Saunas might be a selling point for gyms in the UK, but sauna culture is more important in places like Finland.

They are often places to invite colleagues or new acquaintances as a sign of respect, and at Christmas time, this hot spot becomes a sacred space associated with long dead ancestors.

On Christmas Eve, it’s customary to strip and do a stint in the sauna, which is also believed to be home to the legendary sauna ‘elf’.

After the sauna session, Finns head out to the evening celebrations – while spirits of those ancestors take their place in the bubbling water.

The tradition of having and decorating a Christmas tree has unclear origins, with both Estonia and Riga laying claim to it.

The cities of Tallinn in Estonia and Riga in Latvia both claim to have put up the first Christmas tree in their town squares; Tallinn in 1441 and Riga in 1510.

Regardless of who started this tradition, Germany have found a way to make theirs unique.

Hiding a pickle in the tree to find is a tradition that’s thought to come from an old tale involving St Nicholas, where two young boys were held as prisoners inside a pickle barrel. The heroic Saint Nicholas rescued the boys and brought them back to life.

Hidden among the branches, it is thought that the first person to find the pickle gets an extra gift!

The Ukrainian custom swaps out tinsel and twinkles for creepy crawlies.

Spiders and webs are believed to bring good luck in Ukrainian culture, but this particular custom goes back to a folktale about a poor widow who could not afford to decorate a tree for her children.

Legend has it that spiders in the house took pity on the family, and spun beautiful webs all over the tree, which the children awoke to find on Christmas morning.