‘We want all the children to feel like they’re part of something special!’: Myleene Klass reveals she’s celebrated Christmas early with her fiancé Simon Motson and their blended family

Myleene Klass got into the Christmas spirit early this year as she celebrated ‘Fakemas’ with her fiancé Simon Motson, her children and step-children.

The singer, 43, revealed she has celebrated Christmas two days early so she could spent the occasion with her ‘blended’ family.

She shared a fun-filled video to Instagram on Thursday showcasing their festive day – which included opening presents, making gingerbread houses and eating a roast dinner. 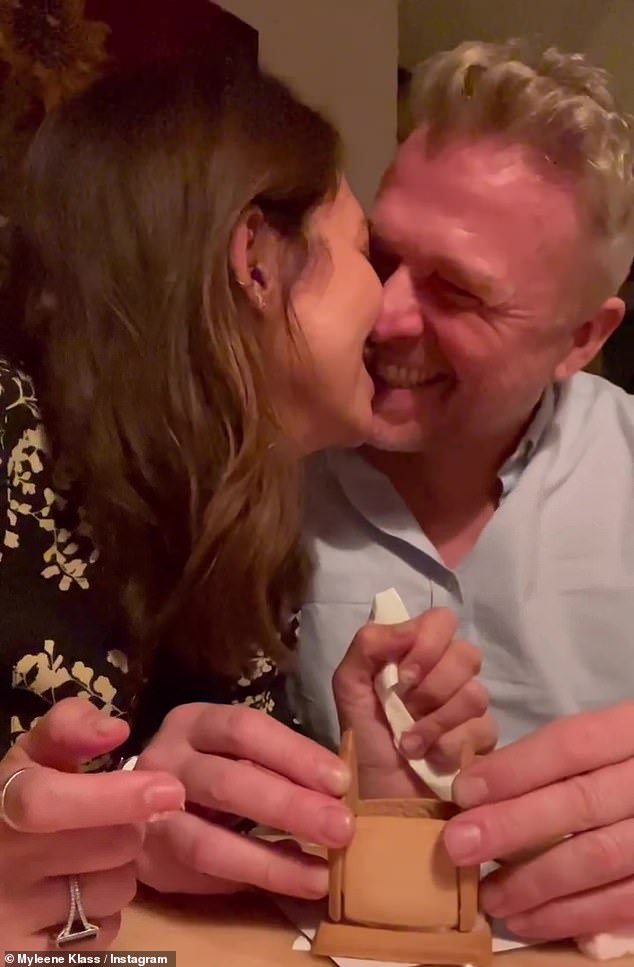 Loved up: Myleene Klass revealed she has celebrated Christmas two days early so she could spent the occasion with her fiancé Simon Motson (pictured), her children and step-children

Myleene and Simon share one son Apollo, two, while they both have two children from previous relationships – Myleene has Ava, 14, and Hero, 10, while Simon has a 13-year-old son and nine-year-old daughter.

In the video, all the children joined the couple to open their presents in their pyjamas, which included a pair of ‘Drag Queen’ pink heels for Hero and a kitchen set for Apollo.

Myleene and Simon then cooked the Christmas dinner – a roast dinner and Christmas pudding – before the family all built gingerbread houses to end the jam-packed day. 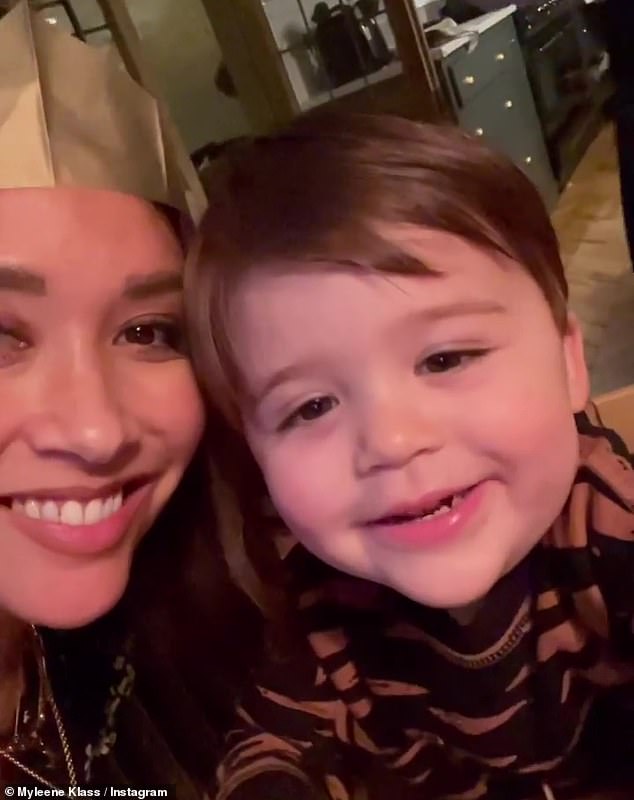 Family: She shared a fun-filled video to Instagram on Thursday showcasing their festive day – which included opening presents, making gingerbread houses and eating a roast dinner

In a lengthy caption alongside the sweet video, the Hear’Say band member explained she had celebrated ‘Fakemas’ with her family so that all the children could spend the day together.

She wished other ‘blended families’, a word used to describe a family consisting of children from past relationships, and said she felt it was important to make the day ‘special’.

She penned: ‘As many of you gear up for xmas, we’ve already had ours! We are a blended family of 7 and every other year, we have ‘Fakemas’ so that all the kids can celebrate together.

‘It’s not what I ever imagined or experienced myself, so I never initially knew how to make it work, but it somehow just does! 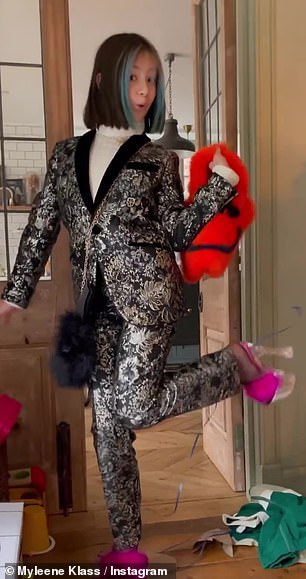 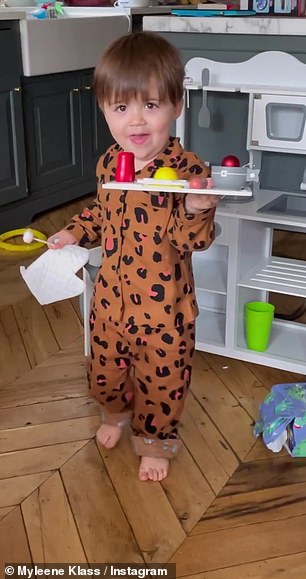 Gifts: In the video, the children joined the couple to open their presents in their pyjamas, which included a pair of ‘Drag Queen’ pink heels for Hero and a kitchen set for Apollo

‘Sim and I work really hard at making everyone in our blended family feel a part of something special whether they live with us every day or split households and if that means moving the day, that’s what we do.

‘All our children unanimously agree it’s not about the date but rather just being together.

‘I’m posting this as I know there are many of you in similar situations where life has thrown a curve ball and you just have to figure it out as you go.’ 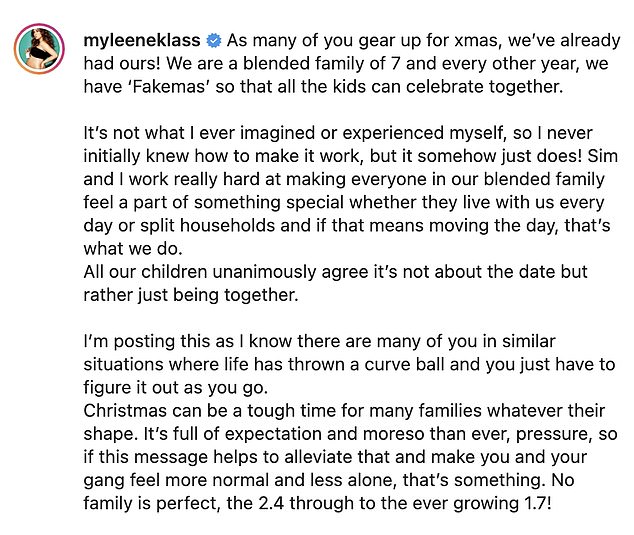 Merry Christmas: In a caption alongside the video, the Hear’Say band member explained she had celebrated ‘Fakemas’ with her family so that the children could spend the day together

Myleene went on to say that Christmas can be a pressured and difficult day and said she hoped that her words would help others over the festive period.

She continued: ‘Christmas can be a tough time for many families whatever their shape.

‘It’s full of expectation and more so than ever, pressure, so if this message helps to alleviate that and make you and your gang feel more normal and less alone, that’s something.

‘No family is perfect, the 2.4 through to the ever growing 1.7! Merry Fakemas blended families, Step Mums, Dads and siblings, half brothers and sisters, adopted, fostered and ‘others’. We see you. x 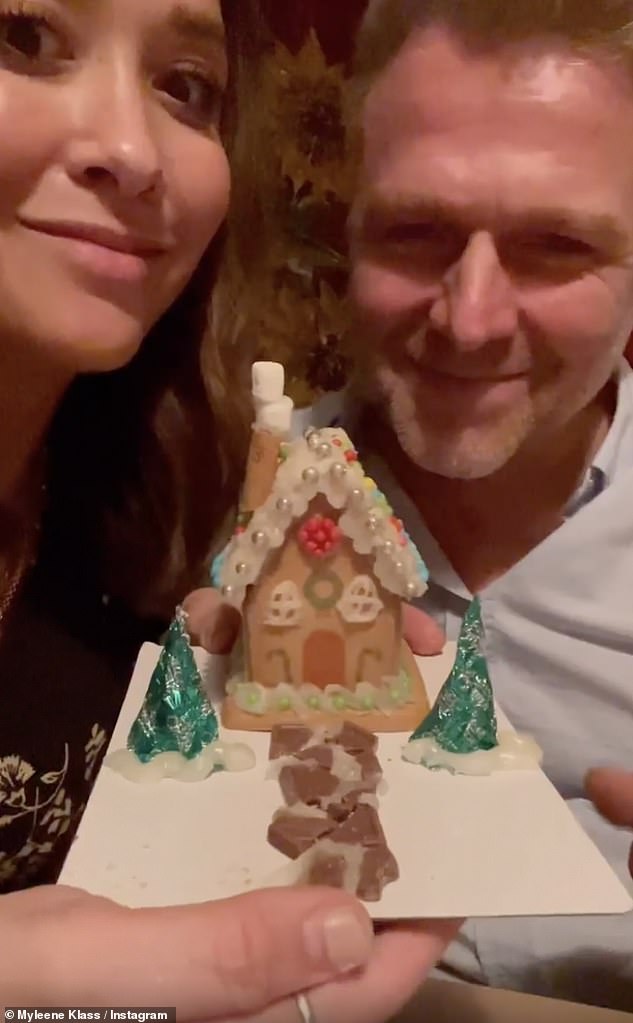 Festive: Myleene and Simon then cooked the Christmas dinner – a roast dinner and Christmas pudding – before the family all built gingerbread houses to end the jam-packed day

Myleene shares her two daughters with her ex-husband Graham Quinn, who she split up from in 2013.

She started dating Simon in 2015 and the pair got engaged last year when he proposed on their fifth anniversary.

Earlier this year, she gave a rare insight into becoming a step-mum as she appeared on the Made By Mammas: The Podcast, hosted by Dr Zoe Hardman and Georgia Dayton.

Of being a step-mum, she reflected: ‘It really takes you being the most mature you can possibly be, even when you don’t want to be.

‘And within ten minutes, that’d gone out of the window when one of them is hanging off the monkey bars and another is trying to put a ball through a window.’ 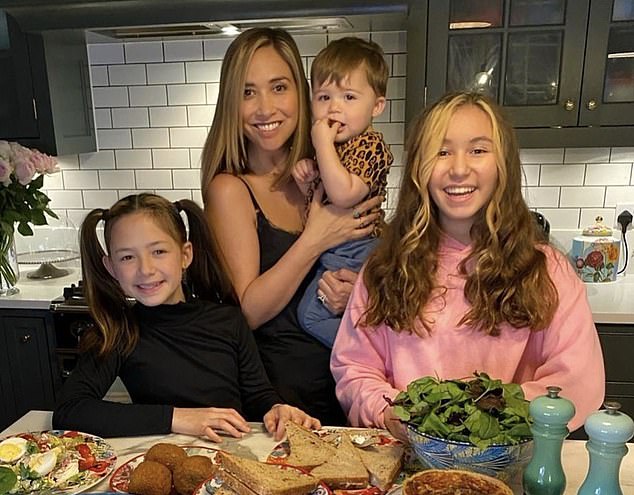 Blended: Myleene and Simon share one son Apollo, two, while they both have children from past relationships – Myleene has Ava, 14, and Hero, 10, while Simon has a son and daughter

‘In the end I just changed all that around and I sat them down around the table and said look, the only way we’re going to do this is, I see it as we’re all in a boat, this is how I view it.

‘And one of you rocks the boat, we’re all going to feel it. And if one of you goes overboard, I’m going to grab you and make sure you’re safe. That’s the only way we’re going to get through it is if we’re all in this together.

‘If anything gets a bit rocky or if anyone’s in trouble, we all just say “remember the boat”.’

Myleene went on to talk about how she doesn’t give her two daughters pocket money, and instead has encourages her eldest Ava to teach the piano to earn her own.

‘They have to learn the value of money,’ she said. ‘So she is now teaching and she’s got six pupils now. It teaches her time management, she’s got to be organised with it, she’s got to plan her lessons and she then has to manage her money. 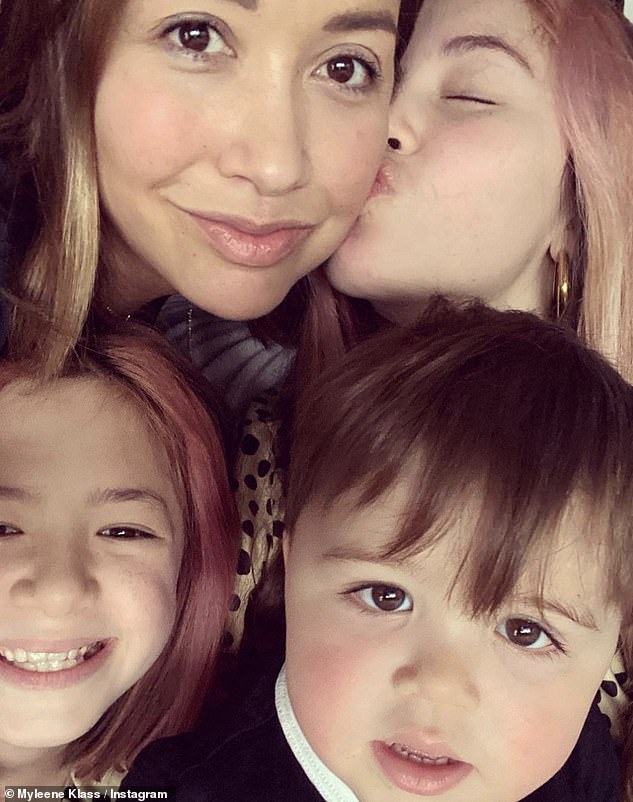 Love: Earlier this year, she gave a rare insight into becoming a step-mum as she appeared on the Made By Mammas: The Podcast, hosted by Dr Zoe Hardman and Georgia Dayton

‘As women, we’re often the ones that get left behind, we don’t want to ask for our pay rise, and we’re not always on top of our finances.’

The talented pianist also touched upon how she juggles her career and motherhood.

Myleene said there has been time when she’s been presenting Smooth Radio, while expressing milk for her son Apollo.

She said: ‘I really loved breastfeeding all my children.

‘I’ve expressed on air more times than I care to remember. To the point where my producer would just be like, “could you just turn the pump off because we’re going to go live in 10”, so I’ll just give it a little click, do my chat, introduce Chaka Khan and off we pump again.’ 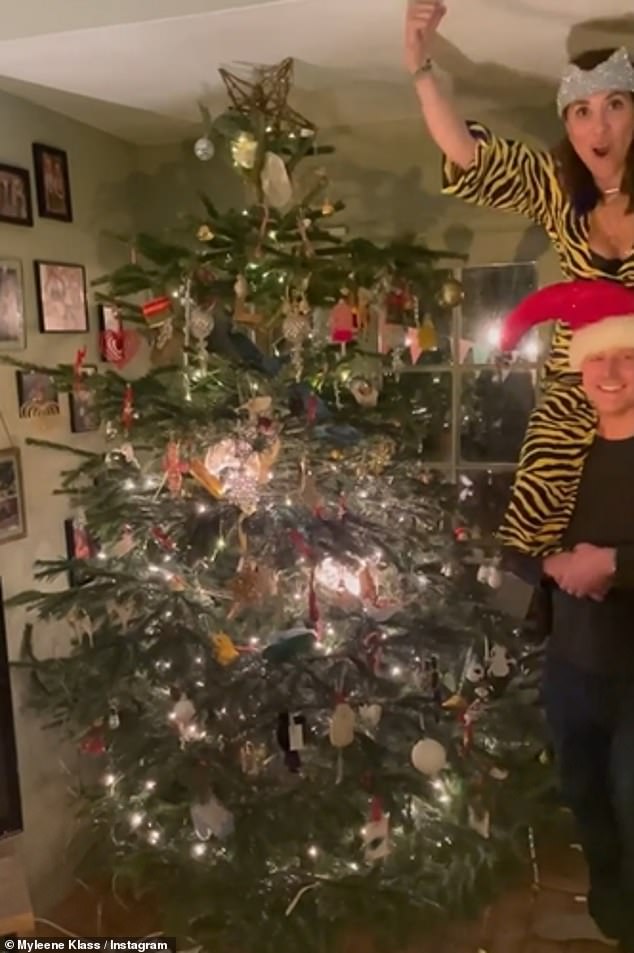 Family affair: At the end of November, Myleene Klass went for a homespun approach to putting up her tree, showing off her mismatched baubles and ornaments in a sweet Instagram video

Myleene got engaged to Simon last September, admitting she was shocked when he popped the question on the fifth anniversary of their first date.

Speaking to Hello! magazine, Myleene told how Simon got down on one knee in their garden shed which he made into a replica of where they had their first date and surprised her with a nine-carat diamond ring.

She said: ‘We’re engaged! I was absolutely blown away. He even replicated the dinner we had – burger and fries, followed by cherry pie.

‘When he got down on one knee and started fumbling around under the table, I thought he was joking. Then I thought: “Oh my God, he’s for real.” I was completely speechless.’

Simon added: ‘It’s quite a blur but I think I said something along the lines of: “Myleene Angela Klass, will you marry me?”

‘And I had to say it again… and I think I said it a third time. Finally she said yes and we were both in tears.’