‘The burnout we suffer is crippling’ explains Katie Hereson, a 28-year-old support worker in Glasgow.

She started working as a care worker in January last year, and on most days – before she has even started her shift – she is physically exhausted.

Katie could easily catch a bus, but instead, walks to work as it will save her several pounds a week. Her hourly rate of £10.02 barely covers her bus fare, let alone her bills.

‘There was a month I was walking everywhere because my energy costs were higher as it was so cold,’ she explains. ‘Sometimes I would walk an hour or so to get to some of my service users. There was one shift where I checked my Fitbit, and it turned out I had walked 11 miles that day. I always call it my 11-mile shift.

‘But then sometimes service users live far out, so I can’t walk to them and have to get a bus, which can cost around £10 for the journey.

‘It’s so difficult as I can’t run the risk of spending all of my cash on bus tickets and then finding out that I don’t have enough to buy food.’

However, money isn’t the only stress Katie faces, as she explains no days are ever the same. Along with the long hours, she sometimes endures the occasional instance of dealing with verbally abusive service users.

‘I also have service users who can be violent because of their conditions, some who have a history of criminal charges and some whose mental health conditions can make them lash out verbally,’ she explains.

‘I have been incredibly lucky that all my colleagues and my manager are excellent at their jobs and carry themselves with good humour and support for each other. That has been a gift that most aren’t so lucky to get.’

According to Carers UK, at least 1 in 8 adults (around 6.5 million people) are carers. An estimated 6,000 people take on a caring responsibility each day, equalling over 2 million people each year. 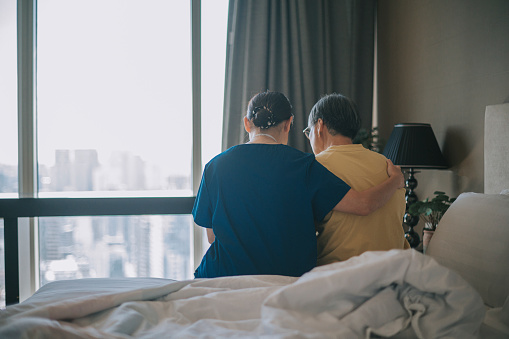 Care workers like Katie make a valuable contribution to society, ensuring the physical and mental health of some of the nation’s most vulnerable. Yet, the sheer pressure and stress of working in the care sector often goes unrecognised.

This is especially the case when you consider the low pay, which is being further intensified by the rising cost of living, pushing many to a breaking point.  According to Skills for Care, care workers approximately earn between £9.66 and £13.74.

For Katie and her colleagues, there are only so many areas in their lives where they can make financial shortcuts. ‘The work we do is incredibly emotionally draining and when you pair that with the stress of having to do your entire week’s grocery shop from the reduced section of the supermarket, it doesn’t feel sustainable.’

Similarly, Rachel McKenzie, a 26-year-old support worker from Glasgow, says that working long hours are unsociable have been detrimental to her mental health. ‘The sector as a whole is chronically understaffed resulting in being overworked,’ she says.

What many don’t realise is that those working in the sector are also having to support service users with managing their finances. In some shifts, Rachel tells Metro.co.uk that she has to purchase food cupboard items for her struggling clients which has a knock-on effect on her own finances.

‘One of my service users, Tania*, had worked her whole life before succumbing to disability,’ she explains. ‘She never had much, but it had been enough. As of late, with the soaring cost of energy and food price increases, it is not uncommon for me to arrive at her home mid-week only to discover that her milk and bread have run out, as has her money.

‘I awkwardly have to explain to her that I can’t always buy her more bread and milk. She will ask why and I will explain; there is only 50p to her name until next week, that costs are rising, that simple food items are rapidly becoming unattainable.

‘Sometimes I just buy her the bread and milk so she can enjoy a simple cup of tea and toast.’

Earlier this year, the BMA (British Medical Association) warned of a ‘an unprecedented crisis in social care’ and released a report outlining the challenges the sector is facing, which will impact on Britain’s most vulnerable.

The findings calls for urgent reform in the social care sector, explaining that ‘years of chronic underfunding, severe workforce issues, and a fragmented system mean we cannot adequately meet the growing needs of the population.’

Dr Anil Jain, chair of the BMA’s committee on community care added: ‘It is alarming that we could see up to 500,000 vacancies in social care by the end of 2030. This, alongside an ageing population, means that we are effectively facing a ticking time bomb.’

The report urges the Government ‘to effectively remunerate and value care workers to ensure that there are enough staff to look after all those in need of social care in the future.’

It was for these very reasons that 24-year-old creative, Chrissie Okorie from London found herself having to quit the care sector. After working 12-hour long shifts and constantly feeling tired and stressed, she knew she couldn’t work while studying at university.  ‘I worked in end-of-life while funding my university course, but the hours were too long. It wasn’t very flexible and the salary could barely cover my expenses,’ she tells Metro.co.uk.

Understandably, carers must be willing to commit a lot of time and energy to their service users, which makes it difficult to balance work with other areas of their lives. When Chrissie’s father fell sick from Covid-19, management were unable to give her time off, leaving her with no choice but to resign.

‘I was disappointed that I had to leave because working with elder patients in dementia was really rewarding, but it was just near impossible to continue.’

And Chrissie is not alone. The number of those working in the care sector are leaving in the dozens, a figure that has steadily increased since the pandemic. The amount of empty vacancies is at its highest since records began on 2012/13 with 165,000 posts waiting to be filled. Last year vacancy rates were at 110,000 and this has increased significantly by 52% with an added 55,000 posts this year.

For Shahar Soriano, a 36-year-old manager at a carers housing association, this is hardly surprising. Having worked in in the sector for over five years, he initially started his career as a support worker in domiciliary care, then as a care coordinator, and now as a manager.

What drew Shahar to the role was seeing how rewarding it was taking care of his late grandmother and wanting others to access the same quality of care. ‘I love making a positive impact on people’s lives. It really pushed me to change my life goals, and so I decided to continue in the care sector,’ he explains.

Since the pandemic, however, Shahar has seen a huge turnover with many of his colleagues leaving for service jobs in UberEats and JustEats, which provide a better work and life balance, as they are often paid in block hours, whereas those in the care sector are on zero-hour contract.

The hours also don’t account for the constant travelling required between different service users. ‘Sometimes you have to go to different clients’ homes throughout the day and going from client A to find B takes 30 minutes. That half and hour of travelling time in between aren’t paid.  So even if you’re working a 12-hour day, you’ll only get paid for nine,’ adds Shahar.

As a manager, the constant stress of the job means that he must be constantly available leaving little time for a personal life. He explains that in domiciliary care, 24/7 emergency phone lines are available to service users for care assistance outside of working hours. With a such a shortage of staff, there is barely anyone available to work outside of their shift, which means many like Shahar and his colleagues are forced to drop everything and attend to these emergencies.

‘When things were at their busiest, I’d hear the phone constantly ringing while I was taking a shower,’ he says.

‘We get a lot of complaints that people aren’t turning up on time or at all, and this is hard to manage when we have barely any staff or they are off sick. This simply causes a ripple effect on the service which only just adds to the stress. Sometimes it was so bad that I’d get a phone call every five minutes. I’d drop everything because I’d have to attend to a service user.’ 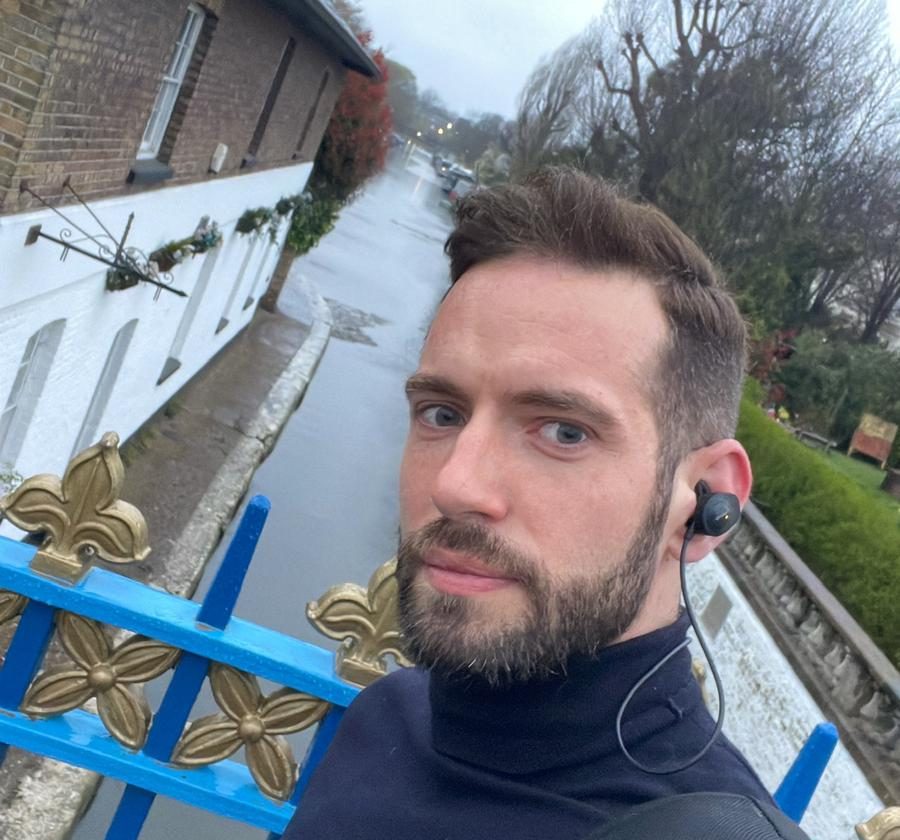 Yet throughout his many years in the sector, Shahar says that right now it is tougher than ever. ‘It was always stressful, and the work-life balance wasn’t perfect, but it was manageable,’ he explains. ‘As soon as the pandemic struck, however, it really hit us hard, and we had an unprecedented shortage of staff.’

Although his salary is significantly higher than Katie or Rachel’s, Shahar is still anxious about his financial stability. He fears that the rise in living costs will mean that he will forever remain in debt.

Like Rachel, he has to support his clients who are stressed about rising costs, while it also deeply affects him and his colleagues. ‘Right now, my clients are scared, and these are some of the most vulnerable people who don’t have family members to take care of them.

He adds ‘I’m also seeing my colleagues go to food banks and needing to rely on Universal Credit benefits and they are concerned about how they will pay for the energy bills.’

In December 2021, the Department of Health and Social care released ‘People at the Heart of Care,’ an Adult Social Care Reform White Paper. While it rightly recognised the poor mental health and ‘burn-out’ faced by workers, it also made vague reference to their financial plight.

Along with mention of an increase in the National Living Wage by 6.6% in 2022, came a commitment to reach more of those on median earnings by 2024, which the paper claims will ‘give the lowest-paid care workers a real-terms pay rise.’ Yet with soaring inflation and sky-high in energy bills, it’s clear that this isn’t sufficient to meet even their most basic needs.

In his first speech as Prime Minister, Rishi Sunak has not made any reference to the challenges being faced in the social care sector. Yet care organisations and sectors continue to place pressure on the government to allocate more than the original commitment of £13bn to the sector.

Time will only tell if Sunak can give care workers the priority they desperately need and if the government can follow through on its heavy promises.

‘Often, I sit with my service users while they eat, while watching the politicians on the news argue that we all have to make sacrifices. However, working In the care sector, our entire career is built on sacrifice to help others,’ Rachel points out.

‘The cost of living is pushing us all to a crisis point, hardly being able to meet our own basic needs. The way we have been given little-to-no support shows just how much our hard work goes in vain.’