In a statement posted to Instagram on Sunday morning, Higgins said she knew the odds of securing a conviction were slim. 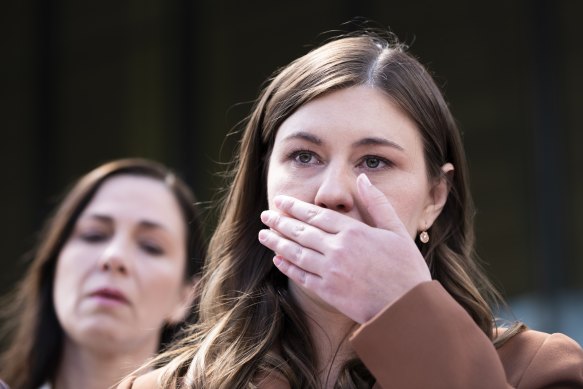 Brittany Higgins has released a statement after prosecutors dropped rape charges against former political staffer Bruce Lehrmann over fears for her mental health and safety.Credit:Rhett Wyman

“The criminal justice system has long failed to deliver outcomes” in sexual assault cases, she said. “I knew the odds were stacked against me from the outset.”

On Friday, ACT’s Director of Public Prosecutions announced a retrial against Lehrmann over the alleged rape Higgins had been aborted, and the charges dropped because of serious concerns for Higgins’ mental health.

Shane Drumgold SC said it was no longer in the public interest to continue because of the risk to Higgins’ life.

“I’ve recently received really compelling evidence from medical experts that the ongoing trauma associated with this prosecution presents a significant and unacceptable risk for the life of the complainant,” Drumgold said on Friday.

Lehrmann was accused of raping Higgins in the office of their then-boss, Liberal minister Linda Reynolds, in Parliament House in the early hours of March 23, 2019, after a night out drinking with colleagues.

He faced one charge of sexual intercourse without consent. Lehrmann had denied ever having sex with Higgins and described himself as behaving like a “gentleman” on the night.

It is understood Lehrmann is contemplating civil remedies to redress his loss of reputation and employment.

The first trial was cut short on October 27 after 12 days of evidence and submissions in the ACT Supreme Court and five days of deliberations, because of juror misconduct.

Higgins said many people in the media had been called out for labelling the first trial the ‘Higgins trial’.

“But I don’t blame you, because to me, it is very obvious who has been on trial,” she said.

“In the ACT during 2020, only 16 per cent of sexual offences reported to police resulting in a charge. And of that 16 per cent – only half of that number again – resulted in a conviction. That is to our national shame.”

She thanked the prosecution team and the court for treating her with “care and respect” through the process and thanked her friends and supporters for helping her through.

“I want to thank the other women who came forward and shared their own experiences,” she said.

“Most importantly, I want to thank the workers in our mental healthcare system, without whom, I literally would not be here today.”

Higgins’ friend Emma Webster released a statement after the announcement on Friday, which said: “Brittany is in hospital getting the treatment and support she needs.

“The last couple of years have been difficult and unrelenting. While it’s disappointing the trial has ended this way, Brittany’s health and safety must always come first.”

Crisis support is available from Lifeline on 13 11 14.