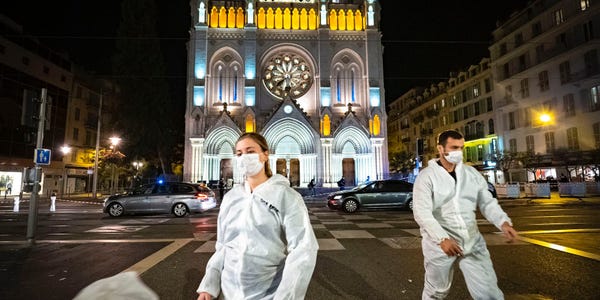 The man suspected of killing three people, including beheading a woman, in Nice, France, on Thursday was a 21-year old from Tunisia who arrived in Europe in late September.

Jean-Francois Ricard, France's anti-terrorism prosecutor, said that the suspect arrived on the Italian island of Lampedusa on September 20, The Associated Press reported.

Lampedusa is a common destination for migrants seeking entry to Europe, given the relatively small distance between the island and the coast of Tunisia.

Ricard said the suspect then arrived on in the Italian port city of Bari on October 9, before travelling to Paris.

According to the AP, security footage showed showed the suspect walking into the city's train station at 6:47 a.m. on the morning of the attack, where he changed his shoes and turned his coat inside out.

He then left and walked to the church just before 8.30 a.m., according to the AP.

Both Agence France-Presse and MailOnline the suspect as Brahim Aoussaoui.

Speaking from Nice on Thursday, he said that "Very clearly, it is France which is under attack."

Ricard said that the suspect was not known as a potential threat to intelligence agencies.

Two women and one man were killed in the attack.

Ricard said that two of the victims died inside the city's Notre Dame church.

He said that a 60-year-old woman suffered "a very deep throat slitting, like a decapitation" and a 55-year-old man had fatal throat wounds.

He said that a 44-year-old woman manged to move to a nearby cafe after she was injured, but she died there.

MailOnline identified her as Simone Barreto Silva, a mother of three children, and reported that her last words to paramedics were: "Tell my children that I love them."

The suspect was shot by police and is now in critical condition, the BBC reported.

Ricard said that the suspect also had a copy of the Quran, two phones, and a 12-inch knife on him, the AP reported.

Per the BBC, Ricard also said: "We also found a bag left by the attacker. Next to this bag were two knives that were not used in the attack."

The attack came amid rising tensions surrounding Islam in France.

The attack took place after a teacher, was decapitated in Paris on October 16 after he showed cartoons of the Prophet Muhammad published by Charlie Hebdo magazine.

A French counterterrorism source told Insider that the attacker shouted about cartoons on Thursday before the killings.

And a series of other attempted attacks took place on Thursday, though it is not clear if they are connected to the one in Nice.

A man with a knife was killed by the police in Avignon after reportedly threatening the police and shouting "Allahu akbar," and a man was arrested after attacking a security guard at the French Consulate in the Saudi Arabian city of Jeddah "with a sharp object", the Saudi government said.

Le Parisien reported also reported that man was arrested in Sartrouville, France, later on Thursday after reportedly telling his father he wanted to copy the Nice attack.

France moved to its highest attack alert level on Thursday.