Tasman Keith sounds like a performance name, a street name, or even a last throw at an Australian getting some traction in New Zealand. But for Tasman Keith, Gumbaynggirr man, rapper, Bowraville represent and Midnight Oil collaborator, it’s real and it’s connected.

“My name comes from my great uncle, Tasman Dotti. He was a Djangadi man and [Dotti] is one of the heritage lines, one of the main Djangadi last names way back,” says the rapper whose full name is Tasman Keith Jarrett. “I always knew I was named after him, but it wasn’t until recently, after I moved to Sydney, that I got a message from a lady in Campsie who is actually my cousin, and she said we found his unmarked grave in La Perouse. Then last year I went and saw him, visited the grave.” 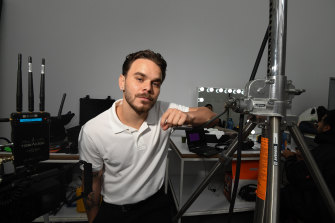 Tasman Keith during a break in shooting his latest video.Credit:Peter Rae

It obviously comes with value, being named after a respected elder – not to mention being the son of groundbreaking rapper Wire MC – as Keith prepares for the release of his debut album, A Colour Undone, but there’s some weight to carrying that name, to sustaining that connection.

“There was, there definitely was, until the most recent [time I] went back to my community and spoke to people and realised that all of this pressure or expectation that I’ve had of myself, either comes from the outside world or what I have put on myself, from wherever,” Keith says. “From the family? They just say do what you are doing and everything else will follow.”

And the best thing about having that connection and responsibility?

“Purpose. You get purpose in many different ways throughout life and this has given me purpose throughout my entire life.”

The flipside to this questioning is that this is how most respectful engagements with Keith go: questions about the past and traditions, about making a difference and taking responsibility. And he’s good with that: thoughtful, articulate and passionate, his album addresses issues like multi-generational trauma, mental health, and reclamation of pride, and there’s power and force, occasionally anger, behind some of those beats, too.

But as the musical and emotional variety of the album reflects a man with humour and wide musical tastes, you have to wonder if sometimes he might want to speak without speaking for, maybe not speak at all, or be light or fun, making mistakes without having to be representative of a community or, soon enough as his career expands overseas, a whole nation.

“Yeah, you definitely see throughout my career,” he says. “I tend to only speak on things when I think I really need to. Sometimes I just want to remain quiet for a second, or I want to figure out what I’m saying for myself before I can speak for others. And also it comes from sometimes I’ll just be chilling with the cousins [he laughs], talking shit, or it’s just humour, you know.”

Representing still matters, though. Keith has often said he wants to change the narrative around Bowraville on the NSW mid-north coast, perhaps best known for the unresolved death of three Indigenous children. Some of that change comes from the rest of us seeing its full society.

All that would come in handy when he was part of Midnight Oil’s The Makarrata Project, in which the veteran activist band combined with Indigenous artists on a suite of new songs and live shows to highlight and agitate for an Indigenous Voice to parliament.

While the Oils’ audience is a little more polite than in its rowdy past, it was still an occasion where a “gerroff, we want Oils” chant might have been expected. Keith expected it. But in the Enmore Theatre, for example, the reception was open and the reaction to his performance was positive.

“I always knew and I always wanted to cross generations with my music, but I think that was when I thought, I can do this and I don’t have to hold anything back.”

Tasman Keith’s A Colour Undone is out on July 8.