Billions may have been spent to rescue the country from the impacts of COVID-19, but there's one area where politicians have really tightened their belts this year: their own movements.

Federal MPs' expenditure on travel and related transport was nearly a quarter of what it was last year over the six months from April to September, saving taxpayers millions as politicians were forced to govern from home. 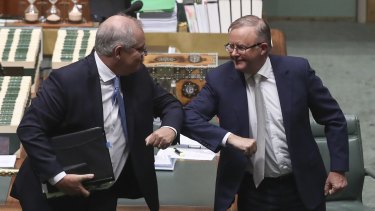 The Sun-Herald analysed reports from the Independent Parliamentary Expenses Authority to compare MPs' and staff travel expenditure in the second and third quarters of 2019 and 2020.

After spending more than $2 million on domestic airfares in each of the second and third quarters of last year, MPs spent just $98,071 in quarter two and $193,023 in quarter three flying around the country this year.

Staff travel costs were down 75 per cent – from a total of $8-9 million each quarter last year to $2 million in both the June and September quarters this year. The costs are so high because MPs (and particularly ministers) typically have a bevy of staff who follow them to and from Canberra.

In the September quarter of last year, MPs spent $360,564 of public money on family reunion travel for their spouses and children. This year, the figure for that quarter was just $1984 (it was especially low because Labor’s Tony Burke repaid $8600 for family flights from eight years ago).

Politicians also spent significantly less than last year on car travel, including the luxury COMCAR service and private-plated vehicles paid for by taxpayers. They spent about $2 million on cars over the six months to September, compared to $3.5 million in the same period last year.

Overall, MPs and their staff spent about $4.5 million on travel in each quarter this year compared to $15.3 million in each quarter last year (the second quarter of 2019 included a federal election).

University of Queensland professor Graeme Orr, who specialises in electoral and political law, said every enterprise had enjoyed savings and some benefits from "Zooming" in 2020, demonstrating travel was not always necessary. "There are plenty of MPs who don't enjoy travelling, especially those from the west [Western Australia]," he said.

But there were clear upsides to politicians, lobbyists and interest groups meeting and mixing in Canberra. "Just sitting in your office Zooming to people you already know or who have access to you makes it an even tighter bubble," he said.

While some elements of remote working would linger, Professor Orr said it was likely MPs and ministers would resume regular travel for meetings, events and community functions.

"I can't imagine the National Party or regional politicians thinking it's right that they stay stuck in one corner of a very large electorate," he said.

And just because more business is being done virtually does not necessarily mean it's cheaper. In September, Nationals MP Barnaby Joyce charged taxpayers $22,000 for video equipment, including $4500 for a digital video camera, $11,000 for a high definition transmitter, $3450 for camera accessories and $3000 for a data pack.