Stephen King’s stories often have a lived-in quality, perhaps because we have seen so many adapted for the screen. If I write “New England setting, boy who wants to be a writer, narration” you can quickly conjure a picture in your mind, and an expectation that something nasty this way comes. 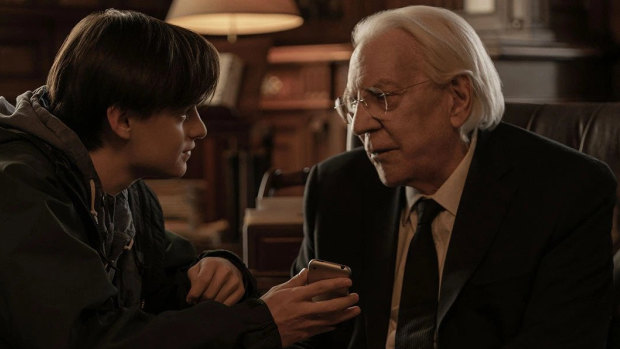 In this case, it’s more of a nasty effect. This is a story about good people, one of whom discovers that he can affect the wellbeing of people he does not like. A story about power, then – but we arrive by a circuitous and enjoyable route, as you would expect from King. The director here is John Lee Hancock, a Texan with a liking for stories that interrogate the American heartland. He made The Blind Side, The Highwaymen and The Founder.

In a pretty New England town, Craig and his father (Joe Tippett) are still grieving the loss of Craig’s mother. The reclusive town millionaire, Mr Harrigan (Donald Sutherland) offers the boy a job. Craig (Colin O’Brien) reads to the old man three times a week, at his creaking Gothic mansion. They read the classics, even the contentious ones like Lady Chatterley’s Lover. King wants us to remember that many good books remain banned in some American high schools.

Over five years, man and boy become close. Mr Harrigan dispenses cynical life lessons, such as that when someone tries to do you down, dispatch them without mercy. It’s like life-coaching from Ebenezer Scrooge. That evocation of Dickens is deliberate. This is a modern Dickensian tale of mystery and regret, married to a post-Trump sense of outrage.

By the age of 16, Craig (now played by Jaeden Martell, who looks like Daniel Radcliffe) has become worldly. He gives Mr Harrigan an iPhone, to show his gratitude. The old man scoffs at the new invention, until he sees that he can watch stock prices in real time. Mr Harrigan predicts the device will kill newspapers and destroy the idea of trusted sources. Fake news will rise.

The story then shifts gear in a way that’s not completely smooth, as Craig learns the dead sometimes communicate with the living. Craig realises he can influence what happens to people.

Some may not go with this veering plot, but those who love Stephen King will enjoy the leap into speculative fiction. It’s what made him famous – that ability to see how a little dark fantasy can illuminate the world. Hancock keeps mining King’s story for its broad swathe of ideas. That’s so rare in a mainstream film of late. Ideas are dangerous, as we all know. Films can burn just as well as books.