Angelina Jolie, 47, is seen with her daughter Zahara, 17, in rainy New York City… after the teen started college in Georgia two months ago

Angelina Jolie was spotted out in a rainy New York City with her daughter Zahara Jolie-Pitt on Tuesday morning.

The 47-year-old activist bundled up in a warm, black coat as she braced the inclement weather with Zahara, 17. The mother-of-six let the teenager walk in front of her as she followed closely behind.

This comes two months after the actress dropped the teen off at Spelman College in Georgia. Zahara is likely enjoying a quick break with mom in Manhattan. 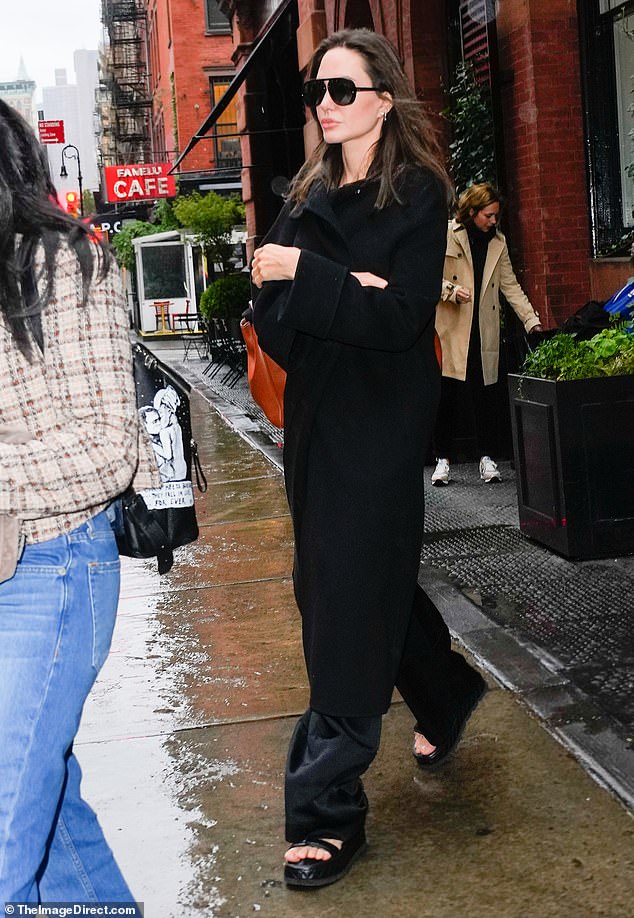 Wet day: Angelina Jolie was spotted out in a rainy New York City with her daughter Zahara Jolie-Pitt on Tuesday morning

The Tomb Raider star looked glamorous as she sported a pair of onyx black aviator sunglasses, despite the lack of sunshine.

Underneath the frames her face was fully made up, with her cheeks dusted in a soft pink hue, coordinating with her lipstick.

Angelina, who was married to Brad Pitt for five years before legally divorcing in 2019, looked typically svelte and stylish. 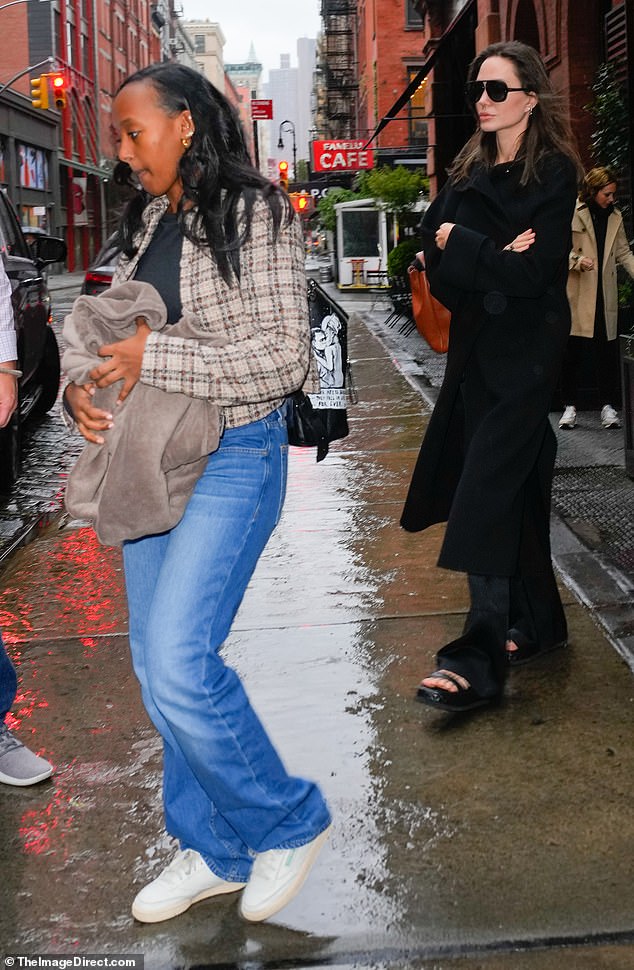 Mom and daughter: The 47-year-old activist bundled up in a warm, black coat as she braced the inclement weather with Zahara, 17

Meanwhile, Zahara was more casual and colorful in light wash blue jeans and a pair of cream-colored Reebok sneakers.

She wore a textured, cream and brown patterned jacket over a crew neck black t-shirt and carried an oatmeal-hued blanket.

Her hair was glossy and voluminous, styled in a side part and tucked behind her ear as the strands fell over her shoulders in loose curls.

Jolie-Pitt wore multiple earrings and carried a black leather backpack with a white graphic print over her shoulder. 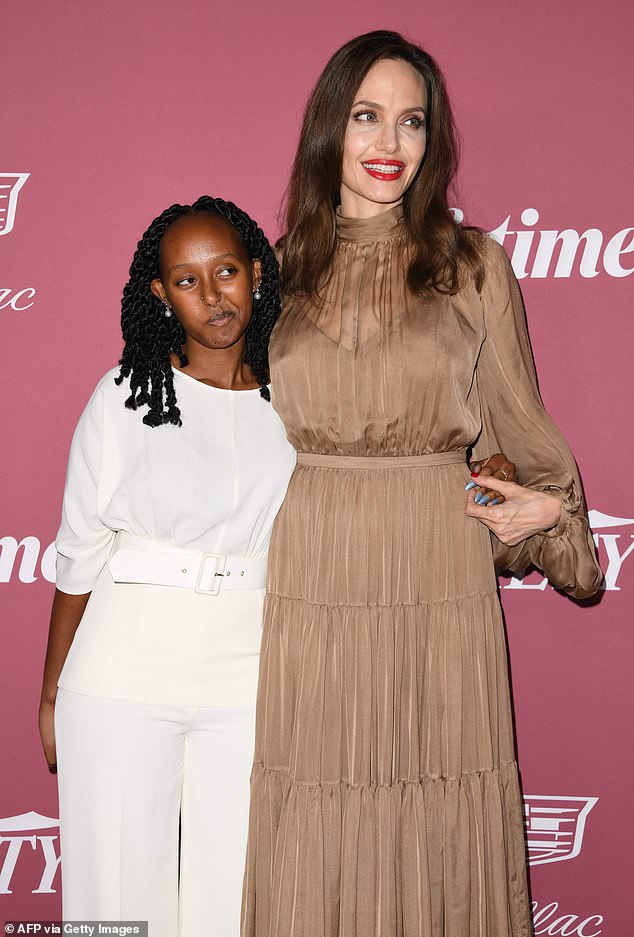 Close: The Manhattan sighting comes two months after Zahara, who was born in Ethiopia, enrolled at  Spelman College in Georgia. Mom and daughter are pictured in LA in 2021 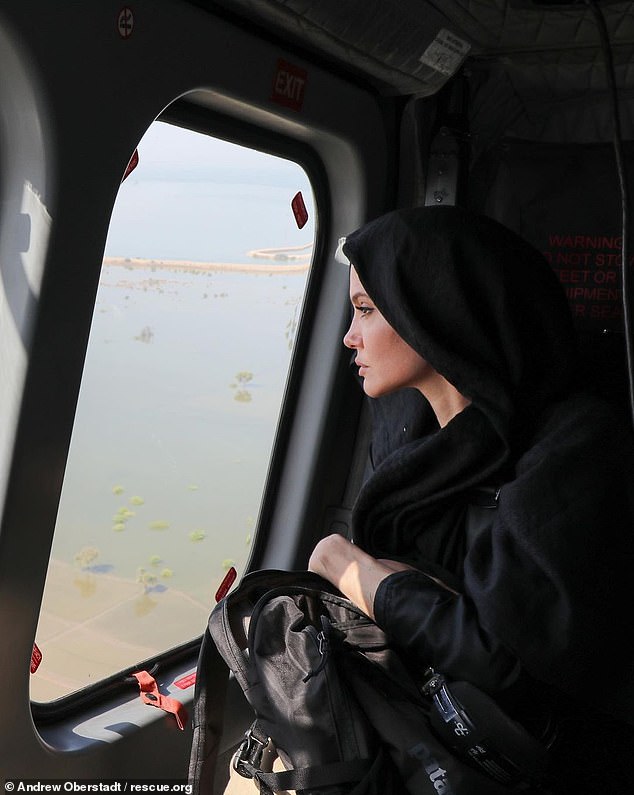 A humanitarian effort: Jolie visited Pakistan to support flood victims in the wake of the storm’s devastation; seen in images shared last week

Angelina visited Pakistan to support flood victims in the wake of the storm’s devastation, taking to social media afterward to share her findings.

‘Last week I was in Pakistan with the local organizations, to witness the devastation caused by severe flooding which submerged 1/3 of the country’s land,’ the United Nations High Commissioner for Refugees (UNHCR) ambassador penned.

‘I’ve never seen anything like this and I have been to Pakistan many times,’ she wrote to her audience of millions.

‘I am absolutely with you in pushing the international community to do more. I feel that we say that often… we speak of aid appeals, relief and support but this is something very, very different.’

She concluded, ‘Push governments to understand that lack of fair trade, rising emissions and failure to address conflicts are causing more death and suffering to millions of families around the world.’

‘I think this is a real wake-up call to the world about where we are at,’ she told a meeting of civil and military officials in the capital Islamabad. 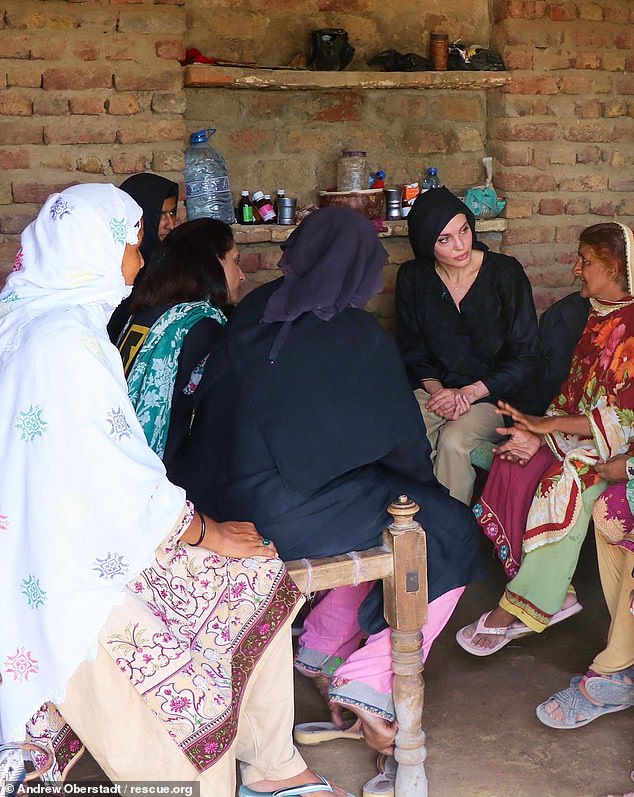 Speaking with the victims: ‘I’ve never seen anything like this and I have been to Pakistan many times,’ she shared