Feeling herself! Kim Kardashian stepped out with a fresh look less than one week after finalizing her divorce from Kanye West.

Atomic Blonde! Every Time Kim K. Has Delivered Drama With Her Platinum Hair

The Kardashians star, 41, rocked a brand new ‘do at the Art Basel event in Miami on Thursday, December 1, toning down her platinum locks for a honey-blonde shade instead. Wearing her tresses down in loose waves, the Skims founder paired her new mane with blue and white baggy pants, a black custom VEX Latex bandeau and matching sunnies. On her feet, she sported a pair of knee-high boots.

Kardashian initially dyed her hair blonde for the Met Gala in May, donning her newly-colored crown in a slicked-back bun and letting her vintage Bob Mackie gown— which Marilyn Monroe famously wore when she serenaded President John F. Kennedy on his 45th birthday in 1962 — pop.

According to hairstylist Chris Appleton, the crystal-covered gown was the perfect compliment to the Selfish author’s bleached hair as it came in a champagne-colored hue.

“The hair look was simple to highlight the platinum color, giving the hair color and dress the attention,” he told Vogue at the time. “I wanted it to be iconic to Marilyn, but also iconic to Kim when she has her blonde moment.”

Kardashian revealed during sister Kylie Jenner’s Married to the Met video that the dye job took “14 hours” and she was so committed to the transformation that she’d “risk getting my hair to fall out.” While walking the event’s red carpet, the KKW Beauty founder confirmed that she’d be channeling Marilyn for the foreseeable future. “I’m excited to stay blonde for a while,” she gushed. 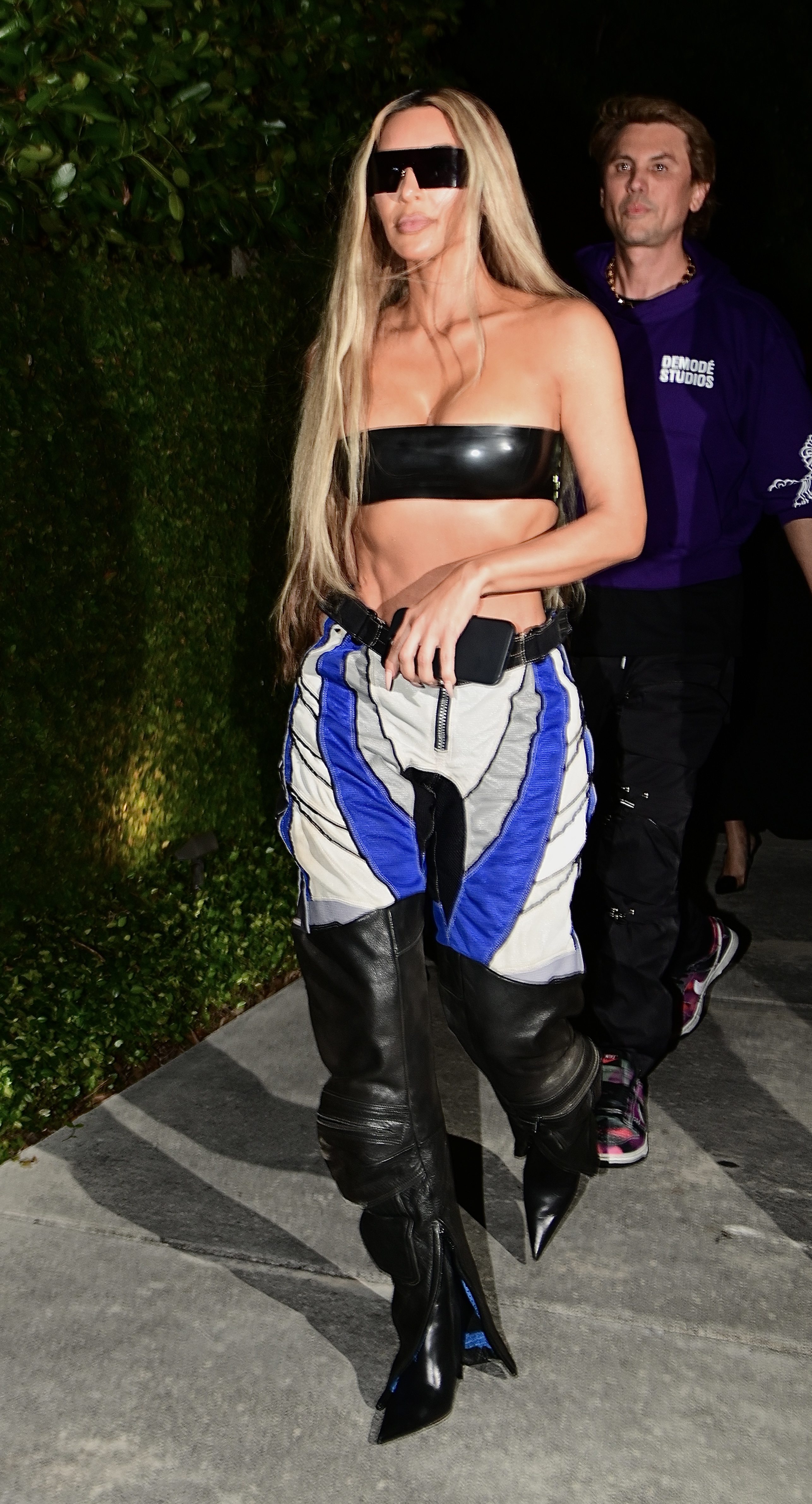 While the Hulu personality is known for changing her tresses on the regular, Kardashian hasn’t had to deal with grey hairs. “I have not gone gray yet — I haven’t had gray hair yet,” she said during a September appearance on Live With Kelly and Ryan, to which cohost Kelly Ripa replied, “You’re probably not going to. It’s not like your life isn’t stressful. If one were to go gray, it would have happened to you by now. You’re free and clear.”

Part of Kardashian’s stress can likely be contributed to her lengthy divorce from West, 45, which was finalized on Tuesday, November 29. The pair, who share kids North, 9, Saint, 6, Chicago, 4, and Psalm, 3, were married for nearly seven years before calling it quits in February 2021.

Per documents obtained by Us Weekly on Tuesday, the exes agreed to joint physical and legal custody with “equal access” to their four children. The Grammy winner will pay his ex-wife $200,000 a month for child support and is responsible for 50 percent of the kids’ educational and security expenses.

More Fun? Celebs Who Have Traded Their Brunette Hair for Blonde

The duo divided their property in accordance with their prenuptial agreement, which also stated that they waived spousal support.

Since their split, the twosome have been open about their relationship woes. Last week, Rolling Stone published a report revealing that Yeezy employees had written an open letter to Adidas accusing West of mistreatment in the office and inappropriate actions toward staffers, and alleged that West previously showed naked pictures of his then-wife to people at the company.

On Friday, a source exclusively told Us that Kardashian was “disgusted” by the claims and is trying to “see what photos the former employees saw” in order to “confirm” the allegations.

“She feels violated and horrified,” the insider added at the time.

Kim Kardashian and Kanye West: The Way They Were

In April, the beauty mogul revealed that the pair were “off and on” during their breakup and got candid about the challenges of coparenting with the “Heartless” artist.

“You know, we went about eight months without even speaking to each other at the beginning of the divorce,” Kardashian said on the “Not Skinny But Not Fat” podcast in April. “I mean, he would still see the kids and stuff. Him and I just took a minute of not talking.”