Putin’s next three moves in Ukraine… but he’s running out of time: War expert JUSTIN BRONK says Russian ruler is in a ‘dangerous position’ but his BIGGEST difficulty is ‘selling his disastrous war as a victory to his own people’

Ukraine has to sustain the ability of its forces to continue fighting effectively and counterattacking to regain lost territory if it is to hold out against the Russians, military expert JUSTIN BRONK writes on MailOnline today.

President Volodymyr Zelensky’s troops are mobilising new Ukrainian forces in the west with modern weapons provided by Western countries and these could be sent to reinforce Odessa or Kyiv rapidly if needed.

Mr Bronk, a leading military expert in airpower and technology, added that Ukraine must sustain morale of its troops and citizens and ensure Western military and other assistance continues to flow into the country.

He added that Russian forces are in a ‘dangerous position’ which is likely to deteriorate in the coming weeks without a major pause in fighting – meaning that it is vital that the Ukrainians continue to battle hard.

In contrast, Mr Bronk said the Russians are likely to attempt three options – one of them being driving northwards from Melitopol towards Dnipro to meet with a thrust southward from Kharkiv at the same time.

The second is that the Russians will continue bombardments of Mariupol, Kharkiv and other smaller cities – while the third is that they will carry on attempting to encircle and bypass Mkyolaiv in the south.

He also said parts of Ukraine are ‘now beyond Russia’s capacity to influence or “regain” forever’, adding: ‘Putin now needs his forces to achieve something he can sell to his own people as a victory worth these huge costs.’

Here is the full analysis by Mr Bronk, a research fellow at the Royal United Services Institute in London: 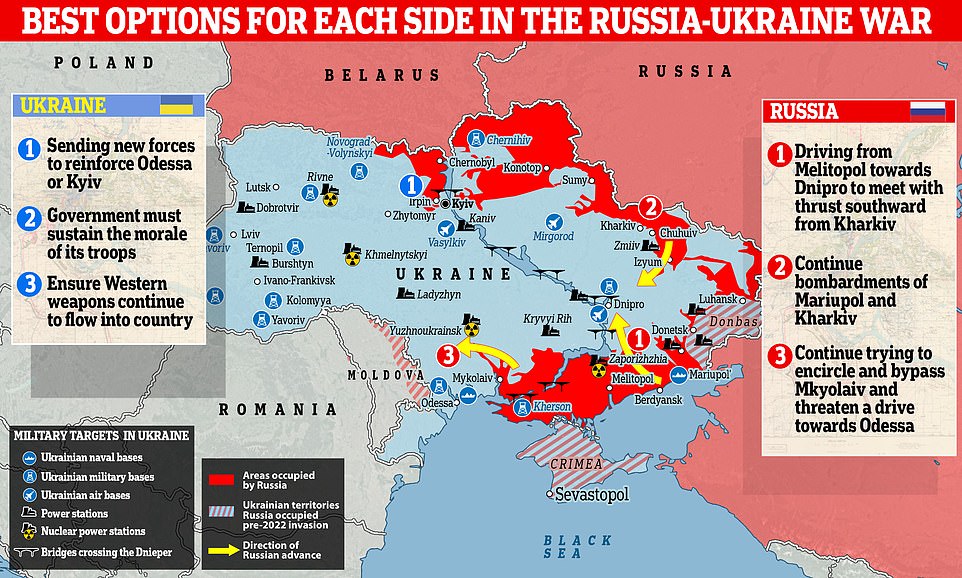 By JUSTIN BRONK FOR MAILONLINE

Russia invaded Ukraine on February 24, 2022 with a clear intent to decapitate the Ukrainian state at both the national and local level, capture key cities and infrastructure, and presumably put a compliant pro-Russian client government in place to facilitate Ukraine’s de-facto absorption into a ‘greater Russia’ alongside Belarus.

That failure has so far cost the Russian Army 5,000 to 8,000 troops killed in action, with probably three to four times that many wounded, captured or missing, along with at least 1,350 vehicles, heavy weapons and aircraft destroyed or captured.

There is significantly less clarity on Ukrainian military losses, but they are also likely to be in the low thousands due to the heavy Russian use of artillery and other heavy firepower on all their axes of advance.

Nevertheless, after three weeks of fighting, the initial Russian aims of overthrowing the Ukrainian government in Kyiv and setting up a client state in its place are no longer achievable.

The Russian Army has struggled to make progress in the muddy terrain in the north and north east of Ukraine since the invasion began. It has so far failed to completely encircle and cut off either Kyiv or Kharkiv. 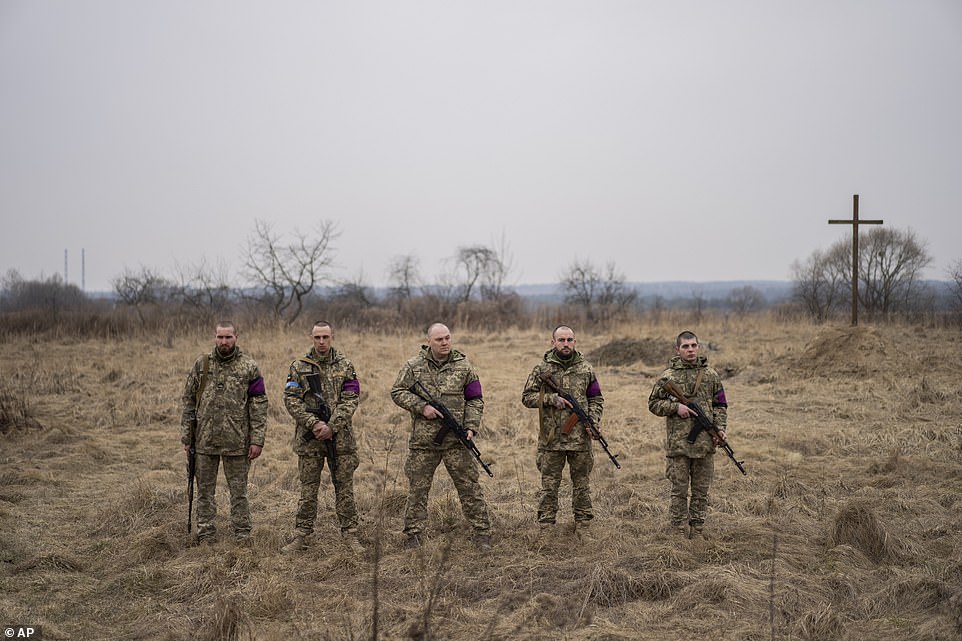 Ukrainian military servicemen prepare to fire salutes during the funeral of their comrades yesterday in Starychi, Ukraine 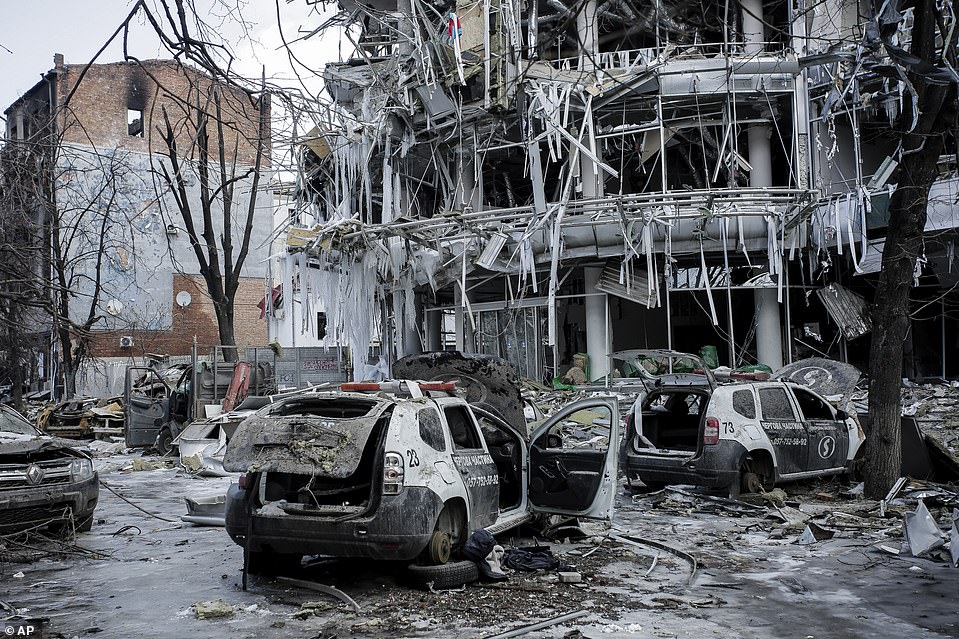 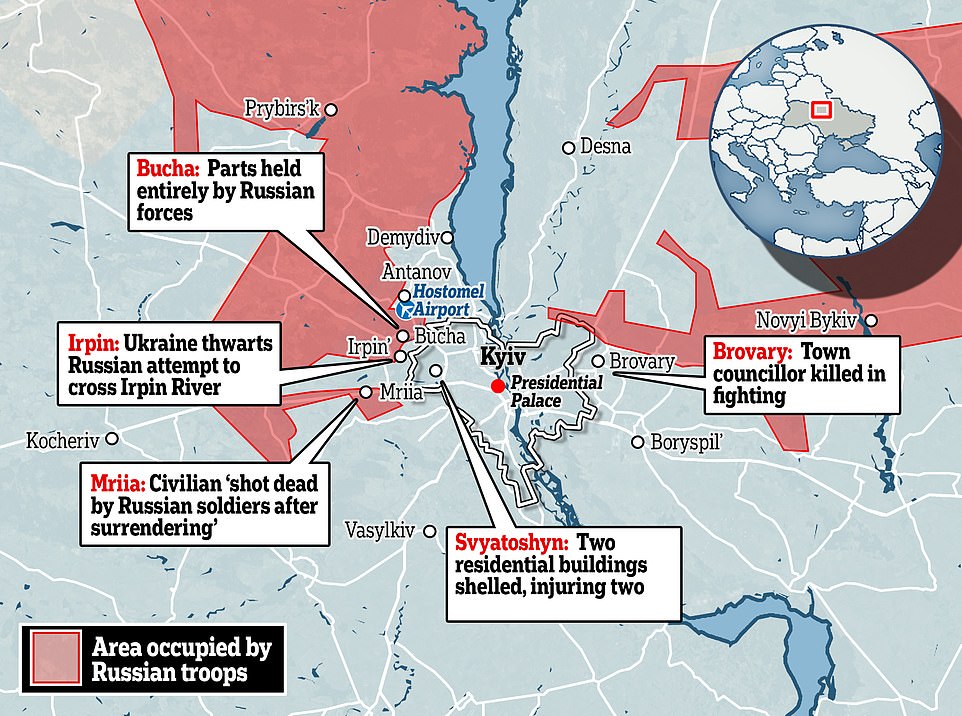 Ukraine has conducted successful counterattacks at Chernihiv and Irpin near Kyiv, and also successfully held open resupply corridors into both Kyiv itself and Kharkiv to the north east near the Russian border.

Here’s how YOU can help: Donate here to the Mail Force Ukraine Appeal

Calling upon that human spirit, we are supporting a huge push to raise money for refugees from Ukraine.

For, surely, no one can fail to be moved by the heartbreaking images and stories of families – mostly women, children, the infirm and elderly – fleeing from the bombs and guns.

As this tally of misery increases over the coming days and months, these innocent victims of this conflict will require accommodation, schools and medical support.

Donations to the Mail Force Ukraine Appeal will be used to help charities and aid organisations providing such essential services.

TO MAKE A DONATION VIA TEXT

TO MAKE A DONATION VIA PHONE

Call 0300 12345 77 and follow the instructions to make your donation. A small fee will be deducted by the payment processing platforms when you pay by debit or credit card.

It is increasingly clear that the Russian Army may struggle to assemble sufficient combat power to actually take Kharkiv, let alone Kyiv.

In addition to the losses already suffered, its resupply convoys are under consistent attack by Ukrainian light infantry. Kharkiv, Sumy and Chernihiv are under heavy bombardment, but the limited Russian efforts to actually storm besieged cities and towns in the north have been costly and largely unsuccessful.

Part of the reason for this is that the Russian Air Force has failed to gain air superiority over most of Ukraine, despite having hundreds of modern fast jets and helicopter gunships.

Consequently, its aircraft are having to operate largely at low altitudes where SAM systems are less effective, dropping unguided bombs and rockets with limited accuracy.

At these low altitudes, they are taking consistent losses to shoulder-fired anti-aircraft Stinger and Igla missiles by day, which in turn is making them operate at night where they struggle to identify battlefield targets.

Things have gone better for Russian forces in the South of Ukraine, where the terrain is more open and the ground firmer – allowing Russian forces to manoeuvre more effectively off-road.

The bulk of the Ukrainian regular Army was deployed along the Donbas line of contact in the east of the country at the start of the invasion.

These units have been largely unable to break contact to reinforce other areas due to heavy attacks by separatist and Russian forces from the east.

With most other units stationed in the north and north-east to defend against attacks on Kyiv and Kharkiv, the south of Ukraine was always lightly defended.

As a result, Russian forces captured the cities of Kherson and Melitopol in the first few days of the invasion, and also rapidly encircled the key port city of Mariupol.

However, despite its advantages in the south, the Russian Army has so far failed to capture Mariupol after weeks of intense bombardments of the city. It has also failed to capture the smaller city of Mykoliav to the north-east of Kherson.

Russia has suffered crippling financial damage from the unprecedented sanctions imposed by NATO, the EU and many other nations including Switzerland and Israel.

It has burned carefully cultivated influence networks, destroyed its remaining soft power and global reputation. Russia is now largely cut off from global air travel and even many large shipping networks.

Meanwhile its army is taking losses in Ukraine which are fundamentally unsustainable if they continue over more than a month or two. In return, it has captured limited amounts of territory in the north, east and south of Ukraine, but has only taken one major city (Kherson) and a few smaller ones such as Melitopol.

The other cities it has encircled such as Mariupol, Kharkiv and Sumy have already badly damaged or destroyed by weeks of bombardments and fighting.

Even if Russian troops eventually succeed in forcing them to surrender, they will be left attempting to control a partially armed population which is now united as never before by an intense hatred of Russia.

Meanwhile the rest of Ukraine is now beyond Russia’s capacity to influence or ‘regain’ forever. Putin now needs his forces to achieve something he can sell to his own people as a victory worth these huge costs. 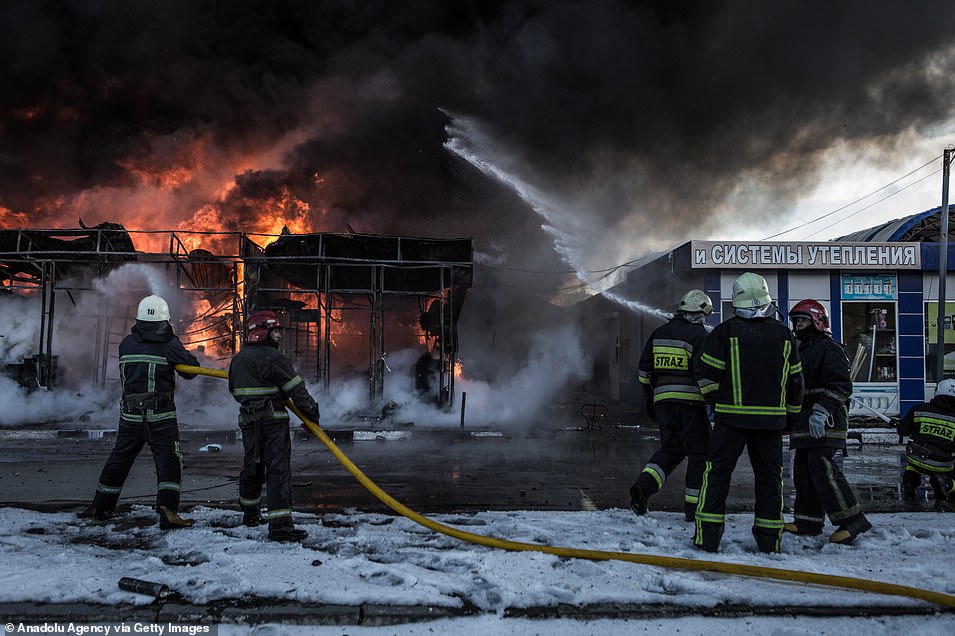 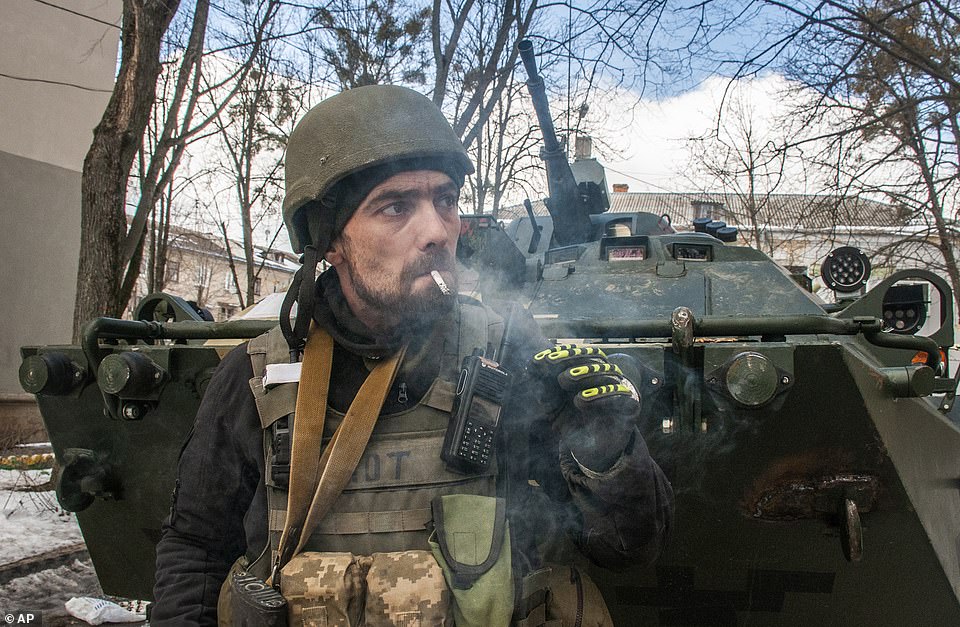 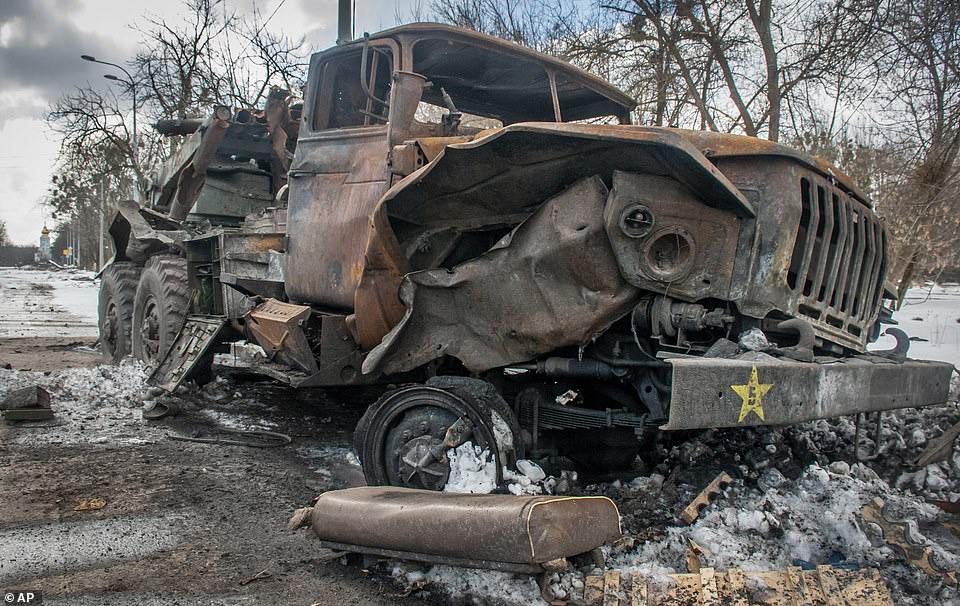 In this context, Russian forces are likely to attempt three things.

Firstly, they will attempt to weaken Ukraine’s ability to continue the fighting at its current intensity by driving northwards from Melitopol towards Dnipro to meet with a simultaneous thrust southward from Kharkiv.

If this is successful then the bulk of Ukraine’s regular army units in Donbas will be cut off and isolated from the rest of the country.

Secondly, the Russians will continue the brutal and indiscriminate bombardments of Mariupol, Kharkiv and other smaller cities.

The suffering of their remaining inhabitants and defenders being used to pressure the Ukrainian government to agree a ceasefire on terms which would allow Russian forces to pause, consolidate their gains and rotate those units which have been most badly mauled.

Thirdly, Russian forces will continue attempting to encircle and bypass Mkyolaiv in the south so that they can threaten a drive towards Ukraine’s remaining south-western port city of Odessa.

A Russian Navy task force that has been waiting off Odessa for weeks has conducted shelling of the city in recent days and might attempt an amphibious assault if friendly ground forces can get close enough. 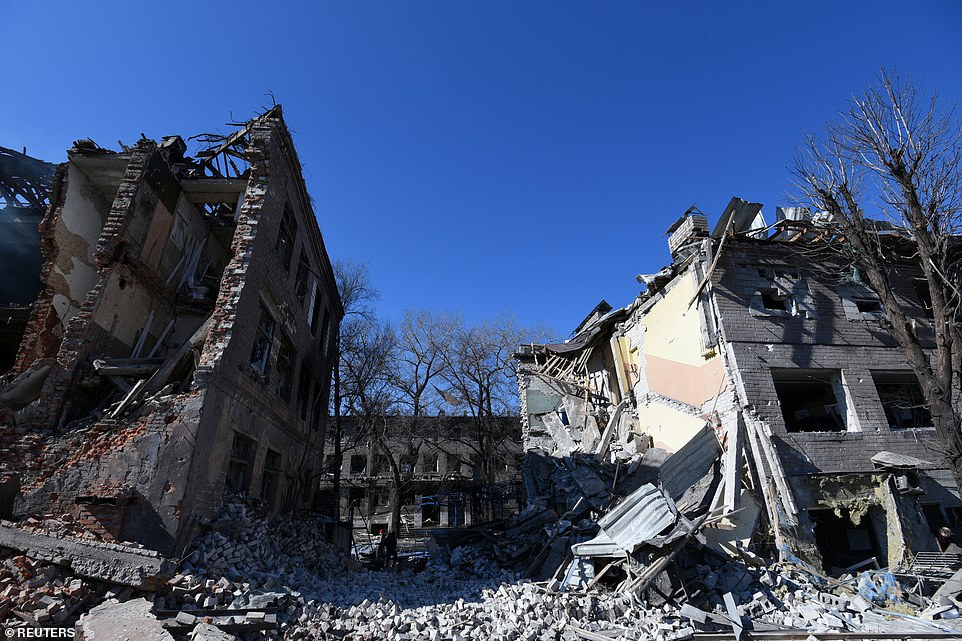 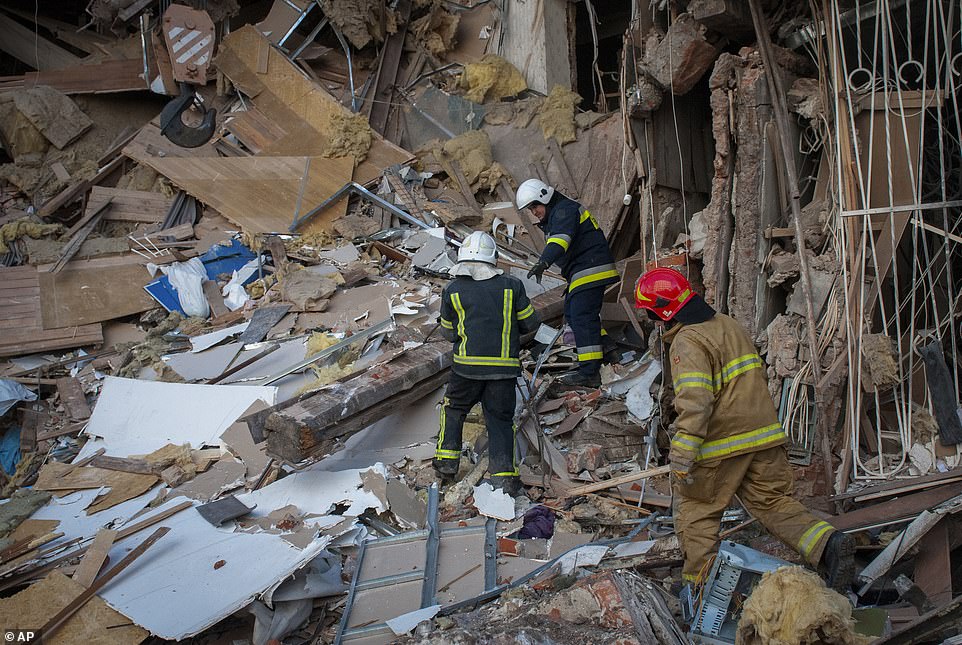 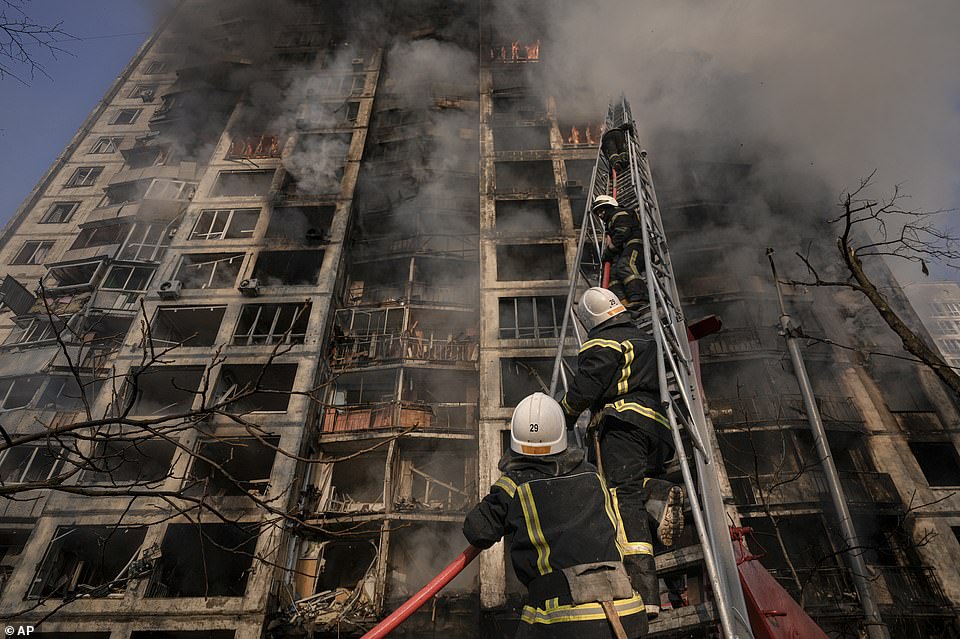 Meanwhile, the attempts to encircle Kyiv will continue and the city is likely to come under increased bombardment, but is highly unlikely to fall to direct assault. 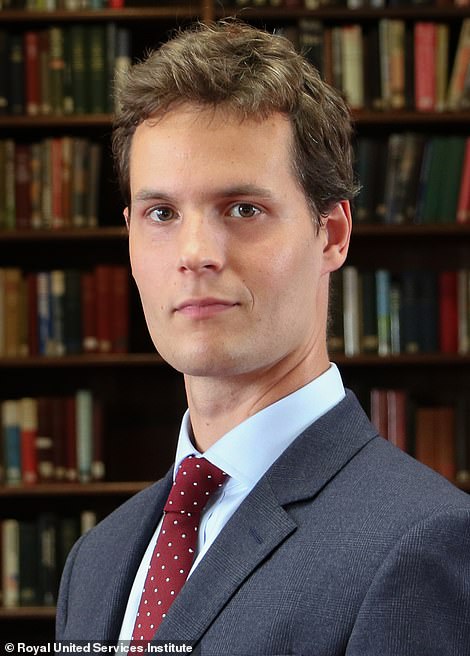 For the Ukrainian government, the focus will be on sustaining the ability of its forces to continue fighting effectively, and counterattacking to regain lost territory where possible.

In the west of Ukraine, new forces are being rapidly mobilised, trained and equipped with modern weapons provided by Western countries.

These will need time to reach a high level of combat effectiveness, but could be sent to reinforce Odessa or Kyiv fairly rapidly if needed.

In the meantime, the government must sustain the morale of its troops and citizens, and make sure Western military and other assistance continues to flow into the country.

Russian forces are in a dangerous position, and one that is only likely to deteriorate over the coming weeks without a major pause in the fighting.

However, the risk is that continuing Ukrainian civilian casualties or any major military setbacks in the east or south might force the government in Kyiv to accept ceasefire terms that would give Russian forces that pause, without forcing them to retreat from the territory they have stolen.

By contrast, if Ukraine can continue to fight in the coming weeks, the Russian military and political position will look increasingly disastrous.