On the witch scale, Room on the Broom's main character is more Glinda than Maleficent.

"She's a really lovely witch," says actor Cally Castell, who has played the lead role in the children's show since March last year. "She's not that good at casting spells, she's a bit clumsy, but she has a caring heart. Definitely not a bad witch." 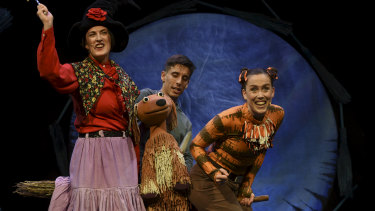 Cally Castell, Ryan Dulieu and Katie Burson in Room on the Broom.Credit:Heidrun Lohr

The stage adaptation of Julia Donaldson's popular picture book plays until January 23 as part of The Chatswood Family Festival on The Concourse. The show follows a kind witch and her cat as they make some animal pals before encountering a fearsome dragon, in a story all about friendship and teamwork. While the book is only 24 pages long, it has been transformed into a 55-minute show.

"There's obviously a lot more than in the book or the show would be about five minutes long!" says Castell. "We really just expand upon what's already there in the book with lots of music and jokes and magic and silliness."

Room on the Broom also boasts some spectacular puppetry for the characters of the dog, frog and bird. Castell admits even as an adult she is surprised by how real they can seem. "I forget all the time. You would think that it would be odd acting with a puppet, but they are so alive."

While the show is for ages three and up Castell says even the youngest audience members stay transfixed courtesy of Donaldson's genius for gently funny tales.

"Her writing really sparks the imagination. It's written so beautifully and she manages to fit quite a lot of action into very few words. Kids love going into this whole other world."

Room on the Broom, 10am and noon, The Concourse, 409 Victoria Avenue, Chatswood, $39,
theconcourse.com.au.