What a wild night! Using the very latest night-vision technology, a new series reveals what animals get up to after dark – and there are some jaw-dropping surprises

You’ll never complain about next door’s cat sneaking into your garden again.

Video cameras capable of filming in crystal-clear clarity under dim moonlight have captured an extraordinary sight in a town in southern Africa… elephants that visit suburban back yards by night to munch the greenery.

This spectacle, never recorded before, takes place in a stretch of new urban sprawl on the border of Botswana and Zimbabwe.

A highway snakes through the town, alongside a railway track. As the development sprang up, no one worried about the elephants that file past several times a year, following ancient migration routes. 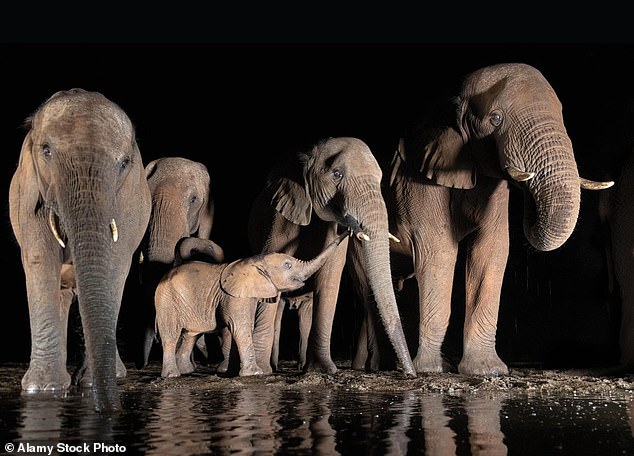 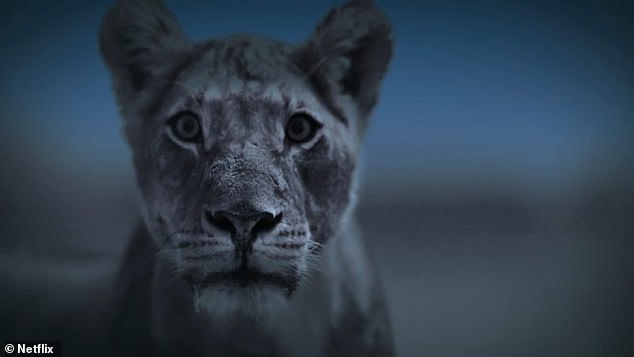 The Netflix crew follows a trio of young lions honing their skills. They are able to slink unseen around a herd of half-asleep zebra. Pictured, one lion gets too close to the crew for comfort

The chill of the cold shoulder 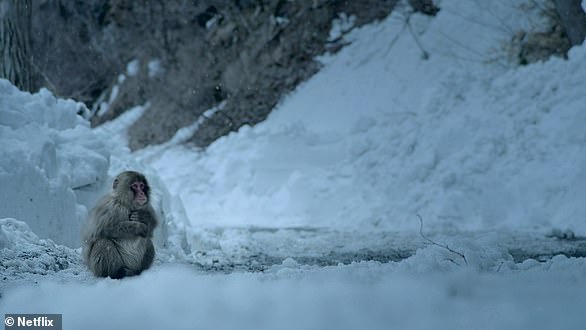 Japanese macaques follow a complex social hierarchy. The most privileged lounge in the hot springs (below) – which, in winter, is highly desirable since the water can be some 50°C hotter than the sub-zero air and the snow around the pool. But for a low-caste macaque, life is hard. During the day, the crew find one chap who isn’t allowed to dip even a toe in the water. The poor fellow sits and shivers, his face a picture of monkey misery (above). What the night-time cameras reveal is that his ostracism continues after dark. While the high-class macaques huddle together on a branch, the outcast suffers alone. But it can drop to -20°C overnight, meaning his life is in danger. Persistently, he tries to join the group to share their warmth, and as the temperature plummets, they finally let him. No one gets frozen out when it’s that cold. 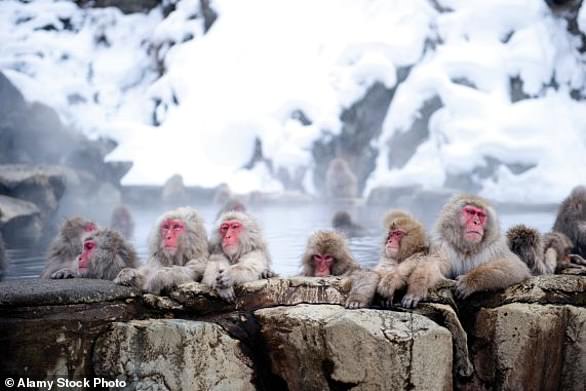 But elephants don’t think like that. Instead of making a detour, they stick to their path… and march through town.

Stubborn they may be, but elephants aren’t stupid. Crossing busy roads and railway lines by day is dangerous.

At night, however, it’s safer. And at that time, too, most of the humans are asleep – leaving gardens, with their tasty hedges, unguarded.

The scene is shown for the first time in a new documentary series made for Netflix, Night On Earth. 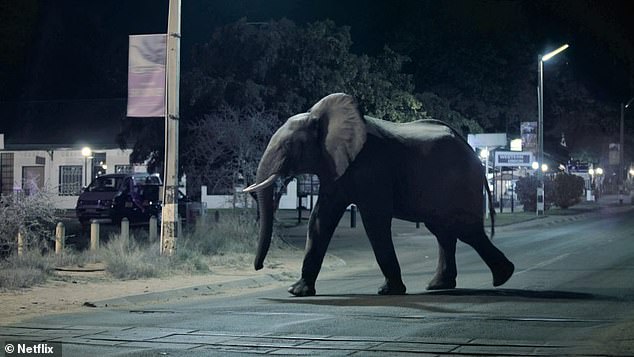 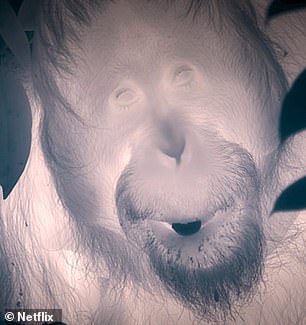 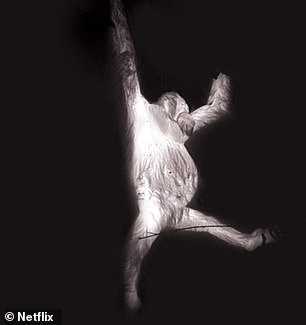 The series features never-before-seen footage of an orangutan grabbing a midnight feast in a fig tree in Borneo, as pictured left and right. It was unusual as orangutans are not nocturnal 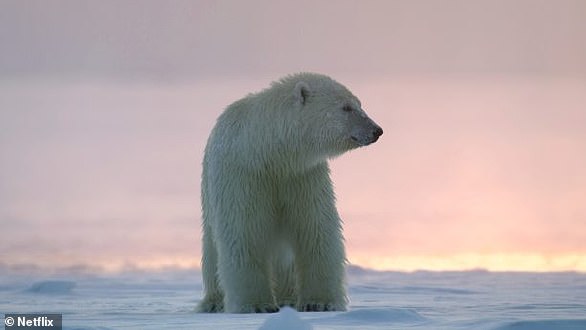 Polar bears are reluctant night-time hunters. Yet as the sea-ice retreats in summer on the Norwegian archipelago of Svalbard and they face months without being able to hunt seals, these giant carnivores are willing to search for food at any hour. The low-light cameras follow a mother and her two adolescent cubs, who lack the experience and guile to find their own dinner. Mum’s technique is to pad softly towards a ringed seal (below), being careful to stay upwind so her scent doesn’t give her away, and then to seize her prey by its tail as it tries to dive through an icehole into the sea. Her boys can’t grasp the trick. Fed up and frustrated, one follows the smell of fresh meat over the ice (top) and sees an older adult tucking in to a kill. The youngster tries to steal the remains – and is overpowered by the bigger bear. It looks as though he’ll be seriously injured… but Mum comes galloping to the rescue. 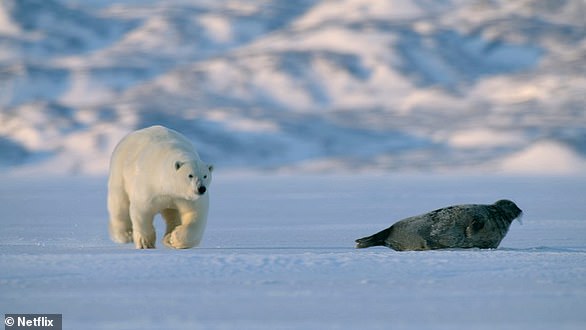 ‘We complain about foxes foraging in our dustbins, but can you imagine looking out and seeing an elephant on the flower bed?’ says producer Bill Markham, who’s previously worked for the BBC’s Natural History Unit.

His favourite moment is when two little girls peep out from behind the curtains. ‘They look like children in a Roald Dahl story, wide-eyed to see the Big Friendly Giant.’

Netflix had only one stipulation for Bill and the other makers of this show: it had to be crammed with sights viewers had never witnessed before.

Often the crew went even better than that, filming behaviour even scientists had never seen.

One of the most striking examples is shot in Borneo at midnight, in a fruiting fig tree.

All the usual suspects, including bats and birds, have come to feast, but then they’re joined by someone unexpected – a young male orangutan, swinging through the branches.

‘No one can tell me what an orangutan was doing up and about at midnight,’ Bill says.

‘They are not nocturnal – they make a nest every night in the treetops, weaving a bed from leaves. To see this one popping in for a midnight snack was a revelation.’ 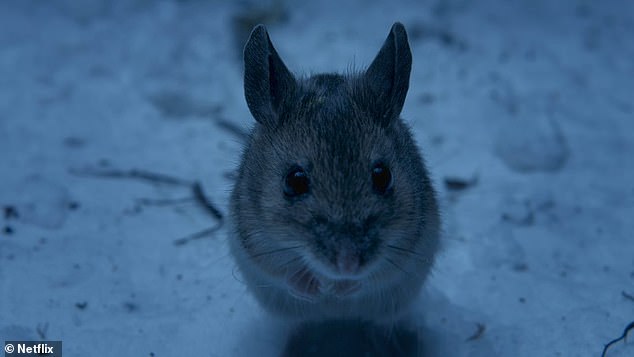 This wood mouse finds a very unusual lodging in Siberia. She’s hunting for a warm crevice in which to give birth and finds one at the foot of a tree – but it’s already taken by honey bees

Trick or treat for this moose 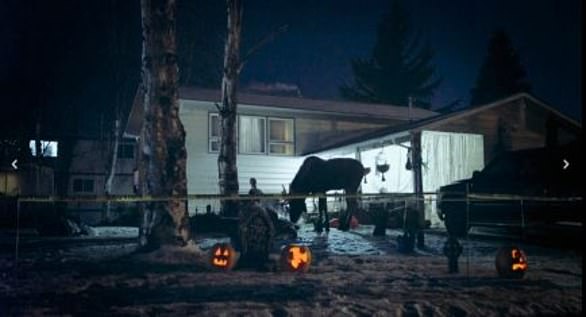 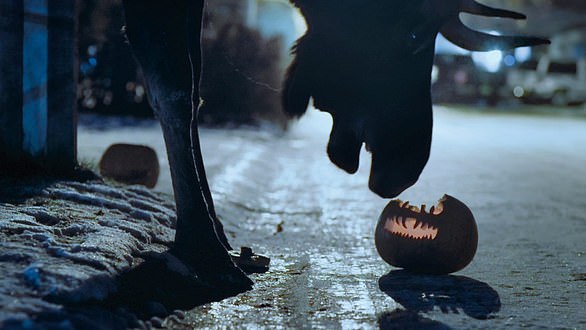 Halloween is a great American tradition, and one great American animal approves. In Anchorage, Alaska, when families put carved pumpkins in their gardens, herds of moose are drawn to the streets after dark. While the children go trick-or-treating, the big deer are also doing the rounds… eating the pumpkins. Lit candles may be inside, but the moose don’t mind singeing their noses for a free meal (above). Human food left lying around attracts other animals. CCTV cameras spot a black bear in a US town, wheeling a bin down the street to somewhere private to inspect the contents at leisure. The bears may even come into houses: security camera footage shows an upright grizzly using his claws to pull open the double doors of a fridge. That’s a cool customer.

Until now, night vision has allowed many species to outperform humans, and according to Bill the effect of acquiring this superpower can be unsettling.

‘On a shoot in Africa we were in the Jeep, filming lions, when the cameraman motioned for me to take a look through the viewfinder. I did, and this big male lion was staring back at me – completely alert, studying me.

‘It was incredible to see him in detail… and even more incredible to realise that this is how clear the night always appears to him.’

Lions’ sight is at least six times sharper than ours. Prides take advantage of this by waiting for the darkest nights to hunt.

The Netflix crew follows a trio of young lions honing their skills. They are able to slink unseen around a herd of half-asleep zebra – but their scent gives the game away.

When a hippo trots by, one lion hurls himself onto his back. He might as well try to pounce on an armoured car.

Then they find a porcupine, and one of the three ends up with spines sticking out of its muzzle… Finally, they bring down a wildebeest, but are driven away from the kill by a pack of hyenas.

The youngsters are having a bad night – and it’s all captured on film.

Not everything revealed by night vision is so violent… sometimes, it’s delightful. In the Siberian forest, as temperatures fall, the cameras find a pregnant wood mouse.

She’s hunting for a warm crevice in which to give birth and finds one at the foot of a tree – but it’s already taken by a colony of honey bees.

Luckily for her, honey freezes, so the bees must flap their wings constantly to keep up the temperature inside the trunk.

It’s exhausting, and leaves the bees with no energy to worry about visitors.

So the mouse has her babies, and while they’re greedily suckling milk she’s able to stretch up and lick a drop of honey. Luxury.