Australian households will have to absorb the sharpest increase in mortgage pain since the 1980s after the Reserve Bank lifted interest rates for a record eighth consecutive month even as it admitted risks to the national economy were growing.

Following its last meeting of the year, the Reserve Bank board on Tuesday took the official cash rate to a 10-year high of 3.1 per cent. It takes the increase since April to three percentage points, the biggest lift in rates since the bank was fighting rampant inflation in the late 1980s. 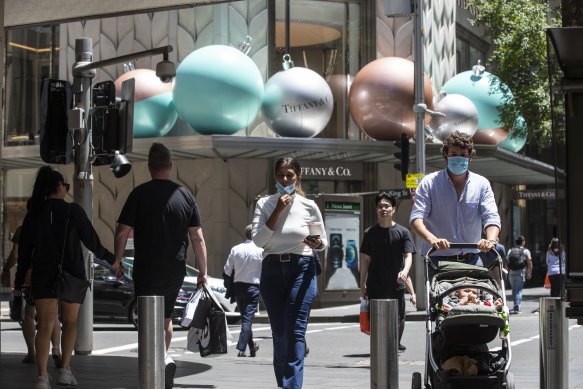 Consumer spending is starting to slow as the RBA’s series of rate rises from May take hold.Credit:Louie Douvis

The cumulative lift in interest rates has added $1418 to monthly repayments on a $750,000 mortgage.

Bank governor Philip Lowe, declaring inflation was too high, said rates had to be pushed higher.

But after rate rises at every board meeting since May, Lowe conceded the full impact of previous rate hikes had yet to hit the economy, which was likely to slow in coming months.

“Household spending is expected to slow over the period ahead although the timing and extent of this slowdown is uncertain. Another source of uncertainty is the outlook for the global economy, which has deteriorated,” he said.

“The [bank] board is seeking to keep the economy on an even keel as it returns inflation to target, but these uncertainties mean that there are a range of potential scenarios. The path to achieving the needed decline in inflation and achieving a soft landing for the economy remains a narrow one.”

Figures due out on Wednesday are expected to show the economy expanded by more than 6 per cent over the past 12 months. But the combination of higher interest rates and a slowing global economy mean the RBA is forecasting growth here to slow to just 1.5 per cent in 2023 and 2024.

Westpac was the first of the major banks to pass on the rate rise, saying it would lift its key mortgage rate by a full quarter percentage point from December 20. It was soon followed by NAB and ANZ, which will lift their borrowing rates on December 16.

Treasurer Jim Chalmers said the Reserve Bank’s rate rises were already having a “harsh and heavy” impact on many household budgets, but the full impact was yet to be felt in the economy.

He said there were welcome signs of wages growth and Australia was receiving strong prices for a number of commodities, which was feeding through to the budget.

But he noted “we are hostage to a number of developments over which we have no control”, pointing to the Ukraine war, China’s COVID-19 lockdowns and potentially extreme weather.

“Of course, as always, as we approach the Christmas season, the festive season, obviously harsh weather events and natural disasters have the capacity to have a substantial impact on our economy and on our budget,” he said.

The December rate rise – the first pre-Christmas increase since 2009 – comes ahead of the key holiday spending period where Australians are expected to spend billions on food, gifts and travel.

Shadow treasurer Angus Taylor said the rate rise would dampen the Christmas cheer for three million Australians with a mortgage, accusing the government of complacency about the nation’s inflation challenges.

“What we wanted to see was a government that honoured its promises – cheaper mortgages, cheaper electricity, lower cost of living, taking responsibility. These were the promises in the election campaign. So far, we haven’t seen them dealing with those pressures and the Reserve Bank is carrying the can,” he said.

The property sector, already hit by falling house prices, said the RBA had erred with its decision.

“The RBA will not restore the economy to stable growth by putting the housing industry through boom-and-bust cycles,” HIA chief economist Tim Reardon said.

“The RBA should have paused to observe the impact of the fastest increase in a generation and not continued to raise rates. Home building was already set to slow significantly in 2023 and today’s rate rise will exacerbate this downturn.”

AMP chief economist Shane Oliver said the increases would take variable rate mortgages to their highest levels in a decade.

“Roughly 10 years of falling mortgage rates have been reversed in eight months,” he said.

“This may not have hit spending much yet, but it will in the months ahead and through next year, particularly as roughly two-thirds of fixed rate mortgage customers reset next year to fixed rates that are more than double current levels.”

Russel Chesler, head of investments and capital markets at VanEck, said higher mortgage repayments were yet to deter shoppers, and noted the Australian Retailers Association increased its Christmas sales spending forecast by $2 billion as Australians enjoy their first Christmas free from COVID restrictions and bushfires in years.

“We believe Australians are enjoying life post-pandemic with a bit of a YOLO attitude, consumers are splashing out now, but might pull back in the New Year as an over-indulgent holiday spending hangover kicks in,” he said.