While 3D movies have faded away, a new dome opening in Sydney next month promises a different kind of immersive cinema.

Wonderdome is a pop-up cinema, being built at the Entertainment Quarter in Moore Park, that will allow audiences to watch films from beanbags in 360 degrees.

The organisers are calling it “virtual reality without the goggles” and say it will be a similar experience to screenings at planetariums, Wisdome in Los Angeles and pop-up venues at the Coachella and Burning Man festivals. 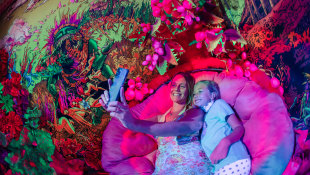 Viewers watch a film in a dome cinema overseas in a similar experience to Wonderdome in Sydney. Credit:TEG/Wonderdome

“You can turn around and see something to your left and your right. Whales and dolphins will fly overhead and you won’t realise until they’re in your peripheral vision.” 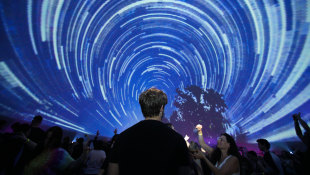 The Wonderdome will immerse viewers sitting in beanbags in films. Credit:TED/Wonderdome

The dome, 22 metres in diameter, will use 12 projectors and a surround sound system. Operated by TEG Live, it will screen films for about 100 patrons under COVID-safe protocols at sessions lasting 30 to 40 minutes.

There will also be a children’s program that includes animations, space and dinosaur documentaries and the Christmas-themed show Snowflake Adventure.

Having worked with domes in the US for 15 years, Deckker says the technology for screening films has improved dramatically.

“In the old days we didn’t have seamless mapping projection technology, also called edge blending,” he says. “There’s now the ability to link together a whole group of projectors. 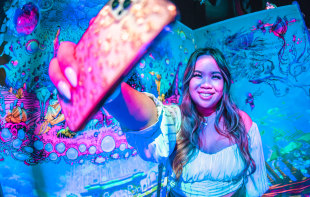 The pop-up Wonderdome, which will have a similar experience to this overseas dome, will open at the Entertainment Quarter, Moore Park, next month. Credit:TEG/Wonderdome

Deckker says that being surrounded by the film makes it “a deeper emotional experience” especially for a film about the wonders of the natural world like Coral Rekindling Venus.

While some viewers found watching movies with 3D glasses disorienting in IMAX and conventional cinemas, Wonderdome promises a different kind of immersive experience.

“Sometimes people don’t realise how overwhelming the experience is because it’s quite immersive,” Deckker says. “Like when you’re in VR goggles for the first time … flying through space or in tunnels, it’s this overwhelming sense of ‘whoa’ – a little bit like a rollercoaster experience.”

While the Los Angeles dome started as a pop-up venue before becoming permanent, Deckker says the plan is to take Wonderdome to Melbourne next. 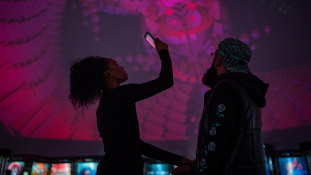 A new generation of immersive cinema in a dome.Credit:TEG/Wonderdome

“It’s a great thing to take on the road because it’s a temporary structure,” he says.

In Sydney, Wonderdome will run from December 4 to January 30. Tickets will be available from Wednesday.