A warning sign telling children they were not allowed to jump on a bouncy castle has caused confusion.

The message leaning against a railing in front of the inflatable read: ‘Strictly no jumping. Parents, please tell your children not to jump.’

Sharing the image on Reddit the original poster wrote the ‘world has literally gone mad’, while others joked that it should be renamed a ‘standy castle’.

Some skeptics believed that the warning sign was in place because the bouncy castle was being displayed for hire, whereas others insisted the sign was fake. 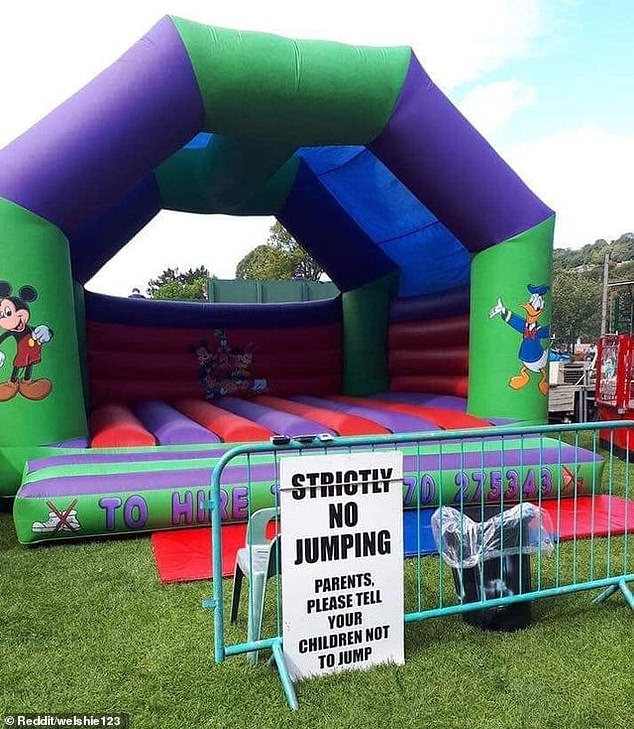 The original Reddit poster shared the image of the warning sign joking that ‘the world has literally gone mad!’

It’s unknown where the bouncy castle, which was decorated with Disney characters, was on display, but it appeared to be in the middle of a large field by the side of another ride.

An advertisement plastered on the castle reads ‘to hire’ alongside a number, with a bin and an empty chair in front of it.

One person wrote: ‘It’s like when they tell you not to crash into people on the dodgems.’

‘No fun allowed. Parents, please tell your kids not to have any fun at all,’ joked one.

‘This is one of the things I absolutely cannot stand when it comes to living in the UK… this sense of being constantly monitored and controlled to a ridiculous degree,’ fumed one. 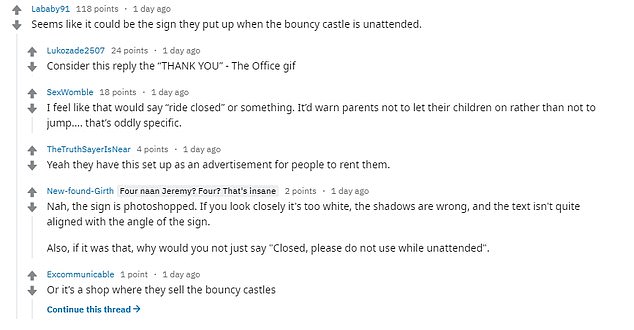 While some believed that it was a case of safety rules gone overboard, others were more skeptical that the sign was fake or that it was to prevent anyone going on it while on display for hire

However others were more dubious of the sign as one replied: ‘Pretty sure this is either a fake, a joke, or a sign to say they are closed. If that helps at all.

‘I see bouncy castles all over the place at parties and fairgrounds, they are still rammed full of kids bouncing on top of each other, don’t you worry.’

‘Seems like it could be the sign they put up when the bouncy castle is unattended,’ added another.

‘Yeah they have set this up as a sign for people to rent them,’ suggested one.

‘I might be off me trolley but I think this is a bouncy castle sample. This might be a place where they display them because it says “for hire”. Assuming people hire them from here and it’s a shop type situation I could see why they wouldn’t want anyone to use them. Again I might be completely wrong,’ said another.