Home buyers fearful of a small interest rate rise next week face much more pain as the Reserve Bank poises for consecutive increases in the official cash rate amid signs businesses are preparing to push prices even higher.

As the Coalition said the surge in inflation was due to international factors beyond its control and Labor accused the government of delivering a “triple whammy” hit to family finances, markets doubled down on expecting a string of interest rate rises through autumn and winter. 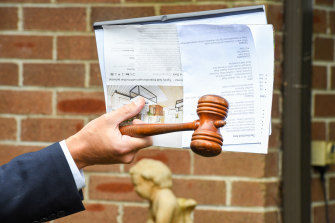 Home buyers should prepare for more than just one or two interest rate rises with economists and markets expecting a string of them through winter.Credit:Peter Rae

Inflation reached a 22-year high of 5.1 per cent in the March quarter while underlying inflation – closely watched by the Reserve Bank – hit 3.7 per cent, its highest level since 2009. A record 70 of the 87 separate expenditure lines tracked by the Australian Bureau of Statistics went up in the quarter.

Markets believe the RBA, which meets on Tuesday, will take the cash rate from 0.1 per cent to 0.25 per cent. It would be the first interest rate increase since November 2010 and the first in an election campaign since 2007.

But markets and economists don’t believe the Reserve will stop after next week’s meeting, with a cash rate of 2.5 per cent by year’s end now priced in. That sort of increase would add $1100 a month to the repayments on an $800,000 mortgage.

Westpac chief economist Bill Evans, who believes the RBA will lift rates to 0.25 per cent next week, said the large amount of debt held by households would temper very aggressive increases in rates.

But he expects a string of consecutive rate rises, starting with another lift in June.

This week’s inflation figures were at odds with the Reserve Bank’s own forecasts and those contained in last month’s budget, which had inflation climbing by 4.25 per cent through 2021-22.

Prime Minister Scott Morrison, who on Wednesday incorrectly claimed twice that the government’s cut in fuel excise would reduce inflation by 0.5 per cent over the next six months (it’s expected to reduce it by 0.25 per cent), said the Coalition understood the real price pressures facing the country.

“We are not out of the woods yet, and we understand that,” he said.

Morrison denied there was any similarity between 2007 – when the Howard government lost office just 18 days after the RBA lifted interest rates – and today, noting the cash rate is just 0.1 per cent compared to 6.75 per cent in 2007.

“We are in the middle of a global pandemic, with a war in Europe. Those situations were not in place in 2007. I think everyone would understand that,” he said.

But shadow treasurer Jim Chalmers, who refused to commit to extending the Coalition’s reduction in fuel excise if Labor wins the May 21 election, said the government had to take responsibility for the pressures facing the economy.

“These interest rate rises will hurt, and Scott Morrison – who takes credit when the economy is going well – won’t take responsibility for the fact that a decade now of attacks on real wages in this country make it harder for people to meet what will be the rising costs of their mortgage,” he said.

Chalmers did signal that Labor would use a budget later in this year to “take into consideration” existing economic conditions.

A survey of businesses by the ABS released on Wednesday found 57 per cent experienced an increase in their costs over the three months to April, with 21 per cent saying they had gone up a “great extent”.

Fifty-two per cent of businesses said they had not increased their prices and of those that had, about 42 per cent said they had only partially passed on those costs to consumers.

Separate bureau figures confirmed how much inflation is coming into the country. Prices on imported products rose by 5.1 per cent in the March quarter to be 19.3 per cent up over the year.

Prices for Australian exports are also soaring. They jumped by 18 per cent in the quarter to be 46.7 per cent up over the year with the biggest increases in coal (32 per cent), iron ore (25.5 per cent), natural gas (13 per cent) and non-monetary gold (4.8 per cent).