When Carrie Symonds went to the ballot box last week, she cast a vote for green living — not, we assume, by supporting a Green Party candidate, but by wearing a dress by London brand O Pioneers made from rolls of unused fabric.

Whether it’s recycled, rented or made from renewable sources, LIBBY GALVIN delves into the stars’ right-on wardrobes . . . 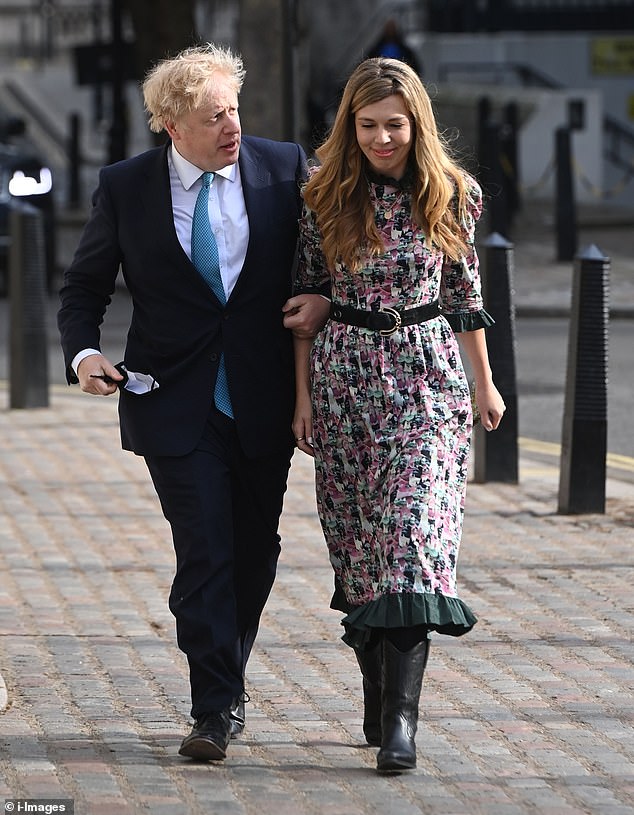 On election day Carrie Symonds (right) wore a dress made by O Pioneers, a lable which crafts every piece from end-of-season and deadstock cotton

O Pioneers, the label that made the dress worn by Carrie Symonds on local election day, crafts every piece from end-of-season and deadstock cotton — old fabric that hasn’t been able to sell.

This makes use of material that would otherwise go to waste to create limited-edition numbers such as the Prime Minister’s fiancee’s pink and green £395 Clara dress.

It isn’t the first time Carrie has worn her eco-leanings on her sleeve. For a Pride of Britain Zoom call in November, she wore a £285 The Pleat dress by Seraphina, a brand which makes all its clothes from organic cotton.

It also sends orders by carbon-neutral courier to avoid contributing to climate change.

Carrie has also been seen in a £225 Liberty-print Justine Tabak dress made of biodegradable cotton with non-polluting dye, and often rents dresses in order to reduce waste. 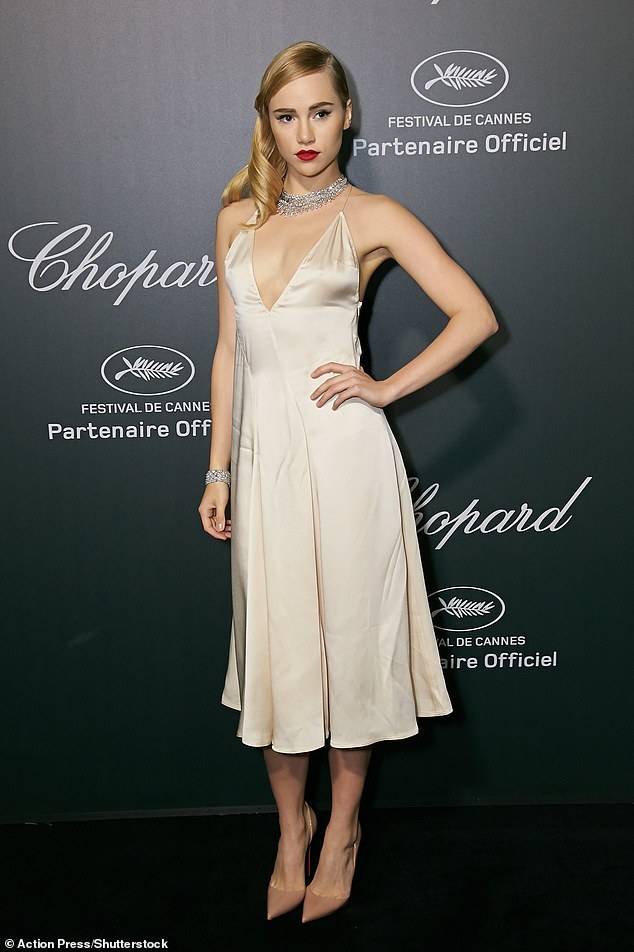 Suki Waterhouse rents clothes from HURR Collective as well as opting for Stella McCartney’s vegan designs, like the dress above

Suki saves the world by renting her wardrobe

Actress and model Suki Waterhouse, 29, loves borrowing from HURR Collective, which allows her to wear all sorts of clothes without feeling wasteful — or needing to find space in her wardrobe for extravagant creations such as a pink Georgia Hardinge Starlet meringue dress (rent from £55, retail £380).

She’s also often seen in clothes by Stella McCartney, whose designs are all vegan but not at all financially accessible — think £1,500 plus for a slip-style dress. 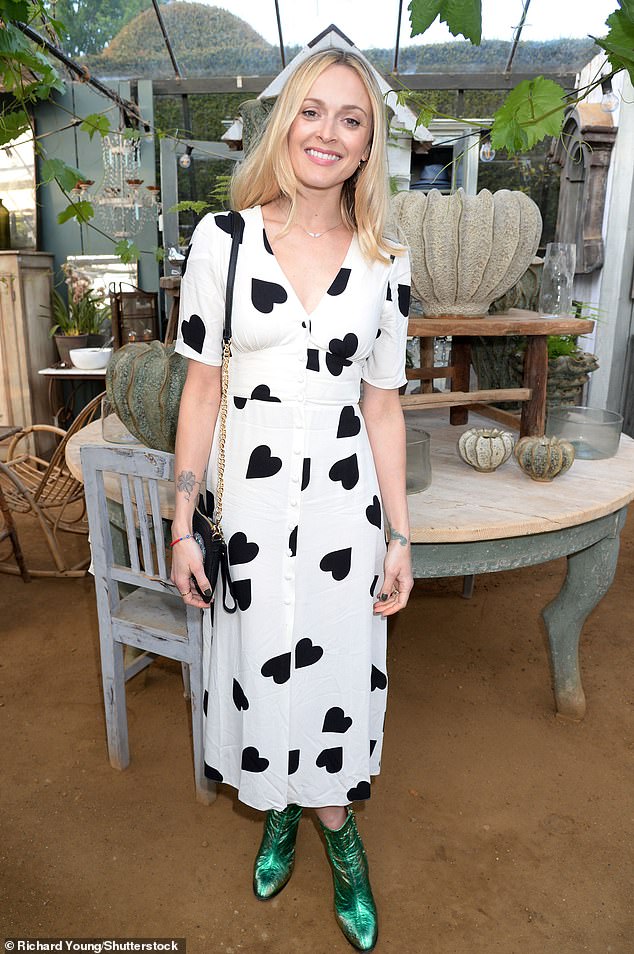 Finally, a set of sustainable threads the rest of us might be able to afford! TV presenter Fearne Cotton’s forays into fair fashion won’t break the bank.

Her closet is full of finds, such this £32 heart-print dress by Nobody’s Child, an affordable online-only brand — also stocked this year by M&S — which promises that 90 per cent of this season’s offerings are made from ‘responsible fabrics’ such as organic cotton and recycled synthetics.

A few weeks ago, Fearne forked out somewhat more — £245 — to buy a floral spring dress by Yolke, whose collection focuses on ‘eco-friendly plant-based fabrics that are locally sourced and produced in Europe from family-run factories’. 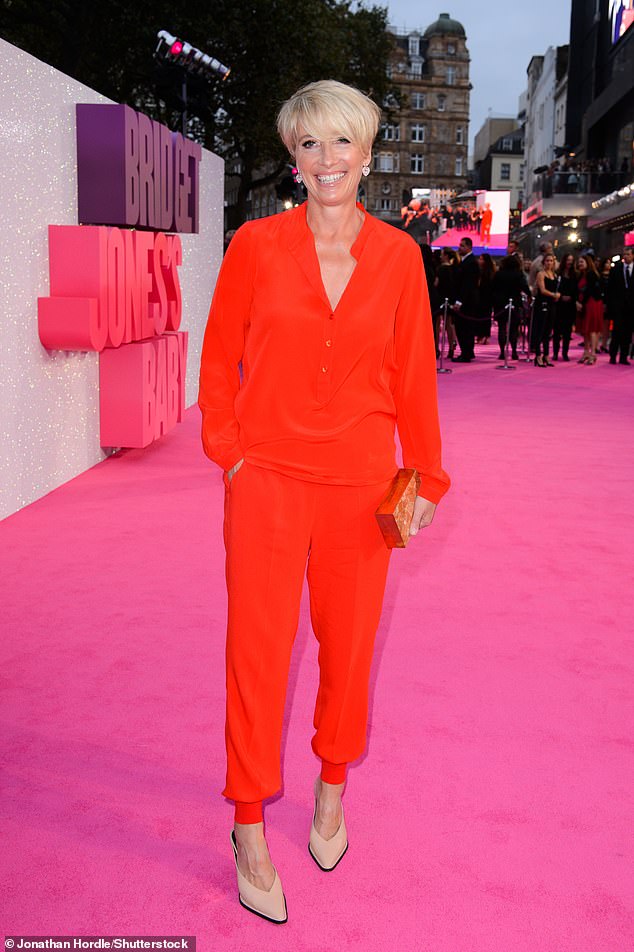 There’s nothing like a dame in a vegan outfit . . .

Fast becoming almost as famous for her presence at climate-change protests as for her award-winning films, eco-warrior Dame Emma Thompson makes sure her wardrobe works hard for animal welfare.

She dresses almost exclusively in Stella McCartney suits on the red carpet — costing from £1,000 to £2,000 — along with her stylish vegan footwear (£630).

Stella has been animal activists’ go-to brand since her label’s inception, using no animal products whatsoever in her designs.

That means not only no fur, leather or feathers, but as high-tech alternatives become available, no silk either.

Instead, computers spin a yarn made of yeast into an eco-friendly alternative, while leather is replaced with a lookalike material made from mushroom roots. 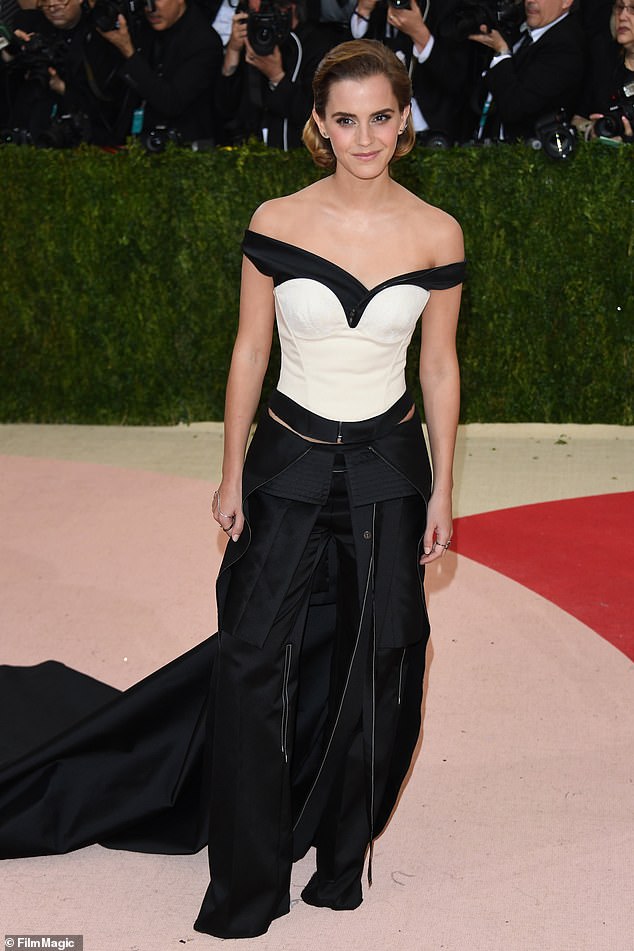 Emma Watson went to the Met Gala in custom Calvin Klein made from sustainable cotton, satin and taffeta woven from recycled plastic 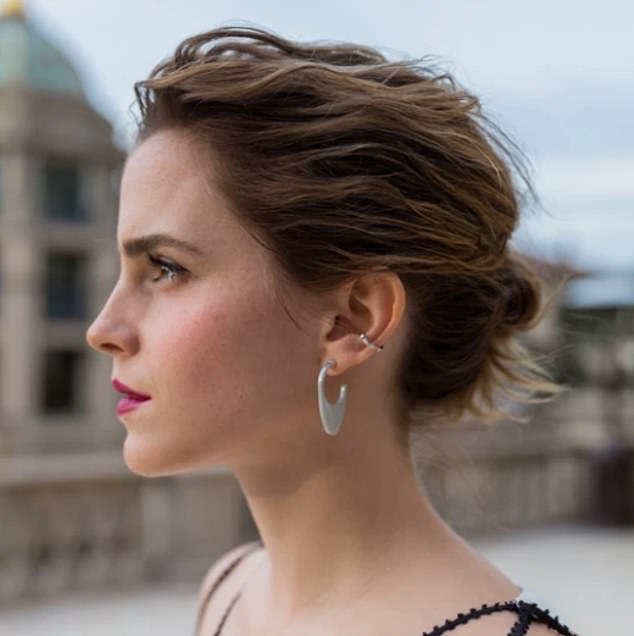 Harry Potter star Emma Watson has dedicated herself to numerous good causes, from promoting female empowerment as a UN Goodwill Ambassador to announcing she’ll wear only sustainable fashion on the red carpet.

‘The fashion industry is the second-biggest pollutant of fresh water on the planet,’ she said when she made the promise three years ago.

And she hasn’t put a fashionable foot wrong since, recently taking a selfie in a secondhand jumper to launch Thredup’s ‘Fashion Footprint’ carbon calculator (which works out how much of an impact your wardrobe is having on the environment and how to limit the damage).

Emma went to the Met Gala in custom Calvin Klein made from sustainable cotton, satin and taffeta woven from recycled plastic, and a recent sustainable style choice is her £245 bag by Bottletop made from ring pulls. Still, it’s got nothing on her Article22 earrings, ‘upcycled’ from Vietnam War bomb shrapnel (£92). 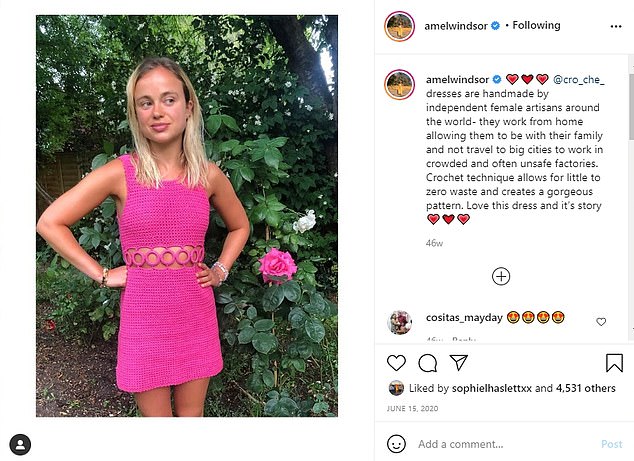 Once named the most beautiful royal, model Lady Amelia Windsor, 25, is also one of the most socially conscious

Once named the most beautiful royal, model Lady Amelia Windsor, 25, is also one of the most socially conscious.

The clothes she sports on her Instagram page are testament to her love for green living: in one recent post she showed off a £295 recycled leather bag, made with her input, by Been London.

Another showed her in this £225 hot pink dress from ethical label Cro-Che, which claims crochet ‘is one of the most planet-positive ways of producing garments . . . because there is zero to very little waste. You can create something beautiful using only the material you need’.

So it’s fitting that she still flies the flag for sustainability, usually by borrowing the clothes she wears in public.

Dress rental firm Hurr is a favourite, which is where she hired this cutaway dress by Aje (from £64 to hire, retail £460).

She also wears responsibly sourced — if expensive — tracksuits from Raey Official, which promises to stop modern slavery (sweaters from £525, bottoms from £350). 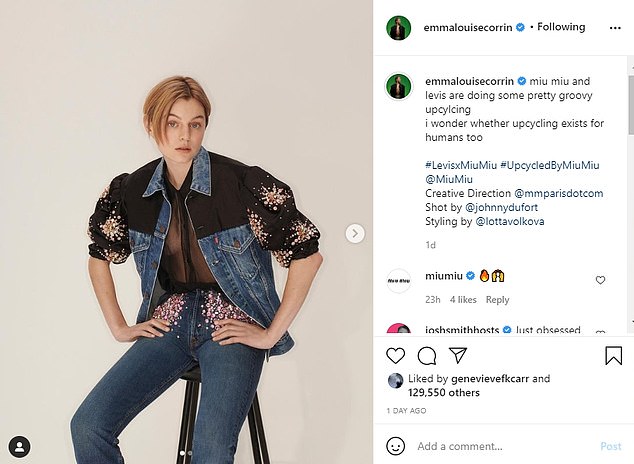 Emma Corrin has shown off a collection of upcycled Levi’s, embroidered by designers at Miu Miu, on Instagram

She stunned in the latest season of The Crown as a young Princess Diana, and actress Emma Corrin is making waves when it comes to sustainable style, too.

Photos of her walking her dog recently show her in a jacket by Bode menswear, handcrafted from antique textiles and discarded grain sacks, and likely to have cost upwards of £1,000.

Emma has also shown off a collection of upcycled Levi’s, embroidered by designers at Miu Miu, on Instagram. ‘The lives of garments worn and loved in the past are extended, refreshed — renewed,’ gushes Miu Miu. 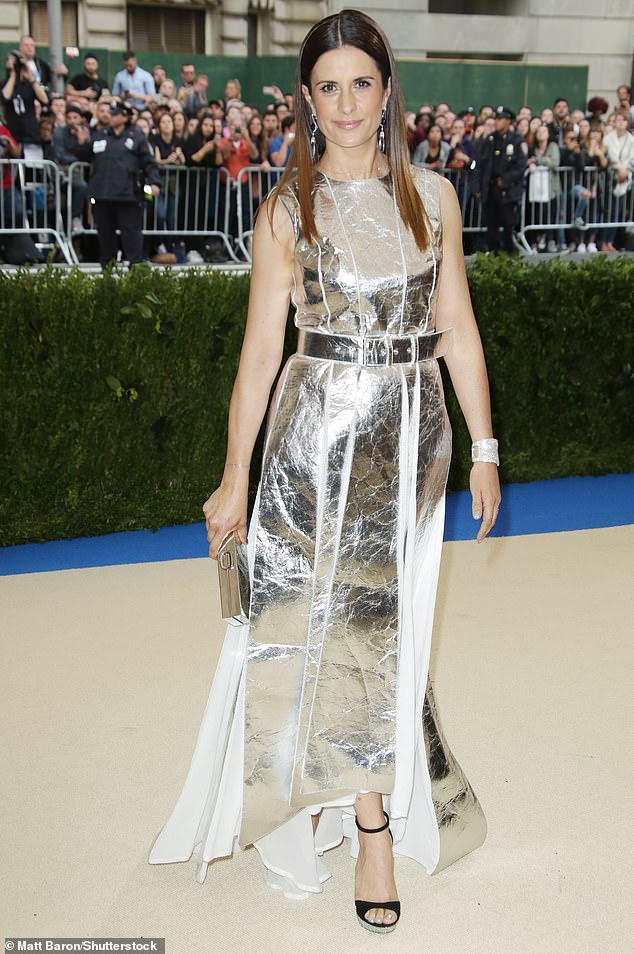 Livia Firth received an award from the United Nations for her Green Carpet Challenge concept, which encourages stars to dress sustainably on the red carpet throughout the awards season

Livia Firth is queen of the green red carpet

Livia Firth, the ex-wife of screen hunk Colin, is the Queen of the Green Carpet. The 51-year-old Italian-born fashionista has had a fantastic influence on the A-list, encouraging ethical practices wherever she goes.

Mother-of-two Livia received an award from the United Nations for her Green Carpet Challenge concept, which encourages stars to dress sustainably on the red carpet throughout the awards season.

She certainly practises what she preaches, having recently been seen in a Gucci silk skirt that she has worn at least 30 times.

Livia famously donned a silver Pinatex dress (a leather alternative made from pineapple leaves, a by-product of the pineapple harvest in the Philippines) at the 2017 Met Gala (left). And in 2012 she wore an Armani dress that had been made from recycled plastic bottles.

‘Call it ‘eco-fashion’ if you like, but I think it’s just common sense,’ Livia says. 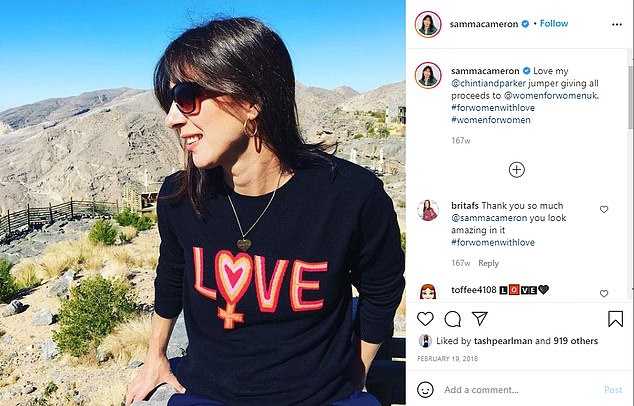 Samantha Cameron was recently keen to show off her Chinti & Parker Love jumper (£195), made to raise money for female survivors of war

Carrie is not the only PM’s partner drawn to clothes that do good — Samantha Cameron was recently keen to show off her Chinti & Parker Love jumper (£195), made to raise money for female survivors of war.

However, the biggest difference Sam Cam can make lies with the clothes she designs herself.

Her label Cefinn has a strict sustainability code, promising to work with factories and mills committed to reducing their environmental impact by cutting water consumption, using less plastic and fewer harmful chemicals, minimising waste — as well as pledging to make all packaging fully recyclable.

Sam is also an ambassador for Smart Works, which provides officewear for women who cannot afford new outfits for job interviews.